A New Mexico ranching family’s livelihood is being threatened by an endangered mouse.

The meadow jumping mouse was recently designated an endangered species. Now, officials are considering building 8-foot-tall fences around protected areas, which would prevent the family’s animals from grazing.

In a statement, Robert Trujillo, of the U.S. Forest Service, said, “It’s been our experience that a fence like that to protect that occupied habitat seems to be the best way we can do our affirmative duty and protect that habitat.”

Seton Motley, president of Less Government, was on “Fox and Friends” to discuss the situation.

“Why don’t they apply that logic to the southern border?” he said of the proposed fence.

Captain Obvious knew this years ago. 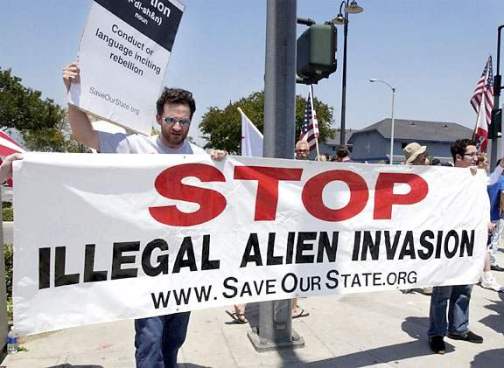 Photo via US Daily Review

A top United States general in charge of protecting the southern border says he’s been unable to combat the steady flow of illegal drugs, weapons and people from Central America, and is looking to Congress for urgent help.

Marine Corps Gen. John Kelly, commander of U.S. Southern Command, has asked Congress this year for more money, drones and ships for his mission – a request unlikely to be met. Since October, an influx of nearly 100,000 migrants has made the dangerous journey north from Latin America to the United States border. Most are children, and three-quarters of the unaccompanied minors have traveled thousands of miles from El Salvador, Guatemala and Honduras.

“In comparison to other global threats, the near collapse of societies in the hemisphere with the associated drug and [undocumented immigrant] flow are frequently viewed to be of low importance,” Kelly told Defense One. “Many argue these threats are not existential and do not challenge our national security. I disagree.”

In spring hearings before the Senate and House Armed Services Committees, Kelly said that budgets cuts are “severely degrading” the military’s ability to defend southern approaches to the U.S border. Last year, he said, his task force was unable to act on nearly 75 percent of illicit trafficking events. “I simply sit and watch it go by,” he said. But the potential threats are even greater. Kelly warned that neglect has created vulnerabilities that can be exploited by terrorist groups, describing a “crime-terror convergence” already seen in Lebanese Hezbollah’s involvement in the region.

Before anyone jumps on my back and tells me that you cannot impeach an illegal president, please don’t. I have read all the stories and have even posted a few on the subject but what if he was impeached and refused to leave office????

If Obama should resign, all his activities and “accomplishments” will remain in effect!

If he is impeached and convicted, all his Executive Orders, signatures on passed laws, become NULL and VOID thus setting the stage back to January 20, 2009 before he took that oath (that’s debatable) 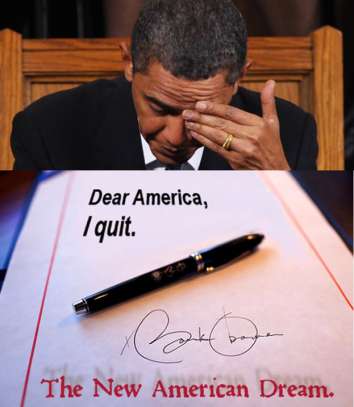 If we impeach him now, Harry Reid will trash it in the Senate thus preventing the trial and conviction.

So the question is this: How do we keep him from resigning before the Republicans can take over the Senate?

HAPPY 4TH OF JULY, 2014! It is critical that average voters know and understand all of Obama’s scandals before the 2014 mid-term elections. Sometimes presentation matters, so here they are, Obama’s worst and most mind-blowing scandals, Hollywood special effects style. There is no exaggeration in the narration, unfortunately; were this nation only fortunate enough for that to be true. But the facts presented her are actual and not exaggerated. It all really is as bad as it says. IF YOU ARE CONSERVATIVE, PLEASE SHARE THE LINK TO THIS VIDEO; EVERY US voter absolutely, positively must know what is covered in this video before the November elections of 2014. Also, see our other videos and visit the website at http://www.Benghazi-Truth.blogspot.com

We would like to thank TEA PARTY NEWS NETWORK (which broke the info) http://www.tpnn.com/2014/07/04/orwell… and TEA PARTY.ORG http://www.teaparty.org/orwells-obama… … for reporting that this video can claim a couple of history-making precedents of which we were, frankly, unaware. Thank you for your generous and gracious coverage.

Those in the federal government seem to desire and promote the steady creep of federal powers over their intended balance to State rights.  Since Obama’s election and during the reign of Eric Holder as Attorney General, a clever game of law enforcement / non enforcement has been in the works.  Never has our country just rolled over and watched such proceedings.  Regardless of your stance on certain issues, procedure must win out, not whimsical and desultory enforcement of law and total disregard for oaths taken.

There has been the selective non enforcement of duly passed law by this administration.  Inconsistent at first blush is the allowance of States to permit legal marijuana use.  This is in conflict with federal laws but is approved by the administration.  By what power do they ignore law?

Yet when states such as Arizona attempt to enforce laws completely consistent with federal laws, the Department of Justice sues.  How absurd the inconsistencies appear to be, but there is a steady stream of action here.  Law is in effect being rewritten by either permitting the breaking of existing law, or failing to enforce passed law and making certain, by hiding behind the supremacy law, that States do not pick up the duty.  Case in point is the illegal immigration situation.  Arizona is told it has no “right” to police illegal immigration as passed federal law dictates the federal government should, yet Colorado is free to legalize marijuana in direct conflict with federal law.

In actuality, there is consistency.  This administration ignores what it chooses in order to achieve its goals.  It then ensures that any inaction by their choice is not countered by any action from a State. (Suing AZ)

The Constitution is twisted to meet their needs in one instance, sighting that States cannot enforce federal law, yet no one points to the oath of office taken by both Obama and Holder to enforce the laws of the nation and uphold the Constitution.

As Madison said in Federalist 45,

“The powers delegated by the proposed Constitution to the federal government are few and defined. Those which are to remain in the State governments are numerous and indefinite.”

“The powers not delegated to the United States by the Constitution, nor prohibited by it to the States, are reserved to the States respectively, or to the people.”

Yes, there are 50 stars on that flag, not 57 and not just one big one.  And as Speaker Boehner threatens to sue the President, and the President gleefully awaits his resultant “victim status” that all liberals seek, more stringent legal procedures seem required.  Fundamental transformation indeed.

A float in the city of Norfolk’s Fourth of July parade has sparked a lot of controversy. The float showed an outhouse with a dark figure using a walker on the outside. The outhouse was labeled “OBAMA PRESIDENTIAL LIBRARY.” 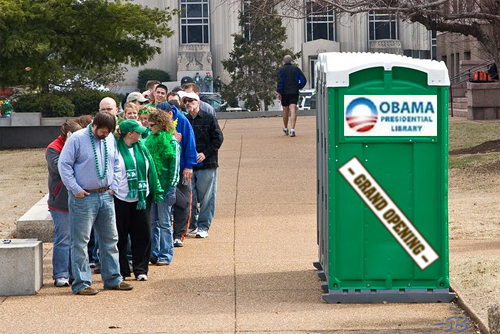 Obama’s Brownshirts: “It’s not fascism when we do it!”

Yesterday in Murrieta California the tensions reached a new level as pro-amnesty activists took to desecrating the American flag, and several protesters were quoted as shouting, “F*ck America.”

Earlier in the week it was reported that anti-illegal immigration protesters gathered to try to stop busloads of illegal immigrants being dumped into their area:

Anti-immigration protesters impeded the arrival of several buses transporting undocumented immigrants into a US Border Patrol station in Murrieta, California on Tuesday, some 60 miles north of San Diego.

The arrival of the group of Central American families had been decried by Murrieta’s mayor, Alan Long, who alleged that the group of immigrants, adults with their children numbering about 140 people, represented a public safety threat to the community.

These are simply concerned citizens taking advantage of their First Amendment rights.

This quickly drew the ire of amnesty supporters who have also gathered to protest in Murrieta. Yesterday, those protests hit a new level of disgust as amnesty supporters used profanity, burned at least one American flag and shredded several more. Here are a couple of pictures via Breitbart.com:

Breitbart News obtained the above photograph, which shows a burnt flag on the ground, from an anti-illegal immigration activist who was monitoring the pro-amnesty demonstration.

In addition, Breitbart News obtained photographs of torn-up flags that pro-amnesty demonstrators had impaled on a fence.

When witnessing such atrocities it is even harder to swallow being characterized as a “domestic terrorist” or “right-wing extremist” by my own government. Yet, it is those who actually care about the future of America that are being painted as villains. Those who seek to tear her down are welcomed with open arms.

I believe in free speech and I will use my own right to it to say exactly what I believe about those who would sink to such levels.

These are spoiled ingrates who think that America owes them something. America did not become great because of people like this. To the contrary, this country is being torn down because of people like this. They have a criminal mentality and are supporting the criminals who are coming here illegally over the law-abiding citizens, who are trying to look out for all of us.

They are frankly too stupid to see it.They are brainwashed and they are the epitome of the term “useful idiot.”

You only need to read this quote from the Breitbart article to realize where these people are coming from and what the opposition is truly made of:

Bonnie Lewis, an anti-immigration activist, told Breitbart News that she saw one of the pro-amnesty activists dragging an American flag on the ground.

Another anti-illegal immigration activist said that pro-amnesty demonstrators called her a “f***ing whore” in Spanish, and shouted, “F*** America!”

This is the kind of trash we are dealing with in America, and they are multiplying. I’m sure that many of those protesters aren’t even legal. If they are then many have obviously not bothered to learn the language. They have no idea what the true price of liberty is and they have no idea what that flag means to us. They don’t understand 238 years of history that were celebrated yesterday.

Thank God for good people like Bonnie Lewis who have the guts to stand up for the truth. This is not about a humanitarian effort. This is about fighting against a deliberately contrived event that is aimed at the further crippling of America.

We can not afford to give up.

We will find a way.
Read more at http://freedomoutpost.com/2014/07/pro-amnesty-activists-burn-rip-trample-american-flag-independence-day/#Hh8TrTfg7yzatJK4.99