(Washington, DC) — Judicial Watch announced today that it has filed a lawsuit against the Department of Justice for all records of communication from January 2016 to January 2018 between former FBI General Counsel James Baker and anti-Trump dossier author Christopher Steele.

Judicial Watch filed the lawsuit in the U.S. District Court for the District of Columbia, seeking  to compel the FBI to comply with a January 5, 2018, FOIA request (Judicial Watch v. U.S. Department of Justice (No. 1:19-cv-00177). The lawsuit seeks:

Any and all records of communication, including but not limited to emails, text messages and instant chats, sent between Baker and any of the following individuals: former British intelligence officer Steele, principal of Orbis Business Intelligence, Ltd.; Glenn Simpson of Fusion GPS; former GPS contractor Nellie Ohr; and/or David Corn, a reporter with Mother Jones magazine.

The FBI claimed it had no responsive records, but Baker was deeply involved with the FBI’s investigation of the Trump campaign and is currently the subject of a criminal investigation for leaking to the media.

The FBI’s “no records” response is belied by Baker’s closed-door congressional testimony in October 2018, in which he reportedly testified that David Corn, a reporter at the far Left Mother Jones magazine, had provided him with a copy of the anti-Trump dossier the day after President Trump’s 2016 election victory. Baker also reportedly testified that he believed at the time Corn received the dossier from Simpson, the co-founder of Fusion GPS.

Judicial Watch in August 2018 filed a related lawsuit seeking records about the Ohrs’ involvement in the anti-Trump dossier and the FBI’s meetings with the Democratic National Committee’s law firm Perkins Coie. In November Judicial Watch filed a lawsuit about the firm itself.

In August 2018, Judicial Watch released FBI records showing that Steele was cut off as a “Confidential Human Source” after he disclosed his relationship to the FBI to a third party. The documents show at least 11 FBI payments to Steele in 2016.

Baker also advised top FBI officials during the Hillary Clinton email scandal. He left his role as general counsel in January 2018 and resigned from the FBI in May 2018.

“The real collusion scandal of the 2016 election is the effort by the Clinton campaign and the Obama DOJ/FBI to spy on and destroy President Donald Trump,” Judicial Watch President Tom Fitton said. “And it looks like the FBI is covering up documents on this Russiagate scandal, which is why Judicial Watch is again in federal court.”

About 20 tons of gold from Venezuela’s central bank was ready to be hauled away Tuesday on a Russian airline’s Boeing 777 that landed in Caracas a day earlier, a Venezuelan lawmaker wrote on Twitter.

We reported earlier that the former Mexican President has been aligned with Mexican cartels.  He’s accused of taking millions from the cartels –

Alex Cifuentes, who says he was a close associate of Guzmán for years, told a New York City courtroom that he had told authorities of the bribe in 2016.

Guzmán is accused of being behind the Sinaloa drug cartel, which prosecutors say was the largest US drug supplier.

Guzmán, 61, has been on trial in Brooklyn since November after he was extradited from Mexico to face charges of trafficking cocaine, heroin and other drugs as leader of what the US has called the world’s largest drug cartel.

The timing of the former Mexican President being connected with Mexican cartels is rather significant.  A former Democrat believes the real reason Democrats don’t want a wall on the US – Mexican border is related to the story above.

For anyone who doesn’t believe they’re all very good friends and quite connected, here’s a picture of Pelosi, my former friend Kyrsten Sinema, and someone else, at a baseball game together. It is what it is. 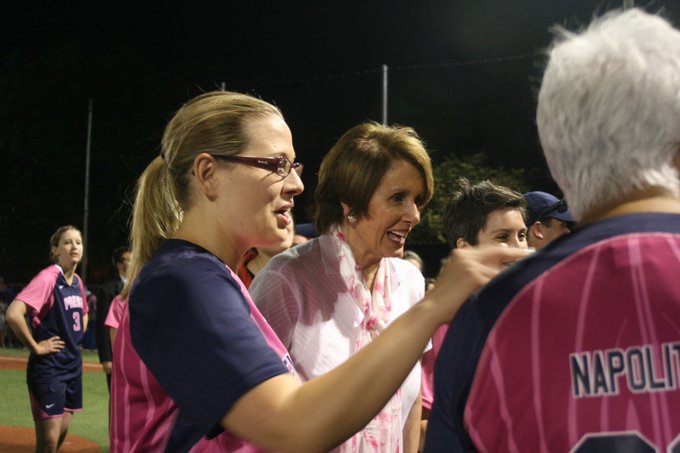 With as much influence running up in to their system now in the form of direct and indirect #Mexican billions, Patriots might start to understand the #TRUTH about why these two are feeling so much pressure recently. pic.twitter.com/VcOWXTMKjq

Peterson may very well be right. We know that a big time lawyer for the Mexican cartels donated to Hillary Clinton.  We also know that it was reported that Julian Assange reported that he had evidence that the Clinton Foundation received $15 million from the Mexican cartels.  On 9 January 2017, the web site Times.com.mx published an article reporting that Mexican Drug kingpin Joaquín “El Chapo” Guzmán had donated millions of dollars to Hillary Clinton’s 2016 presidential campaign, claiming that WikiLeaks founder Julian Assange had broken the news.

Guest post by Joe Hoft The Democrats aggressively block the President’s desire to protect Americans and build a border wall on the southern border with Mexico.  Democrat attempts to block the wall in…

Oklahoma Locked and Loaded
by 1dragon

Where have I heard this before? END_OF_DOCUMENT_TOKEN_TO_BE_REPLACED

During Industry Day at the Range at SHOT Show 2019, I had the opportunity to talk with Kris “Tanto” Paronto, one of the men who survived the attack in Benghazi.

Bottom line is this: There has to be a politician that goes in there and says, ‘You know what? We left these guys behind. And we tried to cover it up. And then we lied about it. And we utilized our own justice system and our own intel agency to hand off responsibility.’ And now they’re being held responsible, whether it’s jail time or mass humiliation…I don’t have a problem with that. It’s necessary. There’s enough information out there to show that they lacked any integrity…

Kris: With “13 Hours” being out there, we’ll always memorialize the guys. Now the question is, are we going to have political officials, the Comeys, the Brennans, the Hillary Clintons, go in there and try to cover it up?

Paronto said he continues to talk about that tragic day in Benghazi because it’s important to help memorialize his friends, but because it’s also healing for him. Talking about losing his friends has been a way for him to deal with what took place on September 11, 2012.

“Historic” political figures may be well worth celebrating, but only if they are something other than ignorant and ill-tempered human wrecking balls. “Historic” doesn’t necessarily mean “good.” Barack Obama’s “historic” tenure as our nation’s first black president, for instance, was tainted by the somewhat inconvenient fact that he is a lifelong Marxist who has spent all of his adult years allying himself with America-hating revolutionaries like Bill Ayers and Berhardine Dohrn, and with bilious Jew-haters like Jeremiah Wright, Rashid Khalidi, and Al Sharpton. When Hillary Clinton made her own “historic” attempt to become our first female president, her campaign was tarnished by the similarly unpleasant fact that she was the most corrupt presidential candidate who ever breathed. And when Keith Ellison “historically” became the first Muslim elected to Congress, he brought with him a long history of allegiance to the most prolific Jew-hater in living memory, Louis Farrakhan.

And now, Rashida Tlaib and Ilhan Omar, the first two Muslim women ever elected to the U.S. House of Representatives, have stepped forth to become our latest “historic” icons.

Tlaib, who served in the Michigan state legislature from 2009-15, has cultivated noteworthy ties to a number of radical Islamist organizations. In 2009, for instance, she received a Community Service Award from the Hamas-linked Council on American-Islamic Relations (CAIR), a group she has praised for its “invaluable” and “vital” “advocacy efforts” on behalf of “those who don’t have the resources to defend themselves.” Moreover, Tlaib has spoken at banquets and conferences hosted by CAIR, the Muslim American Society, and the Islamic Circle of North America. She also has received numerous financial donations from individuals affiliated with CAIR, the Islamic Society of North America, the Muslim Students Association, and the Muslim Public Affairs Council. Most of these entities are affiliated with the notorious Muslim Brotherhood, an Islamic supremacist organization and a fountainhead of extremism/terrorism.

In an October 2015 post in her Twitter account, Tlaib linked to an article lauding Black Lives Matter activists in Chicago for supporting “a Palestinian woman threatened with deportation.” The woman in question was Rasmea Odeh, a Popular Front for the Liberation of Palestine terrorist who had played a central role in a deadly 1969 bombing in Jerusalem.

A proud member of the Democratic Socialists of America, Tlaib said in February 2018 that she planned to openly run for Congress as a socialist who would help voters understand that “the labor movement was founded on socialism.”

When asked to describe a proper “solution” to the Israeli-Palestinian conflict, Tlaib replies: “One state. It has to be one state. Separate but equal does not work.” In other words, she supports the permanent dissolution of Israel as a Jewish state, in favor of a new nation wherein a Palestinian majority would dominate the Jewish minority. Three weeks ago — on her first official day as a new Member of Congress — someone in Tlaib’s entourage affixed, to a wall map in the congresswoman’s office, a piece of paper bearing the name “Palestine” along with an arrow pointing to the spot on the map where Israel was located.

That same day, Tlaib told a raucous crowd of supporters that Donald Trump’s days as President were numbered: “We’re going to go in there, and we’re going to impeach the motherfu**er!” One particularly notable attendee at Tlaib’s swearing-in ceremony was Abbas Hamideh, the executive director and co-founder of Al-Awda, an organization that advocates the permanent dissolution of Israel as a Jewish state. Over the years, Hamideh has repeatedly stated his belief that “Israel does not have a right to exist”; equated Zionism with Nazism and the genocidal ideology of ISIS; and voiced support for the terrorist organization Hezbollah and its leader, Hassan Nasrallah.

Tlaib’s fellow freshman in Congress, the Somali-born Ilhan Omar, is a former Muslim Students Association member and a lifelong anti-Semite. On November 16, 2012 – just a few days after Gaza-based Hamas terrorists had launched more than 150 deadly rockets into the Jewish state, prompting an Israeli military response – Omar tweeted that “the apartheid Israeli regime” had “hypnotized the world” in order to conceal its own “evil doings.”