Before the Obama Taqiyya Library (Lie-Berry) is built and populated with empty or sealed records, who will act as a real investigative reporter who will unveil the past fraudulent 8 years?

Some areas that should be explored:
* When did he have his name changed from from some birth name, to Soetoro, then back to Obama?
* When will his college records be unsealed?
* Under what name did he register for college? Was he listed as a foreign student?
* What name was used on his passport when traveling to the Middle East in his college years?
* How did all of his records disappear from his days as an Illinois Representative, then Illinois Senator? Why is the only artifact left behind in Illinois the chair he used in the Illinois legislature? How and why were all of his travel records purged?
* How did he get, then lose, his law degree?
* What did he really do as Editor of the Law Review?
* Why can’t all of his records be un-sealed?
* How did Michelle get, then lose, her law license? (There are some details, but not full details.)
Michelle? Too many questions to list…..

In fact, no alien has a right to come to this country, let alone an entitlement to the liberties assured by our Constitution. The President has complete latitude in determining who is admitted into the United States. His bipartisan predecessors exercised this power in recent decades to block immigration by adherents to hostile ideologies like Naziism or communism that require their adherents to seek the destruction of our form of government.

Mr. Trump recognizes that we must not import in our time more immigrants committed to a similar outcome in the name of imposing here another supremacist totalitarian ideology, Islam’s Sharia.

A grand jury in south Florida just indicted the Ft. Lauderdale Airport shooter, but the feds are still in cover-up mode so terrorism isn’t even mentioned though an FBI agent testified in court that the attack was carried out on behalf of the Islamic State of Iraq and Syria (ISIS). Instead the gunman, who years ago took on an Islamic name, was charged with murder for killing five people and wounding six others during a bloody rampage in the airport’s baggage claim area earlier this month.

Days after the massacre that shut down one of the state’s busiest airports, Judicial Watch reported that the shooter, Esteban Santiago, is a Muslim convert who years before joining the U.S. Army took on an Islamic name (Aashiq Hammad), downloaded terrorist propaganda and recorded Islamic religious music online. A California-based investigative news site dug up the information while the mainstream media blindly repeated the Obama administration’s version of the facts though early on a photo surfaced of Santiago making an ISIS salute while wearing a keffiyeh, a Palestinian Arab scarf. This was disturbingly reminiscent of the Benghazi cover up, in which the president and his cohorts knowingly lied to conceal that Islamic terrorists attacked the U.S. Special Mission in Libya.

The records contradict the official government version that Santiago is a mentally ill, Hispanic Army veteran who became unhinged after a tour in Iraq. Additionally, at a bond hearing in a south Florida federal court last week, an FBI special agent with the Joint Terrorism Task Force (JTTF) testified that Santiago carried out the attack on behalf of ISIS. The agent, Michael Ferlazzo, also said that Santiago had communicated with Islamic terrorists who were planning attacks on internet “jihadi chat rooms.” Regardless, the initial criminal complaint omits any reference to terrorism. It charges Santiago with performing an act of violence at an airport, using a firearm in the course of a crime of violence and causing death through the use of a firearm. It also reveals that he fired 10 to 15 rounds of ammunition from his firearm, aiming at his victims’ heads and walking while shooting on a methodical manner.

This week’s 22-count grand jury indictment also fails to mention terrorism, even though it was issued after the JTTF FBI agent confirmed Santiago’s ISIS ties in court. Instead, it only charges Santiago with five counts of causing death at an international airport, six counts of causing serious bodily injury at an international airport, five counts of causing death during a crime of violence and six counts of using a firearm during a crime of violence. Santiago “committed the offense after substantial planning and premeditation to cause the death,” the indictment states. The document is longer (19 pages) than the original complaint because it mentions the victims by name in the different counts. The grand jury also adopted special findings seeking the death penalty for Santiago though federal prosecutors will ultimately decide that.

This column can be deemed Trigger Warning-worthy because it t mocks trigger warning addicts and others dependent on post-adolescence pacifiers.

Short of declaring reality off-limits, the number of things being declared persona non grata by college students seems to be multiplying.

However, is it my imagination or are today’s college students establishing a kind of secular Sharia, sans a mystical deity, without possessing an inkling of knowledge of Islamic law? It could go under another name most college students would be horrified by but unable to refute: Fascism. Historically, Fascism as a collectivist movement, relied on physical force to propagate and impose its various statist agendas, from Hitler’s racist supremacism, to the Perons’ class warfare against the upper and middle classes.

Sharia is a code of Islamic “law” that defines acceptable behavior and “codifies” do’s and don’ts for the average, gullible, brain-stunted Muslim. By its nature, and because of its purpose, it is totalitarian; it prescribes and governs virtually every action, decision, and choice of an individual.

Like Nazi ideology (and it is no coincidence that Islam is compatible with Nazism [National Socialism], and vice versa), Islam erases the individual, requiring him to live, breathe, and eat for Allah in across-the-board submission. It even prescribes his bodily functions and behavior in the bathroom.

END_OF_DOCUMENT_TOKEN_TO_BE_REPLACED

In the attached article from Brietbart, Judicial Watch President Tom Fitton weighs in on the burgeoning debate over whether illegal aliens voted in the 2016 presidential election…

And he makes it abundantly clear that those who think they didn’t need to think again:

Are we supposed to be so naive as to think that tens of millions of people are here, present in the United States, and none of them are illegally voting? In states where you don’t have voter ID, in states where most voter registration, you’re not required to certify citizenship, other than signing and saying you’re a citizen?

Fitton knows whereof he speaks.… Both because Judicial Watch has taken the lead in exposing and fighting voter fraud for decades … And because when it comes to protecting election integrity, he wrote the book – or, at least, a compelling chapter.

It’s in his recent bestseller, Clean House, and you can read it here.

As the fight over voter fraud continues to heat up, please feel free to call Jill Farrell (202-664-5188 / jfarrell@judicialwatch.org) for an interview with Tom Fitton — or with the director of Judicial Watch’s Election Integrity Project, Robert Popper.

We are whistleblowers as eye witnesses to the war crimes committed in Libya by Hillary Clinton. We are the official spokespersons for the tribes of Libya and have given actionable intelligence on the ground in Libya to the DIA who agent (Eric Maddox) was in our home many times. We have also had the FBI and CIA in our home (the CIA was brought into our home by Glenn Becks production company “The Blaze”) The CIA lady told us if we did not shut up about Libya we would have no life, at that point we went public. We brought back from Libya with us, 2 Gb of proof of the war crimes committed by Clinton and her NATO partners. We have proof that the Libyan war was started by a lie and was a false flag. We also know that Clinton and Obama have been supplying the terrorists in Libya with arms, money and mercenaries since 2011. We stay in touch daily with the tribes of Libya.

Donald Trump has taken another dramatic step to fulfill his promise to the American people.  He did so by announcing yesterday that he will begin securing them by enforcing the nation’s immigration laws.  It is an indictment of the Obama presidency that such a commitment is controversial, to say nothing of shocking.

Mr. Trump will be enforcing a ten-year-old statute by building what he calls a “wall” along the United States’ porous southern border.  He’ll tell border patrol officers to enforce the law by holding, rather than releasing, illegal aliens they apprehend.  And he’ll penalize – not encourage – violation of federal immigration statutes by so-called sanctuary cities.

It is refreshing – and a powerful boost to public safety and national security – that Mr. Trump is actually honoring his oath of office by upholding and defending the Constitution and the laws of the land.

As we always knew, California and American elections are filled with fraud and corruption. Thanks to a new poll, we now know that approximately 13% of illegal aliens vote. Since they are already criminals, stealing ID’s or using phony ID’s. lie to get welfare, steal jobs—why not vote as they to lose. Since they can not be deported or jailed, they have nothing to lose. Obama is protecting these law breakers. Could this be why real citizens don’t vote—the illegal aliens outvote them? Worse, in close elections illegal aliens can make the difference. Corruption? Look at the ballot box. In fact, they could have elected a President and Senator! “Since 80 percent of noncitizens vote Democratic, according to the study, noncitizen participation could have “been large enough to change meaningful election outcomes including Electoral College votes [in North Carolina in 2008], and Congressional elections” such as the 2008 race in Minnesota in which Al Franken was elected to the U.S. Senate, giving “Senate Democrats the pivotal 60th vote” to pass Obamacare. The Old Dominion/George Mason study was sharply attacked by progressive critics, but the mounting evidence makes clear this is a real problem.”

It’s 2009. An election took place. There was a peaceful transition of power. barack obama was inaugurated. A lot of us were unhappy with the outcome of the election but we sucked it up. We did not protest. 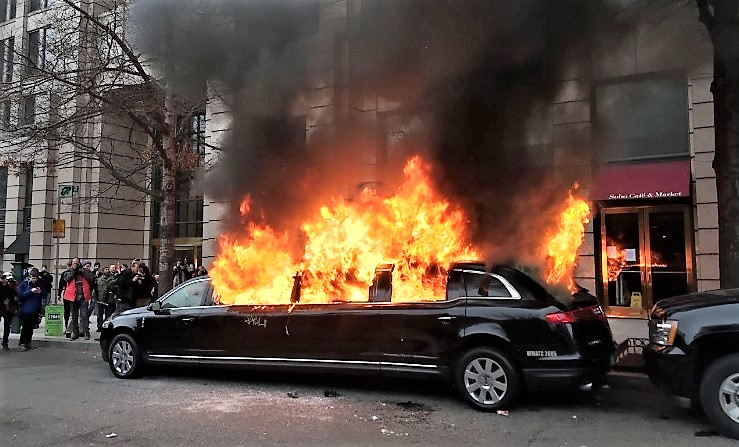 We did not destroy businesses, and there no end to the irony in the vandalizing of a Starbucks.

We did not immediately rip into the President’s kids, as did this SNL writer.

We did not have nervous breakdowns

We did not need inauguration day safe spaces

We did not need juice boxes and Legos

By the way, which democrat denounced the violence taking place in DC and around the country? No one.

Which President called for peace during the transition? I must have missed it.

Now about that irony:

Was he just a prop to be exploited for photo-ops by an uncaring politician owner? Sure looks that way – the “great animal lover” Obama didn’t take Bo with him to Palm Springs, and now the Obamas have jetted off to the Caribbean for x weeks, with not the slightest hint that Obama misses Bo, or even remembers him. There’s not even any suggestion that Bo will move to Chicago with them. Poor dog – Bo is a nice animal, and deserves an owner who actually cares – not just to be kicked to the curb as soon as his “owner” no longer needs him around for photo-ops.