On January 19, 2017, John Forbes Kerry left his job at the State Department. Addressing Foggy Bottomers in the C Street lobby, he ended his speech by declaring, “This is not an end. This is a beginning. It’s a new beginning.” That’s just what departing politicos usually say, but he meant it.

Next January, a report appeared that Kerry had met with a top negotiator for the PLO in London.

The secret back-channel negotiator, Hussein Agha, was a close confidant of terrorist dictator Mahmoud Abbas, the racist PLO boss who around this same time had delivered a speech in which he cursed President Trump, shouting, “May your house be destroyed.” Agha was a frequent collaborator with Robert Malley, who allegedly ran Soros and Obama’s back channel to Hamas. Obama fired Malley during the campaign, but once in office brought him back in a variety of roles including as a lead negotiator on the Iran Deal scam and the National Security Council’s point man for the Middle East. Malley now heads Soros’ International Crisis Group and continues undermining America and defending the Iran Deal.

Kerry urged Agha to tell the PLO boss to “be strong”, “play for time” and “not yield to President Trump’s demands.”

The former Secretary of State suggested that the PLO present its own peace plan that he would push through his contacts in the European Union and Muslim countries.

Kerry also advised the Islamic terror boss to attack Trump personally, instead of the country or administration. And Abbas appeared to have taken his advice. He also assured the Islamic terrorist leader that President Trump wouldn’t be in office a year from now. And that Kerry might run for the job.

END_OF_DOCUMENT_TOKEN_TO_BE_REPLACED 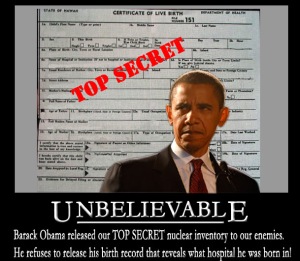 by Dan Crosby
of The Daily Pen

Now that Congress has made the choice to aid and abet Barack Obama
in his theft and corruption of the U.S. Presidency, the legislative branch of
American government, like the Judicial Branch before it, has become the
proverbial, pathetic hustler trying to deny and suppress the truth about Obama’s
identity.

What is congress afraid of? The loss of American sovereignty? No. They could care less about the blood ransom paid to even have a constitution or the sacrifices made for 300 years to call ourselves an independent, sovereign nation. Maybe Congress is afraid of the legislative failure of our Constitutional protections? Nope. They think rights are given by government, not God.

Maybe they wish to avoid hurting Obama’s little feelings at the
expense of our Constitutional?

END_OF_DOCUMENT_TOKEN_TO_BE_REPLACED

Remember when people who talked about a North American Union were publicly marginalized by both conservative and liberal talk show hosts?   Media personalities openly stereotyped people as fools and kooks for merely asking reasonable and sensible questions.  They called people “conspiracy theorists” and nuts even after deals were already made behind our backs – even before the ink on the treaties or contracts dried.

Americans were and are called un-patriotic for asking questions and wanting the simple truth from our government about the backroom deals creating a “North American Union” (NAU). The NAU, of course, is just one component of the global agenda or New World Order that will consolidate power on a global scale. It’s implementation, which has been underway for the better part of the last century, will ultimately destroy American sovereignty.  This agenda has never been so clear as it is now.

END_OF_DOCUMENT_TOKEN_TO_BE_REPLACED

This sounds like Clinton-era word-parsing. The fact is President Obama and Vice President Joe Biden have both praised the new Kenyan constitution, which legalized abortion. Obama told the Kenyan Broadcasting Corporation the pro-abortion document represented a “singular opportunity to put the government of Kenya on a more solid footing.” On another occasion, Joe Biden told a Kenyan audience it would “deepen the roots of your democracy.” Ironically, he added the pro-abortion constitution would also “unleash the energy of the youth.”

Rep. Chris Smith, R-NJ, has detailed how the Obama administration spent at least $23 million funding organizations that supported the new constitution in Kenya. This could be an impeachable offense. Former prosecutor Andy McCarthy has written the advocacy was “borderline criminal (and that’s being generous).”

The State Department is circling the wagons. We thank Rep. Smith for his work so far and hope he will not fold in pursuing the truth.