Venezuelan immigrant and Turning Point USA (TPUSA) student activist Jose Vargas told Breitbart News Daily “there is not a single socialist that is not a liar” adding that they lie to get elected, and that there will be “no other place to live if America falls under [socialist] ideologies.” Vargas, who immigrated to the United States from Venezuela, offered his firsthand experiences with socialism in a Wednesday interview for the weekly TPUSA campus report on SiriusXM’s Breitbart News Daily with host Alex Marlow.

“There is not a single socialist that is not a liar,” said Vargas to Marlow on Wednesday, “and that’s what we have here — that’s pretty much the base of the Democratic Party as of today, they all praise socialism and they say, ‘Oh, no Venezuela was not real socialism.’ No, it was.”

“It’s actually socialism, what happened in Venezuela,” added Vargas, “Don’t let yourself get fooled by them, that’s actually what they want to implement in America — that’s a point of no return, and I would hate to see that happening in the greatest country in the world.”

Vargas, who immigrated to the United States to escape socialism in Venezuela, shared his message in a recent TPUSA video speaking directly to Rep. Alexandria Ocasio-Cortez (D-NY) about the realities of socialism.

President Ronald Reagan fought so hard to push back the socialists both across the globe and here at home. He succeeded in giving us time but now 40 years later time appears to be running out. The war for freedom and against socialism rages on and it’s well past time you choose a side. 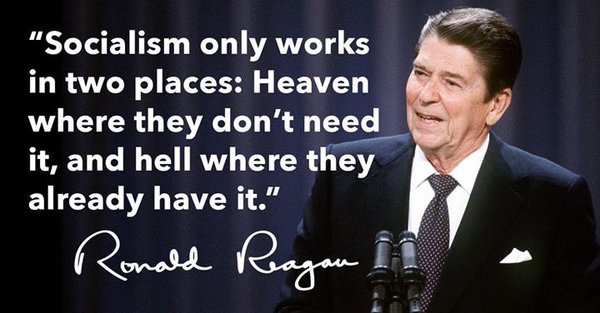 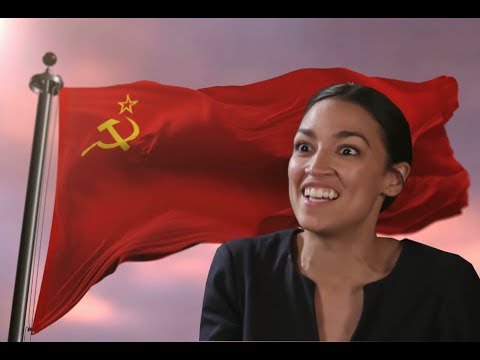 All over the world, nations and leaders are throwing expressions of support and praise for Venezuela’s leaders and people, who after many years of oppression and missteps, have come together with a courageous plan to non-violently shake off a detested socialist dictatorship that has left their country in ruins. Television pictures from yesterday’s demonstration covered the story in spades, showing the magnificent human spectacle to U.S. viewers.

President Trump and Vice President Pence have been right there for them. The Organization of American States and the Inter American Development Bank are loudly supporting them. The European Union is openly encouraging them.

There also are the skunks, such as Russian President Vladimir Putin’s government, an official of which dismissed the millions-strong effort to shake off socialism and finally have food to eat, muggers in jail, a full roll of toilet paper and hospitals with sheets, running water and Band Aids as “an attempted coup.’

Then there are the Democrats, who are curiously, weirdly silent.

END_OF_DOCUMENT_TOKEN_TO_BE_REPLACED

Operation Boot Maduro seems to be moving to stage two.

Following this week’s military mutiny, which was squelched, but not before locals ran out and attempted to defend the troops in pitched street battles, now at least sixty  – sixty! – neighborhoods in Caracas have erupted into riots – big riots, with people reported shot dead. Take a look at the series of tweets posted by Caracas Chronicles on its Twitter feed enumerating the names of the neighborhoods now in open revolt.

10:57 PM – Jan 22, 2019
And to underscore just what this nightmare was about, late last night angry Venezuelans burned the big statue of their late, unlamented strongman, Hugo Chavez, whose socialism – so praised at the time by Bernie Sanders and the Hollywood left — turned their formerly rich country into a wasteland. Someone needs to let Alexandria Ocasio-Cortez know about this vaunted socialism – and where it leads. Watch Chavez go up in flames: 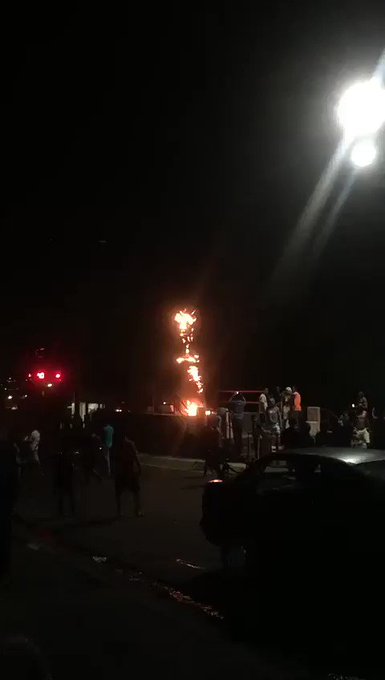 Yesterday, I did a pre-recording of a radio show with the highly recommended Conservative Commandos predicting that Catia and 23 de Enero would blow up (it will air today), and boy, I didn’t know the half of it — those places – and a lot of others – were at the bottom of the dynamite fuse and ready to go.

It’s important also to note that 23 de enero, or, Jan. 23, is an important anniversary in Venezuela – the anniversary of the overthrow of its military dictatorship in 1958. It’s considered an independence day in Venezuela and a whole neighborhood is named after it – one that is right now in open revolt. That is going to supercharge the activity that goes down today, particularly with big demonstrations scheduled.

All eyes remain on whether the soldiers are going to join the angry repressed people, who have no rights whatsoever, not even the right to food or medical care, in that socialist ‘sea of happiness’ as Chavez once called it.

Many think nothing is going to happen, despite that mutiny the other day. But watch this viral video from yesterday showing how soldiers are being treated under their Cuban-led socialist comrade rule. And note this list of incidents from the Associated Press.

That sounds like an open invitation for soldiers to join the revolt.

Naky Soto of Caracas Chronicles observes that Maduro seems to be scared and hiding, and his generals are nowhere to be found:

It’s curious that Nicolás hasn’t come up even in a picture, just as we didn’t see any member of the military high command that’s “willing to die for him.“ There’s been repression but also pot-banging: each tear gas canister multiplies the reasons for this political and social protest. In words of a Cotiza neighbor, who said she’ll protest “today, tomorrow, the next day (…) to kick that bastard out of where he’s holed up, entrenched, fat as a pig and we’re here starving, no way!”.

Florida Sen. Marco Rubio issued a warning of what was going to happen next and his report is believable:

#SEBIN officials in #Venezuela should reconsider the plan they have for tomorrow before it’s too late.

You are about to cross a line & trigger a response that believe me you are not prepared to face.

You still have time to avoid this.

A note of caution: Francisco Toro of Caracas Chronicles writes that maybe this leads to the democracy people want, but warns it also could end badly  – either the regime hangs on and the hellishness continues – or part of the military joins the people rioting in the streets, and part doesn’t, meaning, bloody civil war. He’s right on that, too, and his analysis is worth reading here.

Rubio also tweeted that President Trump is on the case and asked Rubio to cancel a Florida gig last night to meet with him in his office over Venezuela. Obviously, there is a plan, and as Venezuelans fight in the streets for their own freedom, the gears are turning.

While it may seem hard to believe, there was a time when the citizens of Venezuela were allowed to keep and bear arms. This wasn’t the distant past we’re talking about either. It was only in 2012 that the socialist government of Hugo Chavez enacted the “Control of Arms, Munitions and Disarmament Law.” When it was passed, the authors of the legislation pulled no punches, saying that the explicit purpose of the law was to “disarm all citizens.”

That bill was spectacularly successful, massively reducing the volume of privately owned firearms. Then, when the new tyrant, Nicolas Maduro took power and sent his swarms of federal troops and government “militias” out into the streets to crush any opposition to his regime, the unarmed populace had little recourse in the face of government guns. This fact is highlighted by a Venezuelan educator now living in exile in Ecuador. (Fox News, emphasis added)

As Venezuela continues to crumble under the socialist dictatorship of President Nicolas Maduro, some are expressing words of warning – and resentment – against a six-year-old gun control bill that stripped citizens of their weapons.

“Guns would have served as a vital pillar to remaining a free people, or at least able to put up a fight,” Javier Vanegas, 28, a Venezuelan teacher of English now exiled in Ecuador, told Fox News. “The government security forces, at the beginning of this debacle, knew they had no real opposition to their force. Once things were this bad, it was a clear declaration of war against an unarmed population.”

The unarmed population in question probably couldn’t afford to purchase any replacement firearms at this point even if it were legal. Keep in mind that most of Venezuela is so starving and impoverished at this point that families are renting caskets to display at funerals for their deceased loved ones and then burying them in plastic bags.

The effectiveness of the Control of Arms, Munitions and Disarmament Law was regularly highlighted by the government on state-run television. Here are a few of the items they featured.

Any of this sounding familiar to you yet? Government offers of gun “buybacks” (even if it’s in trade for goods)… mandatory gun confiscations… the destruction of weapons rather than having them go back into circulation? In case you don’t feel like clicking through, all of those linked stories in this paragraph come from events here in the United States, not in some foreign ****hole country.

If you’re watching what’s happening under expanding gun control programs in Democrat/socialist run blue states these days, consider the end game. And to do so, look no further than Venezuela. It’s really working out gangbusters for them, isn’t it?

As capitalism recharges our economy, socialists want to destroy the very engine of prosperity.

Once it became apparent that the 2016 election results were real and people came out of their safe spaces to ponder their cruel fate, the attention of the left-wing quickly turned to a certain date: Nov. 6, 2018. They truly believed that would be the day America reacted to the horrible mistake of electing Donald Trump, restoring the Democrat Party to its rightful place as our governing agent. Surely Americans would be chomping at the bit to vote in a “blue wave” to wipe out GOP majorities in the House and Senate and (perhaps literally) handcuff Trump for the last few months of his term.

But a strange thing happened on our way to this meeting with destiny: Trump and congressional Republicans have succeeded in kick-starting an economy that was running in low gear over the previous eight years thanks to a “jobless recovery.” While it’s still possible Democrats will make significant inroads into the GOP advantage, there’s no guarantee that either the House or Senate will flip back to Democrat control.

Meanwhile, a battle begun in 2016 and barely tempered during Hillary Clinton’s campaign now rages for the very soul of the Democrat Party. As evidence, look no further than your local college campus. Chances are you will find this is the age of the democratic socialist.

END_OF_DOCUMENT_TOKEN_TO_BE_REPLACED

The socialists are having a moment. At least if you believe the media

But if the socialists were really having a moment, their big show wouldn’t be a 28-year-old birdbrain whose big achievement was beating a boring white guy in a Hispanic district he didn’t even live in.

If you’re going to take over the Democrats, you need something more to show for it than Alexandria Ocasio-Cortez or a senile socialist who came in number 2 in the primaries and then again in the DNC.

The Democrats are adopting socialist ideas wholesale. The 2020 Dem nominee will run on a guaranteed minimum income or ‘Welfare for All”. Along with free health care, free college and free copies of Das Kapital. And socialism polls brilliantly with the four core Dem bases of angry government workers, angry college students, angry welfare recipients and San Francisco eco-billionaires who keep all their money in Caribbean banks. But that’s because the Democrats have no ideas except hating Trump and Republicans.

END_OF_DOCUMENT_TOKEN_TO_BE_REPLACED

“That pile of cash is the Venezuelan equivalent of one US dollar. Behold the power of socialism.”