Rep. Steve Cohen, D-Tenn., recently introduced a proposed constitutional amendment that would eliminate the Electoral College.  This was obviously done in response to the fact that Hillary Clinton lost the 2016 election despite winning nearly 3 million more votes than President Trump.  According to Cohen, the Electoral College is outdated and distorting.

In a recent Fox News article, Cohen was quoted as saying, “Americans expect and deserve the winner of the popular vote to win office.  More than a century ago, we amended our Constitution to provide for the direct election of U.S. Senators.  It is past time to directly elect our President and Vice President.”

Cohen’s position is clearly partisan, will almost certainly fail, and will face stiff resistance from many smaller states.

According to HistoryCentral, “[t]he Electoral College was created for two reasons.  The first purpose was to create a buffer between population and the selection of a President.  The second as part of the structure of the government that gave extra power to the smaller states.”  The first reason revolved around the possibility that a candidate could manipulate public opinion to such a great extent that it would lead him to secure the presidency.  In other words, the Founders did not believe that the citizens could make the right decision on their own.  Therefore, the electorate served as a system of checks and balances.  This does not appear to be as much of a concern today.

The second reason, however, is still relevant.  Generally speaking, the number of electorates  in a given state directly correlates to the number of congressional representatives in the state.  The minimum number of electorates for a given state is three.  Therefore, the “value” of a vote in a smaller state with a lower population would “count” more than it would in a state with a higher population.  For example, if a state had 90,000 votes and had three electorates, each electorate would represent 30,000 votes.  On the other hand, a large state with 10,000,000 votes and 54 electorates would mean that each electorate would represent approximately 185,000 votes.  Therefore, this system was initially used to appease the smaller states.

Moreover, Cohen’s proposal would likely be rejected by smaller states because it could invalidate the importance of their votes and dissuade people from voting.  It could also allow a small number of densely populated cities to determine the outcome of an election.  According to BrilliantMaps, in the 2016 election, Trump won approximately 2,600 counties to Clinton’s 500, or about 84% of the geographic United States.  Clinton, on the other hand, won 88 of the 100 largest counties (including Washington, D.C.).  Without these, she would have lost by 11.5 million votes.  These numbers are consistent with historical trends.  Many of the densely populated metropolitan areas in states like New York and California tend to vote for Democratic candidates.  This explains why Cohen and other Democrats would push for an amendment to abolish the Electoral College.

While Cohen’s proposal may find support from Democratic colleagues, it is unlikely to succeed.  First, the Electoral College is established in Article II of the Constitution.  Therefore, to abolish or ratify it would require a two-thirds majority in the House and the Senate and three quarters of the states.  Given the potential impact on various states, including smaller ones, this is unlikely.  In addition, there are alternatives to abolishing the Electoral College, such as eliminating the “winner take all” system, which deals with the method of how the states vote for the Electoral College and not with the Electoral College itself.  Finally, if the popular vote decided an election, what would happen if a candidate didn’t win a popular majority (more than 50%) and won only the plurality?  Given the prevalence of third-party candidates, this is quite likely, as was the case with Bill Clinton, who won only a plurality (43%) of the popular vote, and Hillary Clinton, who also won a plurality (48%) of the votes.  Would we then elect our president based on plurality, as opposed to a majority vote?  This could lead to problems down the road.

While the Electoral College is not perfect, it is the most legitimate system.  It is in line with the intent of our forefathers, protects the smaller states, and helps to protect against the possibility that several very densely populated cities will decide the presidential election for the entire nation

Rep. Vern Buchanan, R-Fla., Monday called on the Department of Justice to immediately halt federal funding to the Nation of Islam, after the Washington Examiner first reported that the group has received hundreds of thousands of dollars from the government to teach religious studies programs to prison inmates.

In a letter to the Justice Department obtained by the Washington Examiner, Buchanan called the report “disturbing” and said the government’s funding of the openly anti-Semitic black separatist group was “downright immoral.”

“As you may know, the Anti-Defamation League and the Southern Poverty Law Center have designated the Nation of Islam as a hate group for its racist and anti-Semitic beliefs,” Buchanan wrote in the letter to acting Attorney General Matthew Whitaker.

“The federal government should not use taxpayer dollars to subsidize one of the most infamous hate groups in the United States,” Buchanan added. “That’s why I’m demanding your department immediately cease all contracts with the Nation of Islam and prohibit it from receiving any contracts in the future.” 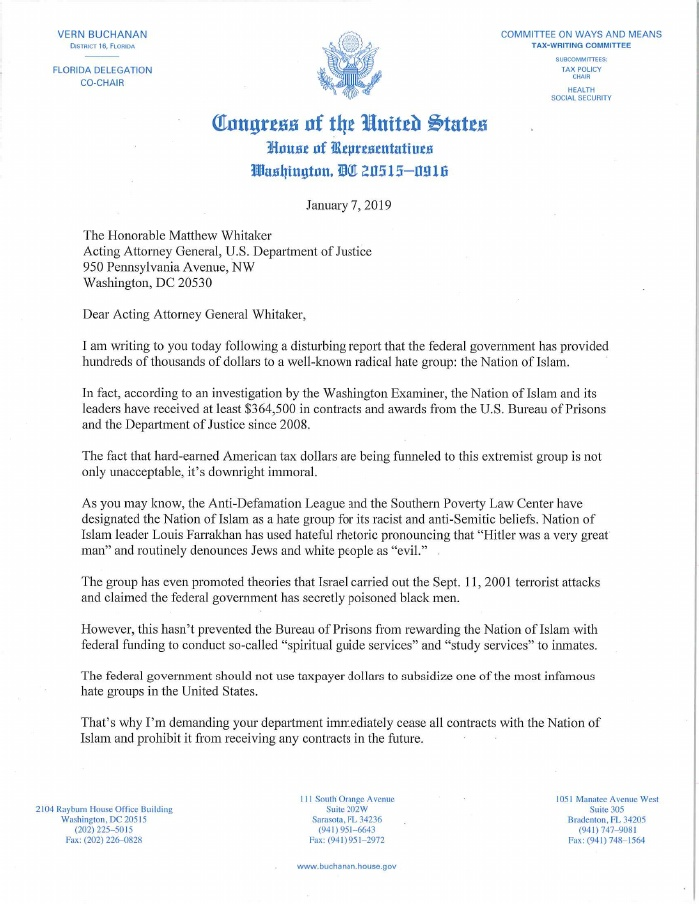 If you’ve been following this story for the past year or so this won’t come as much of a shock. A Venezuela Supreme Court Justice named Christian Tyrone Zerpa has fled the country with his wife and children. Zerpa gave an interview to a news outlet in Florida and said he had remained silent about the legitimacy of the last presidential election out of concern for his family but says he can no longer continue to help President Maduro rule the country. From NPR:

Zerpa met a reporter in Orlando and told the outlet, “I think the president, Nicolás Maduro, does not deserve a second chance because the election he supposedly won was not a free election, was not a competitive election.”…

Zerpa said he did not speak out against the election results months ago out of concerns for his family’s safety.

Maduro’s Socialist Party “gradually but steadily” co-opted the Supreme Court and “turned it into an appendage of the executive branch,” according to the International Commission of Jurists.

There have been a number of opposition leaders who have been threatened or even imprisoned based on manufactured crimes, but Zerpa isn’t one of those. On the contrary, he was selected for the court because of his loyalty to the socialist party and had a close relationship with President Maduro’s wife, Cilia Flores. From EV TV Miami (translation by Google):

In the past he served as deputy for the governing party, PSUV, and thanks to the protection of First Combatant Cilia Flores became one of the so-called “express magistrates” with the commitment to maintain loyalty to the regime.

“They chose me because I was one of the loyal, disciplined members of the United Socialist Party of Venezuela,” the now fugitive from justice told Carla Angola in the interview.

Zerpa revealed that it is Cilia Flores herself, who directs and controls the magistrates, for which she assured that there is no autonomy of powers. He even acknowledged that many of the decisions of the illegitimate TSJ are taken after a “call to Miraflores”.

Miraflores is the Venezuelan presidential palace, i.e. the equivalent of the White House. So what Zerpa is saying is that the country’s Supreme Court is now taking dictation from the First Lady. Venezuela has responded to this defection exactly as you’d expect, by accusing Zerpa of having fled to avoid charges of sexual harassment:

The president of the Supreme Court of Justice, Magistrate Maikel Moreno, pointed out that ex-Judge Christian Tyrone Zerpa was investigated on November 23, 2018, the date on which his file was sent to the Republican Moral Council, as a result of the repeated denunciations officials of his office had filed against him, for unseemly and immoral conduct to the detriment of a group of women who were working in his office, many of whom presented their resignations or had to be relocated to other areas of the institution, before their aberrant conduct, which can only obtain contempt and rejection of society.

Is any of this true? Who knows. What is certain is that the Maduro dictatorship has to come up with some excuse to discredit Zerpa and anything he says about how the government is currently being run.

But it turns out that Magistrate Maikel Moreno, who has been President Maduro’s main enforcer on the court, has a checkered past himself. Last year, Reuters did a lengthy investigation which found he had been arrested for homicide but never charged:

The 51-year-old bodyguard-turned-judge and his court have overruled virtually every major law passed by the opposition-led assembly.

Moreno’s past, however, remains unknown even to most Venezuelans. To trace his ascent, Reuters examined documents and interviewed associates, colleagues and friends of the chief justice in five countries.

The picture that emerges is of a jurist who, by leveraging personal connections and handling politically sensitive cases that other lawyers and judges rejected, endeared himself to Maduro and fellow members of the late Hugo Chavez’s “Bolivarian Revolution.”

In his rise to Venezuela’s top judicial perch, Moreno left behind a past that includes allegations he participated in extortion and influence-peddling rackets and his arrest in 1989 on suspicions of killing a teenager, according to government documents and people familiar with his history.

Reuters found no evidence Moreno was ever tried or convicted of any criminal charges.

Socialism always turns out to be a group of crooks clinging to power while everyone else starves.

Since Watergate, the Washington wisdom has always held that it’s not the crime, it’s the coverup that sinks a politician. But that’s only the case when the coverup fails.

But what if the coverup succeeds?

It’s horribly simple. The crimes are never uncovered and the perpetrators are never brought to justice no matter how serious their crimes may be. That is precisely what has happened because of the FBI and Justice Department’s coverup of their abuses of power and illegal actions during the 2016 election.

In this case, the FBI and the Justice Department have succeeded in the most significant coverup in American political history. The abuses of power and crimes they have succeeded in covering up are not only against the law: they are crimes against our system of law and government. They were perpetrated by employees of the government, under color of law, with the intention of affecting the outcome of an election.