WASHINGTON (AP) — Amid fears of an atomic arms race in the Middle East, a senior United Arab Emirates official has told a top U.S. lawmaker that it too might seek the right to enrich uranium that Iran has asserted under the recently signed nuclear deal.

The landmark Iran accord to curb its nuclear weapons in exchange for economic sanctions relief allows Tehran to enrich uranium. In barely noticed testimony last month, Rep. Ed Royce, R-Calif., chairman of the House Foreign Affairs Committee, said the UAE’s ambassador in Washington, Yousef al-Otaiba, had informed him in a telephone call that the country no longer felt bound by its previous nuclear agreement with the United States.

“He told me, ‘Your worst enemy has achieved this right to enrich. It’s a right to enrich now that your friends are going to want, too, and we won’t be the only country,’” Royce said in a phone interview with The Associated Press this week, elaborating on his testimony. 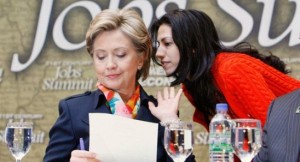 Some weeks ago, I attempted a preliminary analysis of whether Hillary Clinton violated 18 U.S.C. Section 793(f). This provision states:

Now, Fox News reports that “an intelligence source familiar with the [FBI] investigation of Clinton” says the Bureau is focused on whether there were violations of this very provision of the Espionage Act. The intelligence source points out that Section 793(f) says nothing about classified information, but instead is triggered by lawful possession of national defense information when a security clearance holder “through gross negligence,” such as the use of an unsecure computer network, permits the material to be removed or abstracted from its proper, secure location.

That sounds a lot like what Hillary Clinton did.

END_OF_DOCUMENT_TOKEN_TO_BE_REPLACED 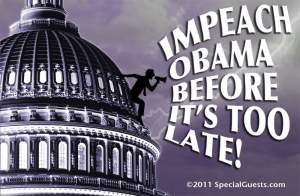 Talk of impeaching President Obama is nothing new. Many of you readers have long argued for it, based on Obama’s myriad and ongoing attempts to “fundamentally transform” – aka, weaken (destroy) this republic. Or his now well-known lies to the American people, such as “if you like your plan, you can keep it.” Or his release of Army deserter Bowe Bergdahl in exchange for the release of five dangerous Taliban members. Or even just the president’s basic failure to uphold our republic’s rule of law – which he took an oath to protect – the Constitution.

But, until now, suggestions of Obama’s impeachment were largely the domain of the American people and their leaders – perhaps even limited to “politically motivated” and/or “racist” Republicans. So the latest suggestion of impeachment is especially startling given its source.