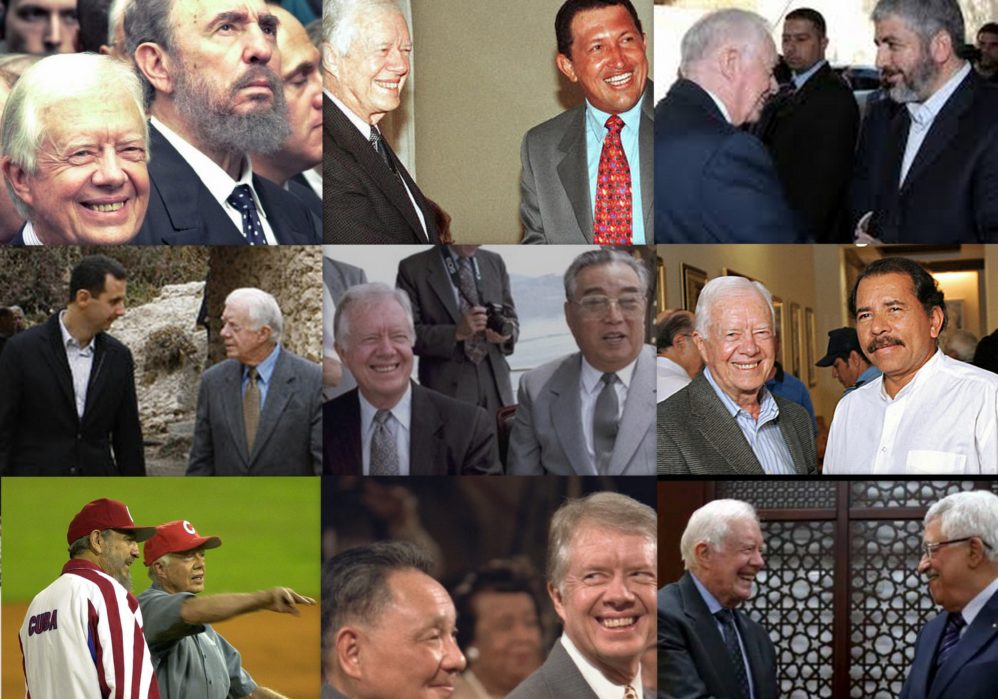 At the age of 95, Jimmy Carter is now the longest-living U.S. president in history. “Great men are a dime a dozen,” MSNBC’s Joe Scarborough noted on the former president’s birthday. “Jimmy Carter has always been something far greater than that. He has lived his life as a good man. And that is exactly what America needs right now.”

Now, I realize the Trump-obsessed Scarborough is attempting to juxtapose the former president with the present one. But the canonization of Carter has always been transparent revisionism. Habitat for Humanity or not, the world would have been a far better place had Carter retired from the world stage after his presidency. Carter’s post-presidency is a stark reminder, in fact, that “good” personal decorum doesn’t necessarily translate into “good” political actions.

“Great men” do not, as Carter has his entire post-presidential life, use freelance diplomacy abroad to undermine elected American governments. They do not coddle and legitimize tyrants and murderers around the world. They do not undercut liberalism by allowing despots to use them as props. It is one thing to meet with detestable characters as president — diplomacy and American interests often dictate it — but it is quite another to ally yourself with them as a free man. Yet, that’s what Carter has done for 40 years.

Carter was the first, and only, ex-president to visit communist Cuba. “I look forward to this opportunity to meet with Cuban people from all walks of life and to talk with President Castro,” Carter claimed. While there, Carter would spin fantasies about Cuba’s “superb systems of health care and universal education,” while offering perfunctory attention to the hundreds of political prisoners who were, as he tossed around a baseball with Castro, being imprisoned and tortured.

Then again, there are few communist strongmen who haven’t sung Carter’s praises. Before the socialist cratering of Venezuela, Carter had been one of Hugo Chavez’s most important international allies. In a speech at the Carter Center, three weeks before Venezuelans voted in 2012, the former president noted that “of the 92 elections that we’ve monitored, I would say the election process in Venezuela is the best in the world.” (You won’t be surprised, I suspect, to learn that the United States was “one of the worst” because it allowed all citizens to spend money on campaigns.)

Numerous international pro-democracy groups disagreed with Carter’s assessment. In Venezuela, Chavez was the only one with access to unlimited funds — not to mention the state’s infrastructure and media — while anyone who opposed him was cowed into silence lest they lose their property and be deported. Carter, like many others these days, forgets there’s a lot more to liberalism than voting.

It must have been a tragic blow to the opposition to have watched a former American president, one endlessly celebrated by liberals in his own country, preemptively endorsing the authority of Chavismo. After a 45-minute chat with Carter, Chavez, just “as Fidel says,” called the former president “a man of honor.”

He wasn’t alone. Nicaragua communist Daniel Ortega, an ally since Carter helped him establish a Sandinista dictatorship in 1979, surely agreed. As did Haitian military martinet Raoul Cedras. As did strongman Joaquin Balaguer, who won another term in the Dominican Republic in 1990 after Carter ignored widespread fraud.

It was Carter, who takes far too much credit for the Camp David Accords, who “monitored” the 2006 Palestinian elections in which Hamas toppled the ruling Fatah in Gaza. Not only did Carter legitimize Hamas’ theocrat rule, he argued the only way toward a genuine peace was recognition of the terror group by the international community.

The Great Man has always had a soft spot for the murders of Israeli citizens. As Douglas Brinkley described it, Carter’s “fondness” for the godfather of modern terrorism, Yasser Arafat, “transcended politics, based on their emotional connection and the shared belief that they were both ordained to be peacemakers by God.”

Yet, not even after Hamas had begun tossing Arafat’s Fatah officials off rooftops and summarily executing them in the streets did Carter change his mind. Even today, as Hamas targets civilians and murders American citizens, Morning Joe’s hero argues that the group deserves “legitimacy as a political actor” because it is “committed” to peace.

The most consequential of Carter’s meddling, though, was his “brokering” of a disastrous deal with North Korea in 1994. Carter actively undercut the Clinton administration’s international efforts to stop the dictatorship from attaining nuclear weapons. The former president, who was not empowered to make any agreements, struck one with Kim Il Sung, and then publicly released it to pressure the administration. Carter would admit as much, explaining, “I hoped that it would consummate a resolution of what I considered to be a very serious crisis.”

Talk about Logan Act violation. One Clinton aide called Carter’s actions “near traitorous.” The mess you see now is, in part, the result of Carter’s handiwork.

So, at worst, Carter is a knowing supporter of bad actors, and at best, a naïve moral relativist. Bruce Klingner argues that the former president “habitually adopts a value-neutral, even-handed treatment of all countries, ignoring the reality that some are belligerents and others are victims.” This seems charitable framing for a man who was once the leader of the world’s most powerful nation. Whatever the case, no modern ex-president has been more destructive to the interests of liberalism.