While broaching the subject in her book about the controversy surrounding her adviser Huma Abedin’s connections to the Muslim Brotherhood, which went mainstream a full year after those connections were discovered by Shoebat.com, Hillary Clinton has inadvertently provided more evidence that Abedin is a stealth agent for the Brotherhood. What may seem like a harmless admission – that Huma traveled to Cairo with Hillary in 2012 – is actually quite a damning revelation considering that Huma (a Muslim) – was married to Anthony Weiner (a Jew) coupled with who was in power in Egypt at the time – the Muslim Brotherhood. 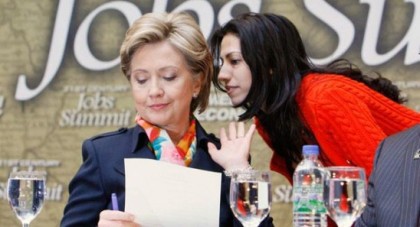 In her book, Hillary reveals some of what happened during a meeting with Coptic Christians while visiting Cairo in 2012, after Mohammed Mursi had been elected President and Egypt was on the brink of civil war.

…one of the more agitated participants brought up an especially outrageous canard. He accused my trusted aide Huma Abedin, who is Muslim, of being a secret agent of the Muslim Brotherhood. This claim had been circulated by some unusually irresponsible and demagogic right-wing political and media personalities in the United States, including members of Congress, and now it had turned up in Cairo. I wasn’t going to let that stand and told him in no uncertain terms how wrong he was. After a few minutes of conversation the embarrassed accuser apologized and asked why a member of the U.S. Congress would make such an assertion if it wasn’t true. I laughed and said that unfortunately plenty of falsehoods are circulated in Congress. After the meeting Huma went right up to the man, politely introduced herself, and offered to answer any questions he had. It was a characteristically gracious move on her part.

Why did Abedin – a devout Muslim who is married to a Jew in Weiner – join Hillary Clinton on a trip to Egypt when that country was ruled by the extremely fundamentalist Muslim Brotherhood and President Mursi? Did the secret service object? Did Mursi?

That Abedin was with Clinton during that visit received scant media attention at best. According to a Daily Beast report from a year later, it was Abedin who pushed for Clinton to make the trip.

Why would a Muslim woman married to a Jew push for to visit a country run by the extremely fundamentalist Muslim Brotherhood???

As was the case all throughout the summer of 2012, extremely legitimate questions were never answered, like how Abedin ever received a security clearance when her family members have irrefutable links to the Muslim Brotherhood. This is not a matter of guilt by association; it has always been about conflict of interest. In her book, Hillary does not relay any of the questions asked by the “agitated participant” or any of Huma’s responses to them.
Read more at http://freedomoutpost.com/2014/07/hillary-clintons-new-book-provides-evidence-huma-abedin-stealth-muslim-brotherhood-agent/#7LjcVSFYAqRLhpIr.99