It is difficult to write satire in a political-media environment that is delusional and corrupt. Satire is a comparative art, where, ultimately, truth is the basis of that comparison. When everything is a lie and reality is absurd, the similes and metaphors of satire lose their impact.

Conservative movement leaders have published a Citizen’s Mandate, which outlines initiatives they want Republicans in Congress to take in order to “stop” Barack Obama’s “fundamental transformation of America,” something they say the American people made clear in the 2014 midterm elections with such decisive GOP victories.

According to Breitbart’s Matthew Boyle, the major bullet points that the conservative leaders say the citizenry expects of Republicans include: an end to Obama’s “promised ‘Fundamental Transformation’ of the country,” a stop to overreaches by the executive branch, a restoration of “Constitutional balance of power among the three branches of government,” for Republicans to “bring an end to the perennially unpopular Affordable Care Act,”  to stop “the President’s Executive Amnesty initiatives,” while holding “the Executive branch accountable for its myriad abuses of power and its national security failures both foreign and domestic” and a new beginning that puts “the interests of the United States of America first among nations.”

They are all sensible and laudable goals, yet they do not address the essence of the problem.

It is a little like whistling past the graveyard, recommending half measures to instill faint optimism in the face of a dire situation; dilute penicillin for a political-media culture mortally infected by lies and corruption.

END_OF_DOCUMENT_TOKEN_TO_BE_REPLACED

Barack Obama is the spawn of 60s radicals like Stanley Ann Dunham, Frank Marshall Davis, and Bill Ayers. Among the favorite slogans of this set was “Bring the war home.” A generation later, they may finally succeed. 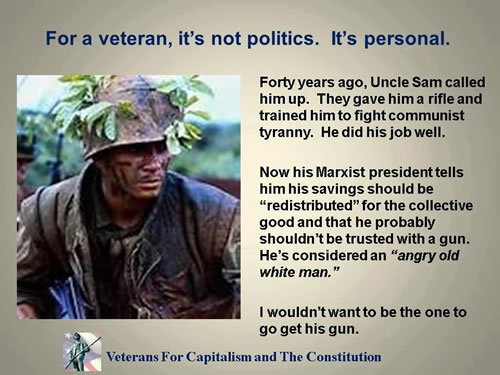 Despite our political and philosophical differences, one of the most touching and humanizing aspects of Barack Obama was his mother’s tragic death of uterine and ovarian cancer in 1995. Obama frequently stated his self-employed mother spent her last days frantic, desperately trying to assure the insurance industry would not deny her coverage, instead of resting and preparing to meet her Maker (Whom she apparently did not believe in). As it turns out, the entire story was, at best, greatly exaggerated and at worst calculated fabrication. Unlike so many of the president’s scandals, this lie has been reported not simply in conservative outlets like The Washington Examiner and The Blaze but in major Establishment media sources like Politico, and the New York Times.

END_OF_DOCUMENT_TOKEN_TO_BE_REPLACED

Something is wrong with Barack Obama.  We all know it.  We all see it.  When he speaks about America, Americans cringe.  There is a strangeness to his manner, an unease when he talks about America.  He appears awkward and uncomfortable.  His speech seems performed and practiced yet, oddly halting.  It’s reminiscent of American POW’s in Vietnam or Iraq reading a forced confession.  His eyes, expressions, and vocal tone are disconnected from his words.  The words themselves often sound American, but the delivery is clinical and detached.  His attempts at patriotic sentiment ring hollow and phony.  “Once again, with feeling!” is how Americans are left feeling.  He just doesn’t seem right.  He doesn’t seem like, well…one of us.

END_OF_DOCUMENT_TOKEN_TO_BE_REPLACED

In Part I of this WMR special report, we revealed the connections between Barack Obama, Sr. and the CIA-affiliated Airlift Africa project to provide college degrees to and gain influence over a group of 280 eastern and southern African students from soon-to-be independent African nations to counter similar programs established by the Soviet Union and China. Barack Obama Sr. was the first African student to attend the University of Hawaii. Obama Sr. and Obama’s mother Stanley Ann Dunham met in a Russian language class in 1959 and they married in 1961.

The African airlift program was administered by Kenyan nationalist leader Tom Mboya, a fellow Luo tribe mentor and friend of the senior Obama. According to CIA documents described in Part I, Mboya also served the CIA in ensuring that pro-Soviet and pro-Chinese African nationalists were stymied in their attempt to dominate pan-African nationalist political, student, and labor movements.

One of Mboya’s chief opponents was Ghana’s first president, Kwame Nkrumah, who was ousted in a CIA-inspired coup in 1966, one year before to Obama Sr’s son, Barack Obama, Jr. and his mother joined Lolo Soetoro, an Indonesian who Obama’s mother met at the University of Hawaii in 1965, when President Obama was four years old.

END_OF_DOCUMENT_TOKEN_TO_BE_REPLACED

Last week, in response to a Freedom of Information Act request, the State Department released passport records of Stanley Ann Dunham, President Obama’s mother – but those records for the years surrounding Obama’s 1961 birth are missing.

The State Department claims that a 1980s General Services Administration directive had resulted in the destruction of many passport applications and other “non-vital” passport records, including Dunham’s 1965 passport application and any other passports she may have applied for or held prior to 1965.

END_OF_DOCUMENT_TOKEN_TO_BE_REPLACED

CLAIMED TO AP THAT HIS FATHER ATTENDED OXFORD AND THAT HE HIMSELF WAS RAISED IN KANSAS!

Obama has a reputation that cannot be denied.

(Feb. 19, 2010) — The Post & Email has received from a private citizen-researcher PDF copies of AP News Stories which paint a picture of Obama  which we know today is false.

These additional AP reports corroborate the allegations that the AP in 2004 claimed Obama was born in Kenya.  (See our past coverage of this aspect of the story).  They do this because they confirm that the AP was willing to say anything about Obama so that readers would feel connected to him.

In an unsigned AP report entitled “Harvard Student Tackles Racism at its Core,” which appeared on page 2, section 3, of the Chicago Herald, May 3, 1990 edition, we learn that Obama moved to Indonesia when he was two years old, contrary to the established facts that he did so in 1965, after his alleged mother, Stanley Ann Dunham, married Lolo Soetoro, an Indonesian national, who had been a student at the University of Hawaii.