All contracts between the California Legislature and former U.S. Attorney General Eric Holder Jr. or Covington and Burling.

On January 4, 2017, California legislative leaders announced that they have hired Holder to assist them in anticipated federal challenges to several state policies such as climate change and immigration.

In a statement, Kevin de Leon, California Senate President Pro Tempore said, “With the upcoming change in administrations, we expect that there will be extraordinary challenges for California in the uncertain times ahead.”  The California Attorney General, who represents the State’s interest in court, already has a budget of $190 million.

END_OF_DOCUMENT_TOKEN_TO_BE_REPLACED

Just some Mexican guys out for a walk in the desert.

When a jury gathers next week for the trial of two men charged with the murder of a U.S. federal agent, it will not hear any details of how two guns found at the murder scene were part of a U.S. government-sanctioned weapon program, a federal judge has ruled.

Friday morning, U.S. District Court Judge David Bury agreed with U.S. prosecutors to keep the details of Operation Fast and Furious out of the upcoming trial for the murder of U.S. Border Patrol agent Brian Terry.

Terry was killed in a firefight with a crew of armed Mexican men who were scouting the desert in search of drug smugglers to rob. Two AK-47 variants were found at the crime scene. Those rifles were purchased in a gun-tracking operation overseen by the Bureau of Alcohol, Tobacco, Firearms and Explosives, Operation Fast and Furious. ATF officials had hoped weapons purchased at a Glendale gun store would eventually turn up in the hands of high-level Mexican drug traffickers. Instead, ATF lost track of more than 1,400 guns. The two found at Terry’s death were part of the operation, congressional investigators later found.

The U.S. asked the judge this summer to keep the details of Fast and Furious out of the murder trial, stating it was irrelevant.

Bury agreed. “I agree with one exception. I can’t find any relevance expect if the government should open the door,” he said.

If the government brings up the origins of the guns found, Bury ruled that defendants can then bring up Fast and Furious.

Bury ordered the defendants “not to refer to … or elicit any testimony regarding Operation Fast and Furious. Understood?”

(Washington, DC) – Judicial Watch announced today that it has obtained graphic crime scene photos taken at the site of a 2013 gang-style assault on a Phoenix, AZ, apartment building, including a close-up photo revealing the serial number of the AK-47 rifle used by the assailants.  As a result of Judicial Watch’s October 2, 2014, public records lawsuit, the weapon has been already traced to the Obama Department of Justice (DOJ) Operation Fast and Furious gunrunning program.  The photos were also produced by the Phoenix Police Department in response to this lawsuit (Judicial Watch v. City of Phoenix (No. CV2014- 012018)). Full batch of photos can be viewed here. 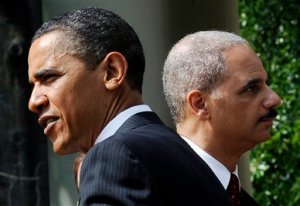 According to press reports at the time of the assault, police investigating the shooting that left two wounded found an AK-47 assault rifle in the front passenger area of a vehicle that had crashed into a fence surrounding the apartment complex. Inside sources informed Judicial Watch at the time of the crime scene investigation that the AK-47 used in the assault had been provided to the assailants as part of the Obama-Holder Fast and Furious program. On October 16, 2014, Judicial Watch announced that, based upon information uncovered through its October 2 public records lawsuit, the U.S. Congress had confirmed that the rifle was tied to the Fast and Furious operation.  Attorney General Eric Holder has already admitted that guns from the Fast and Furious scandal are expected to be used in criminal activity on both sides of the U.S.-Mexico border for years to come.

END_OF_DOCUMENT_TOKEN_TO_BE_REPLACED

In just a matter of days, the Justice Department will finally turn over critical information contained in withheld documents relating to the scandalous Operation Fast and Furious, an ATF gun-walking sting that allowed numerous firearms to be illegally transferred to Mexican drug cartels. 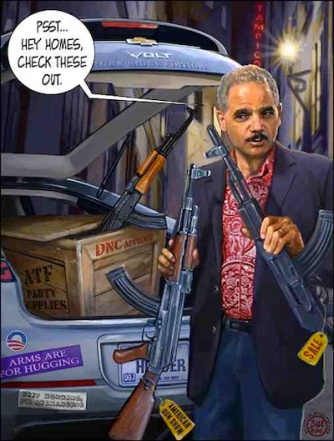 The guns have been linked to hundreds of murders in Mexico, along with the murder of Border Patrol agent Brian Terry.

The release of these documents has taken on a new urgency, as evidence has recently turned up proving that guns involved in Fast and Furious are still be used to commit crimes.

END_OF_DOCUMENT_TOKEN_TO_BE_REPLACED

“I was singled out for punishment even though all my sales to these people were reported as required by law, and the buyers were legally able to buy the firearms,” Garland said. “The ex-police chief, Angelo Vega, the ex-mayor, Eddie Espinoza, and Blas Gutierrez, the village trustee, and everyone else who bought from me, need to be interviewed. They all asked, on the record, ‘Why is Ian here, he had no conspiracy with us? We only used his store, as well as others, to buy from.’ The connection between Arizona’s Fast and Furious is clear, crystal clear, and this is in my pre-sentencing report.”

“I am Australian born, a U.S. citizen, and damn proud of it,” Garland said. “I am fighting because the government’s lawyers held back information that could have exonerated me. Plus, I got sentenced under the wrong guidelines, which gave me a harsher penalty than even the charges warranted.”

According to the El Paso Times, Garland is planning on sharing the information he has regarding the ties of Fast and Furious to El Paso and Nuarez with Mexican authorities.

The Obama administration has a lot of blood on its hands and Congress just does not seem willing to hold anyone in the administration accountable. Hundreds of Mexicans are dead, including a Mexican beauty queen and a Mexican police chief. At least two federal agents are dead. All of these people have died from gunshot wounds from weapons obtained via Operation Fast and Furious.

While much of the news of late on Freedom Outpost has centered on the Bundy Ranch Siege, numerous references have been made to the similarities of Ruby Ridge and Waco. Yet, the biggest missing agency in the Bundy saga is the Bureau of Alcohol, Tobacco, Firearms and Explosives (BATFE). They are, however, at the center of the Fast and Furious scandal. This illegal federal agency also has blood on its hands. It proceeded as if everything was OK, watched the guns walk across the border, and when the whistle was blown on the operation, sought to discredit the whistleblowers, even threatening them.

Eric Holder has been continuing in his capacity as Attorney General for nearly two years since being held in contempt of Congress. Obama continues to hold executive privilege over releasing documents subpoenaed by Congress regarding Fast and Furious. Now, these same guns are coming back across our borders.

I’m fully 100% pro-gun. I don’t think the federal government has any authority when it comes to restricting arms of any type from its people. However, we know what this administration’s goal is. Holder has told us it is to brainwash us against guns. Obama has told us he supports the Second Amendment with his lips, but his pen, policies and actions have demonstrated he is a domestic enemy of the Constitution. The only ones Obama supports having guns are America’s enemies, and he has happily provided them with arms (along with the approval of Congress), that will eventually be used against Americans.

Remember the mountain of lies we have heard from the Obama administration, specifically Attorney General Eric Holder, regarding Operation Fast and Furious? The claim was that they were just doing as the Bush administration in Operation Wide Receiver. In both accounts, I personally don’t agree with the method, but at least to the Bush administration’s credit they did actually attempt to track the weapons. The Obama administration made no such effort. In fact, it has been claimed by a high-ranking Mexican drug cartel operative that the Obama administration was knowingly arming the Sinaloa Cartel against rival cartels with these weapons. As a result, the weapons have only been able to be recovered at murder scenes for the most part. Court documents have provided a little more detail on the conspiracy between the cartels and the Columbus, New Mexico conspirators in Operation Fast and Furious.

According to the El Paso Times:

END_OF_DOCUMENT_TOKEN_TO_BE_REPLACED

We are still waiting for documents in the case because Holder has refused to turn them over and Obama has claimed executive privilege (which he can only claim for White House involvement).

Over the weekend several big stories regarding the Operation Fast and Furious  gunrunning scandal developed.  For the sake of brevity, I’ll make several posts  with each of the stories.  First, on Friday evening the lawsuit  filed by the family of slain Border Patrol agent Brian Terry was dismissed.

The family had argued “ATF’s (Bureau of Alcohol, Tobacco, and Firearms)  failures were not only negligent, but in violation of ATF’s own policies and  procedures,” which led to their son’s death from a weapon obtained from  Fast and Furious.

END_OF_DOCUMENT_TOKEN_TO_BE_REPLACED

Hmm..don’t suppose they could be hiding anything, do you?

Attorney General Eric Holder and his Department of Justice have asked a federal court to indefinitely delay a lawsuit brought by the watchdog group Judicial Watch. The lawsuit seeks the enforcement of open records requests relating to Operation Fast and Furious, as required by law.

Judicial Watch had filed, on June 22, 2012, a Freedom of Information Act (FOIA) request seeking all documents relating to Operation Fast and Furious and “specifically [a]ll records subject to the claim of executive privilege invoked by President Barack Obama on or about June 20, 2012.”

The administration has refused to comply with Judicial Watch’s FOIA request, and in mid-September the group filed a lawsuit challenging Holder’s denial. That lawsuit remains ongoing but within the past week President Barack Obama’s administration filed what’s called a “motion to stay” the suit. Such a motion is something that, if granted, would delay the lawsuit indefinitely.

(CBS News) — Another weapon from the federal Bureau of Alcohol, Tobacco, Firearms and Explosives agency’s controversial Operation Fast and Furious was recently recovered at a Mexican crime scene, CBS News has learned. Congressional investigators say the crime scene was likely where a recent shootout took place between reported Sinaloa drug cartel members and the Mexican military, in which Sinaloa beauty queen Maria Susana Flores Gamez and four others were killed.