(Telegraph) — An al-Qaeda militant has been killed together with his two children when a car bomb he was making at his home exploded near the northern Iraq city of Kirkuk, police said. 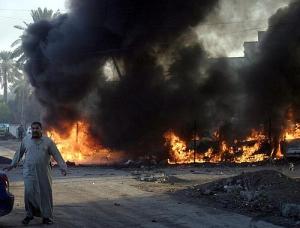 “An al-Qaeda terrorist, Mohammed Nussayef Jasim al-Hamdani, was killed while trying to fit a bomb inside a vehicle at his home,” a police official in Kirkuk said today.

END_OF_DOCUMENT_TOKEN_TO_BE_REPLACED

In one of the most memorable moments of the memorial last night in Tucson, Barack Obama told the audience that Rep. Gabrielle Giffords had opened her eyes for the first time on Wednesday night.
It was very emotional moment:

But, unfortunately it was not true.
The Sonoran Chronicle reported that Rep. Giffords could open her eyes on Sunday.
(The Sonoron has since pulled the article.)

The bullet “traveled the entire length of the brain on the left side,” said Dr. Rhee, Chief Trauma Surgeon at the University Medical Center, at a press conference on Sunday. In terms of being shot in the head, this is “about as good as it’s going to get,” said Rhee.

Giffords can open her eyes, but because she is on a ventilator she can’t speak, said Rhee.

Rhee attributed Giffords’ surviving the gunshot wound to a variety of factors, including a fast response by paramedics, proper care by the hospital staff, and luck. The bullet did not cross from one hemisphere of the brain to the other, nor did it go through the geometric center of the brain.

Would someone please tell me this was not planned.

More… The Tucson Sentinel also reported that Gabby could open her eyes in their Tuesday article.