The New York Police Department is working to recruit more Muslims, and is asking for help within the community to better refine outreach aimed at stifling the lure of overseas terror groups, officials said Monday.

Right now, there are about 800 Muslim uniformed police officers out of about 35,000, according to the NYPD Muslim Officers Society. Of those, only about 20 are higher ranked officials. Lt. Adeel Rana, commanding officer of the community affairs immigration outreach unit, said there has been a slow increase over the past decade, but it has been rapidly changing in the past year and a half.

“It’s changing every day; we are getting more and more recruits,” he said. “And as they see people of their own religion in uniform, their eyes brighten.”

There has been an effort to increase openness and communication with the community since the new administration took over, stinging from a public outcry over the contentious stop, question and frisk policy and the surveillance of Muslims. A unit that investigated Muslims under the previous police commissioner was disbanded, and Commissioner William Bratton said Monday officials had worked hard to regain trust.

Ex-NYPD Commissioner Kerik is right… De Blasio and Sharpton Have ‘Blood on Their Hands.’ They brought this on and they share responsibility for the deaths of these two officers. Last Saturday, two NYPD officers were assaulted by seven protesters who punched and kicked them. Now this. What did the race baiters expect? They begged for this to happen – they incited riots and violence and now two good men are dead. They were working overtime as part of an anti-terrorism drill in Bedford-Stuyvesant. Very dark irony at play.

Ismaaiyl Brinsley, a gang banger, nonchalantly walked up to the patrol car, pulled a gun and shot the officers. His Instagram page bragged about committing this atrocity 48 hours before he did the deed. First he shot his girlfriend in Baltimore… then he drove to New York and murdered two officers and then committed suicide in a subway station. This was an execution plain and simple and Brinsley said he did it in revenge for Eric Garner and Michael Brown. Both killed by cops in the line of duty and both grand juries found the officers innocent. But because of ginned up racial unrest by the likes of Al Sharpton and Mayor De Blasio, thugs are taking their own form of justice in the streets. Well done, you grandstanding, evil idiots.

De Blasio is on the air as I write this. I can’t stomach watching the hypocrite. Officers Wenjian Liu and Rafael Ramos will miss Christmas with their grieving families this year. Meanwhile, De Blasio poses for the cameras and tries to look sad. I call bull crap. He threw all of the NYPD under the bus over the Garner incident. They weren’t innocent till proven guilty – they were ruled innocent and declared guilty by their own Marxist Mayor.

END_OF_DOCUMENT_TOKEN_TO_BE_REPLACED

First of all let me send out my best wishes to the two NYPD rookie officers who were attacked by an Islamic jihadist in Jamaica Queens yesterday. As of the time I am writing this, there has been no word about the further condition of the two officers one of which suffered a wound to the arm, the other a head wound and was in critical condition. The hatchet-wielding assailant whose Facebook page clearly conveyed his intent was shot dead by two other NYPD officers. We must stop the insidious practice of cultural jihadist apologizing and dismissal.

As reported by The Blaze, “The deceased suspect has been identified in multiple reports as 32-year-old Zale Thompson, an apparent Muslim who lived in Queens. At a news conference at a hospital where one officer was being treated for a serious head wound, Police Commissioner William Bratton said that investigators were still trying to determine a motive.”

However, a perusal of Thompson’s Facebook page clearly provides insight into a motive – a motive no different from that of Alton Nolen who beheaded a 54-year-old co-worker in Moore, Oklahoma. A motive no different from the two Islamic jihadists in Canada; one who used his car to run over two Canadian Soldiers the other who shot a Canadian Soldier in the back of the head. Thankfully all of these jihadists were killed, save for Nolen in Oklahoma. This is not “workplace violence.” This is not a case of mental illness. This is Islamic jihad coming to our streets.

These individuals are responding to a call for such savagery based on the violent ideology of Islam – no more of this cutesy talk about being radicalized. It is indeed the theocratic-political totalitarian imperialist ideology of the warlord Mohammad they are following – no perversion, as it is written in the Koran and Hadiths. We are simply reticent to admit exactly what this is because it does not make us comfortable. We’re faced with reality and proof positive, yet we strain to refer to this in every possible manner except for what it is – well at least, some do.

END_OF_DOCUMENT_TOKEN_TO_BE_REPLACED

And Muslims wonder why they are viewed with skepticism by the majority of Americans. 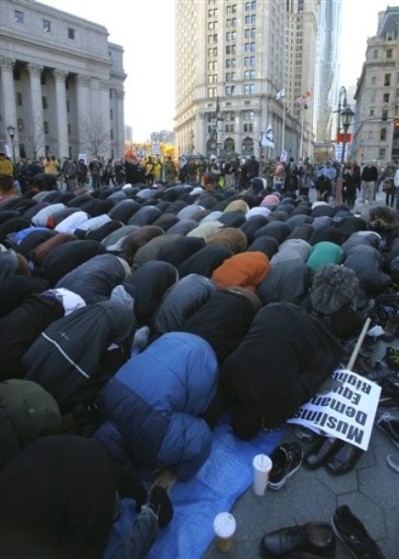 NEW YORK (AP) — Hundreds of Muslims prayed in lower Manhattan and planned a march on New York Police headquarters Friday to protest a decade of NYPD spying inside Muslim neighborhoods.

“Had this been happening to any other religious group, all of America would be outraged,” said Daoud Ibraheem, 73, a retired graphic artist from Brooklyn.

Many of these programs were built with the help of the CIA as part of an unusually close collaboration that is now the subject of an internal CIA investigation.

“There’s a wrong that we have all been made aware of,” said Abdur-Rashid, of the Mosque of Islamic Brotherhood.

He said it was no secret that police have been watching mosques. But the news that the NYPD was monitoring everything from Islamic schools to restaurants was unacceptable.

The protest was joined by about 50 members of the Occupy Wall Street movement, who marched to Foley Square chanting “Surveillance is violence, we won’t remain silent!”