It would have made for quite a convenient “accident” for Democrat politicians increasingly desperate to allow more illegal votes to sway upcoming elections. It also provides yet more proof for those who have long feared widespread corruption within the U.S. election system that almost always seems to favor the far-left Democrat Party cause. 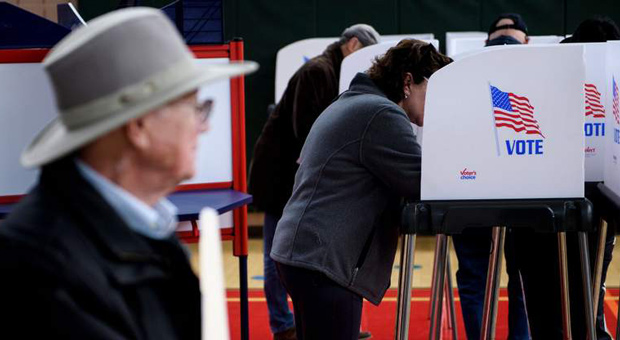 A typo in the state’s automatic voter registration bill would have forced non-citizens to register despite their ineligibility — but lawmakers vowed it would be fixed.

The bill directs designated state agencies such as the Department of Motor Vehicles, State Board of Elections and Department of Social Services to automatically enroll residents who fill out any paperwork with their agencies.

An “opt-out” box would let people choose not to enroll. But sloppily written instructions specifically directed ineligible non-citizens to not check the box.

The instructions were actually supposed to tell them to check the box so they wouldn’t inadvertently be registered.

“There is a drafting error which [the Democratic] majority has recognized will be fixed in a chapter amendment,” Assembly Democrats wrote in a memo obtained by The Post.

A “chapter amendment” means lawmakers will pass the bill as-is and then edit the language after the fact.

This “accident” would have provided illegals with clear legal cover to greatly impact upcoming election outcomes.

Does anyone honestly think that if non-citizens overwhelmingly voted Republican such an “accident” would ever occur?

Don’t forget the following information provided by this 2017 report:

Did Votes By Noncitizens Cost Trump The 2016 Popular Vote? Sure Looks That Way

…Now comes a new study by Just Facts, a libertarian/conservative think tank, that used data from a large Harvard/You.Gov study that every two years samples tens of thousands of voters, including some who admit they are noncitizens and thus can’t vote legally.

In 2016, the U.S. Census Bureau estimates that there were 21.0 million adult noncitizens in the U.S., up from 19.4 million in 2008. It is therefore highly likely that millions of noncitizens cast votes in 2016.

And it was no accident. Democrats had extensive get-out-the-vote campaigns in areas heavily populated by illegal aliens. As far back as 2008, Obama made sure that those who wanted to vote knew it was safe, announcing that election records would not be cross-checked with immigration databases.

And last year, the Obama White House supported a court injunction that kept Kansas, Alabama and Georgia from requiring proof of citizenship to register to vote. The message was sent, loud and clear: If you’re a noncitizen or here illegally, don’t be afraid. You’re free to vote. No one will stop you.

Even Democrats should find this troubling; every vote cast by a noncitizen voter negates the vote of a citizen voter. It’s that simple. It’s time the Democratic Party started living up to its name and stop encouraging noncitizens and illegal aliens to vote in our election.

Not like it’s going to change anything in D.C.

While many critics skewer President Obama’s recent amnesty-granting executive action, D.C.’s municipal lawmakers have their own plans for the next battle on the immigration-citizenship front. Invoking considerations of fairness and justice against “anti-immigrant hysteria,” D.C. council member David Grosso (I-At-Large) and several fellow council members on Tuesday introduced the Local Resident Voting Rights Amendment Act of 2015, a bill to grant non-American citizens residing in the D.C.-area the ability to vote in municipal elections.

In keeping with similar initiatives in 2013 and 2004, the bill would give suffrage to non-citizen D.C. residents who “have permanent residency status.” Grosso cited U.S. Census Bureau figures from 2012 approximating that over 90 percent of the 53,975 foreign-born, non-naturalized U.S. citizens in the District are 18 years of age or older, to weight down with seriousness his pronouncement that “these are taxpayers who should have the opportunity to have their voices heard in local elections.”

If the bill passes, it would not make D.C. the first to have allowed non-citizens to vote in local elections. Currently, half a dozen towns or jurisdictions in Maryland, including Takoma Park, allow the practice, while Chicago allows all (presumably legal) residents to vote in school board elections. In much the same vein, non-citizens in California now have the right to act as poll monitors, to practice law (even if an illegal alien), and also to serve on juries.

A massive study published in the journal of Electoral Studies suggests that hundreds of thousands of “non-citizens” have cast votes in recent elections illegally. In fact, the data suggests that these illegal votes have been the difference in several contests.