The latest news indicates that the British-born citizen of Libyan extraction who committed terrorist bombing in Manchester this week had ties to Islamists in his parent’s home country.

Now you remember who is responsible for the situation in Libya, don’t you?

In Libya, meanwhile, an official said counterterrorism authorities have arrested at least two members of the family of the bomber, Salman Abedi, including a younger brother suspected of planning an attack in Libya’s main city, Tripoli.

Dagdoug said Hashem was also in frequent contact with his brother Salman in Manchester and was aware of the plans to attack the concert.

It was unclear whether Abedi’s family were a key part of the network planning the Manchester attack, but authorities were increasingly exploring the emerging connections between Britain and Libya.

Muammar Qaddafi was a brutal dictator. But at the moment in 2011 when Barack Obama and his incompetent Secretary of State, Hillary Clinton, decided to remove him from power, he wasn’t bothering the United States. In fact, he was acting pretty friendly and had given up his nuclear weapons program, and he was obviously keeping a lid on Islamic extremism within his own country.

President Trump, of course, is getting attacked for being too friendly with Middle East satraps and failing to fully harangue them about their human rights records. But Trump has the right idea. This is a barbaric corner of the world, and only nasty operators can keep the savagery at bay and from becoming organized in a way that it comes to get us.

Believe it or not, this might be the least delusional part of Hillary Clinton’s remarks about Libya in last night’s MSNBC town hall forum. Hillary declares that the US-led NATO intervention against Moammar Qaddafi was a success, and that “we didn’t lose a single person” in the regime change … which is only true if one believes that the sacking of our consulate in Benghazi under her watch was entirely unrelated to decapitating the functioning government of Libya (via Shoshana Weissmann):

Politico also picked up the story:

“Libya was a different kind of calculation. And we didn’t lose a single person. We didn’t have a problem in supporting our European and Arab allies in working with NATO,” the former secretary of state said during an MSNBC town hall on Monday night.

Clinton may have been referring strictly to the U.S.-backed overthrow of Libyan dictator Muammar Qaddafi in 2011, which indeed saw no loss of American lives and cost just around $1 billion. But her comments ignore the 2012 attacks at the U.S. mission and CIA outpost in Benghazi, which killed four people including U.S. Ambassador J. Christopher Stevens.

Ousting Qaddafi was worth it, Clinton said.

“Now, is Libya perfect? It isn’t. But did they have two elections that were free and fair where they voted for moderates. Yes, they did. So you know, changing from a dictator who has hollowed out your country to something resembling a functioning state and even hopefully more of a democratic one doesn’t happen overnight,” she said. “And we’ve got to continue to support the Libyan people, to give them a chance, because otherwise you see what has happened in Syria, with the consequences of millions of people flooding out of Syria, with more than 250,000 people killed, with terrorist groups like ISIS taking up almost — huge blocks of territory, as big as some of the states in that area.”

Yes, they certainly do ignore the deaths of four Americans in Benghazi. But these remarks ignore a lot more than that. Qaddafi’s Libya was a brutal dictatorship, but one that had been cooperating in some part against radical Islamist terrorist groups, and had a functioning military that kept them on the run. Decapitating the regime without any way to influence developments on the ground did not result in “a functioning state.” It resulted in a failed state. The government that held two elections cannot even claim all of Tripoli as under its control, and its writ runs nowhere else in the country. 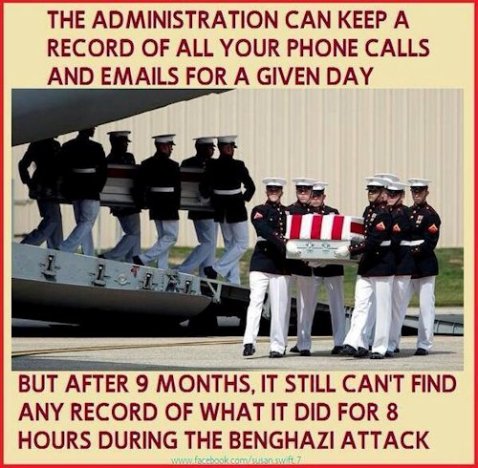 Most stunning of all, Clinton seems unaware that ISIS is taking up blocs of territory in Libya now, too.  So have al-Qaeda affiliates like Ansar al-Sharia — the group that sacked our Benghazi consulate nearly four years ago, thanks in large part to security decisions made by State under Hillary’s leadership. We didn’t give Libya a chance — we destroyed Libya, and left nothing but a viper pit of terror networks to replace it. And Hillary thinks this is a success story.

If we elect her as President, expect a lot more “success” stories like Libya.

A known Islamic terror suspect was placed in charge of Hillary Clinton’s local security detail during a trip by the US Secretary of State to Libya, Daily Mail Online can reveal. The shocking security blunder occurred in October 2011 when Clinton made an unannounced visit to Libya following the toppling of Colonel Muammar Gaddafi. Ironically the Secretary of State’s trip was shrouded in secrecy due to security concerns. The trip was intended as a triumphant tour to show Mrs Clinton’s support for the Libyan people and build diplomatic ties at a torrid time. During her visit fierce fighting erupted in Sirte  the last stronghold of the country’s former leader.

A recently-released and heavily redacted copy of a Sept. 12, 2012, Defense Intelligence Agency memo to Secretary of State Hillary Clinton, Secretary of Defense Leon Panetta, the White House National Security Council and the Joint Chiefs of Staff said “the attack was planned 10 or more days prior on approximately 01 September 2012. The intention was to attack the consulate and to kill as many Americans as possible to seek revenge for U.S. killing of Aboyahiye ((ALALIBY)) in Pakistan and in memorial of the 11 September 2001 attacks on the World Trade Center buildings.”

According to the memo, the attack “was planned and executed by the Brigades of the Captive Omar Abdul Rahman (BCOAR). BCOAR is also responsible for past attacks on the Red Cross in Benghazi and the attack on the British Ambassador, they have approximately 120 members.” Rahman is serving a life sentence in a federal prison for his role in the 1993 bombing of the World Trade Center which killed six people in New York.

END_OF_DOCUMENT_TOKEN_TO_BE_REPLACED

You know who’s not #ReadyForHillary? The thousands who’ve died fleeing the Libya she destroyed‏

Hillary Clinton is directly responsible for the humanitarian catastrophe unfolding in the Mediterranean Sea as the death toll of those who drowned fleeing her destabilized Libya approaches 2,500.

END_OF_DOCUMENT_TOKEN_TO_BE_REPLACED

If this is true, and I have no reason to distrust the word of Judge Andrew Napolitano or the people at Fox News, then it should be the end of Hillary Clinton’s political career.

In a recent Fox News segment on the Sean Hannity show, Judge Andrew Napolitano explained that Hillary Clinton’s emails provide the location of both Ambassador Chris Stevens in Libya, as well as the location of fighter jets during NATO bombings. Judge Napolitano (along with several other Fox News employees) have been tasked by Fox News to sift through the pages and pages of emails and other data that has been provided by the government proving the malfeasance and criminal behavior of Hillary Clinton while Secretary of State.

Clinton’s decision to use an unsafe non-government server to hide (er, store) her email correspondence is a problem in and of itself, but now that there is solid evidence that she could have been the source of horrible leaks… her behavior rises above criminal and moves to seditious, perhaps even treasonous. We now know that it is far more likely that Hillary Clinton and the Obama administration are to blame for the death of Chris Stevens than it ever was that some stupid YouTube video was the catalyst.

This latest revelation should be a bombshell, it should lead to enormous changes in our political landscape… but thus far, it’s barely registered with the main stream media.

Read more at http://eaglerising.com/22052/hillary-clintons-unguarded-emails-may-have-revealed-a-huge-secret-to-muslim-terrorists/#OZPyq8rrezvCjvcG.99
by 1dragon

Hillary Clinton withheld Benghazi-related emails from the State Department that detailed her knowledge of the scramble for oil contracts in Libya and the shortcomings of the NATO-led military intervention for which she advocated.

Clinton removed specific portions of other emails she sent to State, suggesting the messages were screened closely enough to determine which paragraphs were unfit to be seen by the public.

For example, one email Clinton kept from the State Department indicates Libyan leaders were “well aware” of which “major oil companies and international banks” supported them during the rebellion, information they would “factor into decisions” about about who would be given access to the country’s rich oil reserves.

The email, which Clinton subsequently scrubbed from her server, indicated Clinton was aware that involvement in the controversial conflict could have a significant financial benefit to firms that were friendly to the Libyan rebels.

END_OF_DOCUMENT_TOKEN_TO_BE_REPLACED

These two actions fostered the climate for the preventable September 11, 2012 terror attacks. Yet many in the media seem uninterested in exploring the reasons why the United States intervened in Libya in the first place, or the role that then-Secretary of State Hillary Clinton, now running for president, played in pushing the United States to intervene there.

END_OF_DOCUMENT_TOKEN_TO_BE_REPLACED

Sure seems we’ve come to a point where the rule of law means little to the Obama administration – or the oath taken to faithfully execute our laws.

With that in mind, Article I, Section 8, Clause 11 of the United States Constitution, at times referred to as the War Powers Clause, vests in the Congress the power to declare war, in the following wording: “[The Congress shall have Power…] To declare War, grant Letters of Marque and Reprisal, and make Rules concerning Captures on Land and Water.”

I searched Article II to see if there was anything to contradict these enumerated powers bestowed upon the U.S. Congress – and found nothing. Now, I can immediately draw your attention to President Obama’s ill-conceived venture into Libya – which we have addressed several times, most recently here discussing the involvement of ISIS there – and where was the “humanitarian crisis? I could also alert you to the fact that we are deploying troops back into Iraq, but there has been no declaration from Congress on war – and we are dropping bombs and folks are shooting – a basic definition of war, as far as I know.

END_OF_DOCUMENT_TOKEN_TO_BE_REPLACED

The State Department is updating its plans to evacuate the U.S. embassy in Yemen’s capital city of Sana’a amid growing violence in the country between military and rebel forces, CNN reported.

Although U.S. Defense Department officials had been watching the situation for several weeks, the violence has “grown more serious” over the past several days, according to CNN Pentagon correspondent Barbara Starr, and now included fighting “around the airport in the capital.”

“When you can’t rely on commercial air traffic to get diplomats out, that’s when the military begins to watch very carefully,” Starr said Tuesday on CNN’s “Legal View with Ashleigh Banfield.”

Any request to evacuate would have to come from the U.S. ambassador to Yemen, Starr said, but added “that has not yet happened.” She said after the 2012 bombing of the U.S. consulate in Benghazi, Libya, American officials don’t “wait around” for violence to escalate.
However, Starr said if the U.S. did close the embassy, diplomats would “lose their window into understanding what al-Qaida is up to in that country (and) any plots against the U.S.”