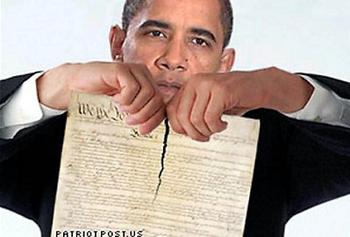 Freedom Outpost
The further I travel down this rabbit hole, the more I feel divorced from the good conservative people that I choose to call my own. I hold some stories back from our readers. My thought is that people have a hard enough time embracing the basic fact that our government is corrupt on both sides of the aisle. If you knew how corrupt I thought these people really were, I feel like you’d rush to the phone and soon bad men would show up to haul me off in a straitjacket.

Do they still do that?

Regardless, today I want to show you something that might leave you questioning everything around you.

Welcome to my world.

In 1975 a representative named Joe Bingham introduced an amendment to remove the “natural born citizen” constitutional requirement to become President.

Why is that important?

Because it was not until almost 30 years later that the issue would be addressed again. And it was not addressed only once, but multiple times. This is all part of congressional record.

Remarkably, it just so happened to coincide with the meteoric rise of a man named Barack Obama who currently sits in the People’s House.

I am about to share with you a brilliant piece of research from the Article II Political Action Committee. After reading it the foremost question on my mind is, “If the natural born citizen definition only requires one citizen parent then why did they seemingly try so hard to change the law for Barack Obama?”