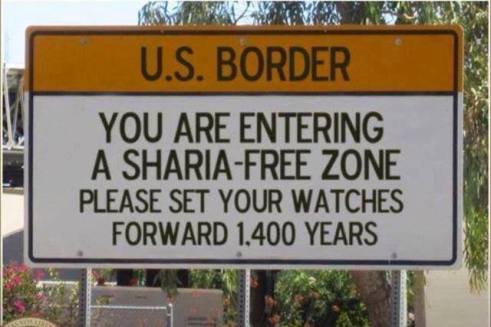 Muslims across the country are OUTRAGED at the Florida Senate, that has now approved the American Laws for American Courts Legislation, 24-14. Don’t worry though, the Democrats are all on your side, guys. Maybe you can have a anti-bacon sit-in somewhere to celebrate your loss:

Vote by Full House on HB 903 is pending.

The Florida Senate has approved American Laws for American Courts legislation which would prohibit Sharia and other foreign laws. The full senate voted voted 24 to 14 in favor of SB 386 titled Application of Foreign Law in Certain Cases at the third reading during the Monday, April 28, 2014 session.

This legislation, commonly known as “American Laws for American Courts”, would prohibit Florida courts from considering certain provisions of foreign laws, including Islamic Sharia law, if such provisions are inconsistent with the Florida and United States of America Constitutions.

If Florida courts accept provisions of Islamic Sharia law or other foreign laws or legal codes which are inconsistent with American laws it will undermine public policies enacted by our representative form of government and change our value system.

And here is how they voted:

Clearly, the Democrats voted MORE in favor of Sharia Law. Why? When do supposed ‘civil liberties’ and ‘religious freedom’ supersede common sense? The rights of your ‘religion’ to exist and have laws STOP when they begin to trample on the rights of others to do the same. You want equal rights? Fine, but don’t expect America to stop serving bacon or force its Christian colleges to use chapel bells to announce the Muslim call to prayer. It’s called a watch, so use it. People are sick and tired of being sensitive to every little thing that ‘offends’ others. Don’t want to hear that? Well cry me a river, build yourself a bridge, and get over it.

Read more at http://joeforamerica.com/2015/05/muslims-across-country-outraged-florida-approves-anti-sharia-bill/
by 1dragon

No-go areas are a frightening aspect of the ongoing Islamic conquest of Europe. Local authorities have ceded control of these to Muslims, who live by their own laws and sneer at those of the country they have invaded. Welfare payments go into the no-go areas; nothing except violence comes out. Emergency vehicles require police escorts, as they are often attacked by hostile savages.

Europe has a much larger Muslim population than the USA. But already we have no-go areas too:

It starts off innocently enough with them wanting to share a neighborhood with like-minded, religious thinking community dwellers. They slowly grow larger, and incorporate more Muslims into the area, and begin buying up property as fast as it becomes available or leasing it. Then they install their own courts, government, justice and punishment system, Sharia law. At that point threats are aimed at anyone living in the neighborhood that is non-Muslim. These areas have been formed with ‘ethnic cleansing’ harassment tactics; forcing existing residents out of their homes by Muslim provocation and fear of property damage and physical harm. It’s very effective, and the results advantageous to the Muslim community in establishing another ‘no-go Sharia controlled zone.’

There goes the neighborhood.

In the U.S., Dearborn, Michigan: Over 100,000 Muslims, 45% of the city has settled into their first ‘no-go’ zone. The city and police officials have been sued in many cases that allege discrimination “against Christians” effectively by the authorities applying Sharia law. Dearborn-Dar-al-Islam, (a place governed by Islamic Sharia law). …

If Americans don’t wake up and get their heads out of the sand fast, what’s quickly overtaking Europe will consume the United States. Muslim religious beliefs do not supersede state and federal laws; the Constitution is the law of the land. And yet, we are being invaded, and nothing is being done to stop them.

On the contrary, the federal government is aggressively promoting Islamic colonization. The Obama Regime imported nearly 300,000 colonists from Muslim countries in 2013 alone.

Unless reversed decisively, this immigration jihad will inevitably lead to more violence inflicted by the so-called Religion of Peace.