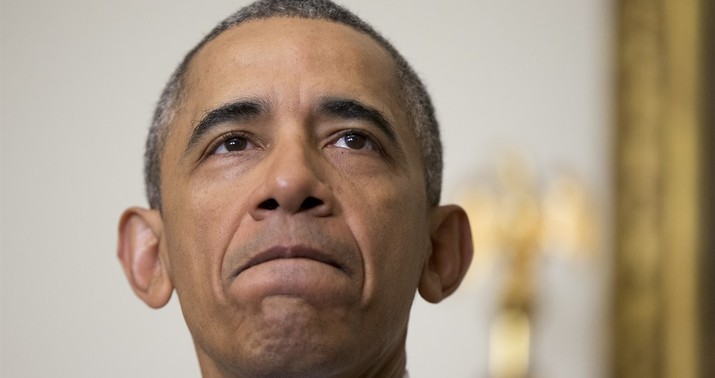 END_OF_DOCUMENT_TOKEN_TO_BE_REPLACED

The so-called “Iran deal” is the gift that keeps on giving – to the mullahs. It was bad enough in its original form: utterly ineffective in preventing the Iranian regime from acquiring nuclear weapons, wholly unverifiable; and a vehicle for transferring $150 billion, with the certain knowledge that some of it would pay for terrorism.

These damning attributes were a product of serial concessions made by Barack Obama and John Kerry in the final months of the negotiations.

But ever since the deal was announced, it seems President Obama has been making fresh concessions. Ballistic missile sanctions and promised on-site inspections are gone. And now, Team Obama is giving Iran access to international banking services using dollars and rewriting regulations to free up billions more in frozen assets.

Obama’s “legacy” will get Americans killed.

It’s usually the first warning to someone who’s about to enter into a complicated legal agreement: Be sure to read the fine print.

Looks like President Obama and the team that negotiated the disastrous nuclear deal with Iran didn’t do that. Or, worse still, they did — but hoped no one else would. Too late for that.

Fox News’ James Rosen reports some senior US officials involved in the negotiations have concluded that a key element of the deal conflicts with federal law and can’t be implemented.

Unless Congress changes the law, that is. But since majorities in both houses opposed the deal, why would they help it now?

Especially since it involves sanctions relief — freeing up tens of billions to Tehran for use in supporting its terrorist allies.

At issue is a provision allowing foreign subsidiaries of US firms to do business with Iran.

Oops: The Iran Threat Reduction and Syria Human Rights Act, signed into law by Obama in 2012, specifies that this can only happen if Iran is removed from the State Department’s list of terror sponsors and the president certifies that Iran has permanently ceased the pursuit of weapons of mass destruction.

Iran has said loudly it won’t stop boosting terror, and the deal doesn’t even pretend to permanently stop it from building nukes.

If the deal were a treaty ratified by Congress, it would be near-impossible to challenge in court. But it’s not a treaty — and this fine-print problem is an open invitation to legal challenge.

The “imperial presidency” was an epithet applied to Richard Nixon’s administration. Nixon was a piker compared to Barack Obama.

In recent days, Obama has fashioned and jammed through Congress an unsigned, unverifiable and unworkable deal that assures Iran will get nuclear weapons.

Today, he’s set to agree with Communist China’s dictator, Xi Jinping, to restrict our economy in the name of curbing global warming and to constrain – and possibly expose – our cyberwarfare capabilities in the preposterous belief that China will do the same. If the precedent of the Obamabomb deal with Iran applies, neither would be subject to congressional quality control.

Next week, Obama will meet with his Russian counterpart, with whom he promised he’d have more flexibility. What’s next? Our capitulation on Ukraine? Acceding to Putin’s military incursion in Syria?

Assuming they had them in the first place, our “leaders” have sold all of their souls, conscience, integrity, morality and any dignity they had to the highest bidders. What remains is a soulless class of once-human beings bent upon collecting as much illusory power and ill-gotten wealth as is possible. Practicing the old game of “He (or she as it were) wins who has the most at the end” these creatures actually seem to be grasping tightly to the ever-false beliefs that they are either immortal or actually can take it with them. Neither is true.

If by now, since the election of what would become Dictator-in-Chief Barack Hussein Obama, those in power (politically and militarily) cannot perceive the intentional destruction of the United States of America by those within the White House itself, then these should surely be physically removed from their positions and replaced by those who still possess at least a streak of intelligence. There is no more government of, by, and for the people and has not been for some time.

END_OF_DOCUMENT_TOKEN_TO_BE_REPLACED

Looks like the Marxist architect of Obamacare also had a major say in putting forth the Iran Deal. Robert Creamer was convicted in 2005 for tax violations and bank fraud. He served time and was under house arrest. While in prison, he crafted the core underpinnings of Obamacare. Creamer is a political consultant who is very close to Barack Obama and is married to Jan Schakowsky, the Marxist Congresswoman from Illinois.

While on the inside, he wrote, Listen to Your Mother: Stand Up Straight! How Progressives Can Win. Obamacare was only the first major step in a radical Marxist battle plan. Next came Amnesty for illegal aliens, which is ongoing. Yeah, that’s right… Creamer was behind that too.

END_OF_DOCUMENT_TOKEN_TO_BE_REPLACED

You may not realize that, when U.S. Navy SEALs showed up at Osama bin Laden’s hideout for the purpose of putting a bullet in his brain, they also carried off a sizeable number of documents pertaining to Al Qaeda’s operations around the world, including information about which nations provide substantial support in the form of both financing and access to territory, training facilities and so on.

I’ll give you one guess which country was a prominent supporter. I’ll give you a hint: Obama and Kerry recently negotiated a deal with this country that relieves it of economic sanctions while making it much easier for it to cheat on inspections of nuclear weapon facilities it is not supposed to have. Any country coming to mind?

Obama is now in possession of extensive documentation concerning the Iran-Al Qaeda nexus, but don’t expect to see it any time soon. As the Wall Street Journal reports, Obama refuses to make most of these documents public:

END_OF_DOCUMENT_TOKEN_TO_BE_REPLACED

Just when I thought nothing could further lower my opinion of Colin Powell, who as a reward for his racial background was offered great honors by Republicans, and who repaid these honors by twice endorsing Barack Obama for president:

That would be highly debatable even if Iran’s compliance could be reliably verified under the deal. Since there is no guarantee of compliance, it is not debatable but laughable.

Apparently solidarity with Obama trumps everything — even the need to prevent our worst enemy and the world’s leading sponsor of Muslim terrorism from acquiring the means to destroy our country.

In July Barack Obama lashed out at CBS reporter Major Garrett after he asked him about the four Americans the administration left behind to languish in Iranian prisons.

Obama was defending his nuclear deal with Iran when Garrett asked him about the US hostages in Iran.

Obama: I got to give you credit Major for how you craft those questions. The notion that I’m content as I celebrate with American citizens languishing in Iranian jails. … Major, that’s nonsense and you should know better.

Of course, that is exactly what he did.
The Obama administration did nothing to free American hostages during their talks with the Iranian regime.

Obama was negotiating with Iran for several years.
Obama released a top Iranian scientist as part of the deal but left the Americans to rot in hell in Iranian prisons.

Now that the deal is done – with 34 Democrats supporting Iran over Israel – the Khamenei regime is leaking information on the deal to humiliate Barack Obama.

by 1dragon
Moonbattery
Bill Still presents another theory as to why Shrillary’s emails from her days as Secretary of State must be kept secret at any cost; they could reveal that the “negotiations” during which Obama and Kerry gave the green light to Iran’s development of nuclear weapons were a sham: –
See more at: http://moonbattery.com/?p=62044#sthash.TL0H40DG.dpuf