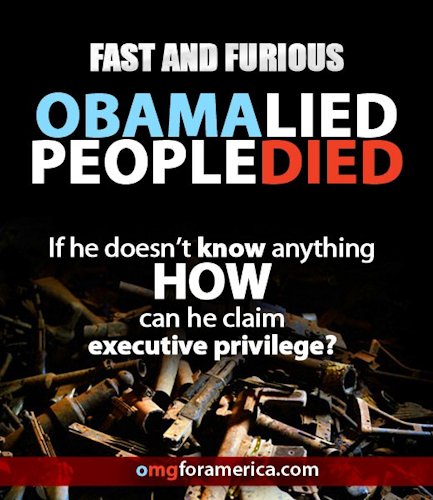 As the Democrat Lilliputians try to make Atty. Gen. William Barr the second cabinet officer to be held in contempt of Congress, it is serves us well to remember that Democrats didn’t quite have the same attitude toward a President protecting his administrative turf when the first, Eric Holder, was under President Obama’s executive privilege umbrella during the Fast and Furious scandal (sorry, Joe).

Unlike the current “collusion delusion”, Holder/Obama’s Fast and Furious gun-running operation involved real crimes, real dead bodies, and real obstruction of justice as administration officials colluded with Mexican drug cartels to supply them with high-powered semi-automatic weapons, one of which was used to murder Border Patrol Agent Brian Terry. As PJ Media notes:

END_OF_DOCUMENT_TOKEN_TO_BE_REPLACED

Judicial Watch announced today that it received from the Obama Department of Justice (DOJ) a “Vaughn index” detailing records about the Operation Fast and Furious scandal.  The index was forced out of the Obama administration thanks to JW’s June 2012 Freedom of Information Act (FOIA) request and subsequent September 2012 FOIA lawsuit (Judicial Watch v. Department of Justice (No. 1:12-cv-01510)).  A federal court had ordered the production over the objections of the Obama Justice Department.

The document details the Attorney General Holder’s personal involvement in managing the Justice Department’s strategy on media and Congressional investigations into the Fast and Furious scandal.  Notably, the document discloses that emails between Attorney General Holder and his wife Sharon Malone – as well as his mother – are being withheld under an extraordinary claim of executive privilege as well as a dubious claim of deliberative process privilege under the Freedom of Information Act.  The “First Lady of the Justice Department” is a physician and not a government employee.

END_OF_DOCUMENT_TOKEN_TO_BE_REPLACED

Hmm..don’t suppose they could be hiding anything, do you?

Attorney General Eric Holder and his Department of Justice have asked a federal court to indefinitely delay a lawsuit brought by the watchdog group Judicial Watch. The lawsuit seeks the enforcement of open records requests relating to Operation Fast and Furious, as required by law.

Judicial Watch had filed, on June 22, 2012, a Freedom of Information Act (FOIA) request seeking all documents relating to Operation Fast and Furious and “specifically [a]ll records subject to the claim of executive privilege invoked by President Barack Obama on or about June 20, 2012.”

The administration has refused to comply with Judicial Watch’s FOIA request, and in mid-September the group filed a lawsuit challenging Holder’s denial. That lawsuit remains ongoing but within the past week President Barack Obama’s administration filed what’s called a “motion to stay” the suit. Such a motion is something that, if granted, would delay the lawsuit indefinitely.

When Stephanie Cutter, the deputy campaign manager for President Obama’s  reelection, alleged that Gov. Mitt Romney may have committed a felony by  providing false information in Securities and Exchange Commission filings, she  revealed how desperate the president is to gain political support.

Ms. Cutter’s unjustified and completely unfounded assertion reminds me of the  many felony crimes our president has admitted to committing. President Obama has  written in his two autobiographies about smoking van loads of marijuana and  using cocaine. Both the possession, use and transfer of marijuana and cocaine  are felonies, but Cutter gives her man a pass.