It has been promised, and confirmed by the administration, that President Obama intends to bypass Congress and take “Executive action” to grant amnesty to millions of illegal immigrants, including the criminals and terrorists among them.

But now sheriffs around the country are speaking up, issuing a dire warning about the likely results of a blanket amnesty granted by Obama. (H/T MRCTV)

They are warning of the coming increase in crime, disease, and terrorism, should Obama grant amnesty. They also they believe Obama’s amnesty will encourage more criminals and terrorists to join the millions of illegal immigrants already flooding across our porous southern border.

END_OF_DOCUMENT_TOKEN_TO_BE_REPLACED

Now that the increasingly erratic and desperately sleazy Obama campaign has decided to cavalierly throw around the word “felony” when it comes to pushing a campaign of lies surroundingMitt Romney and Bain Capital, this seems like a good time to jump in the wayback machine for a look at the actual convicted felons, criminals, and dubious characters who have always been associated with Barack Obama’s political life.

What? What’s that? You don’t want to talk about this?

END_OF_DOCUMENT_TOKEN_TO_BE_REPLACED

I’ve watched a number of the National Republican debates. Some of the candidates are squabbling furiously in an attempt to emerge head or shoulders above the competition. It’s getting bloody. These aspirants seek the Party’s nomination to supplant Barack Hussein Obama, less than a year from now.  I continue to be astounded how petty and juvenile the party of the Elephant has become in vetting its candidates. Does the elite group of eight realize who the real foe is? 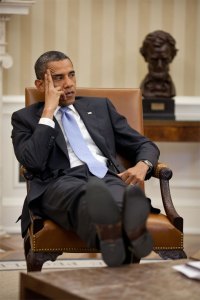 END_OF_DOCUMENT_TOKEN_TO_BE_REPLACED

Barack Obama has settled on his election game plan: Mock your opponents as unworthy at every turn.

Now that the media has firmly established the messiah’s “cred” as a magnificently bold, brave, and decisive Commander in Chief, he feels free to move back into domestic politics. It is strange indeed. No sooner has he used the Military for his own opportunistic resume enhancement than he has placed the War on Terror [aka “Overseas Contingency Operations” for true believers] on the far rear boiler plate.