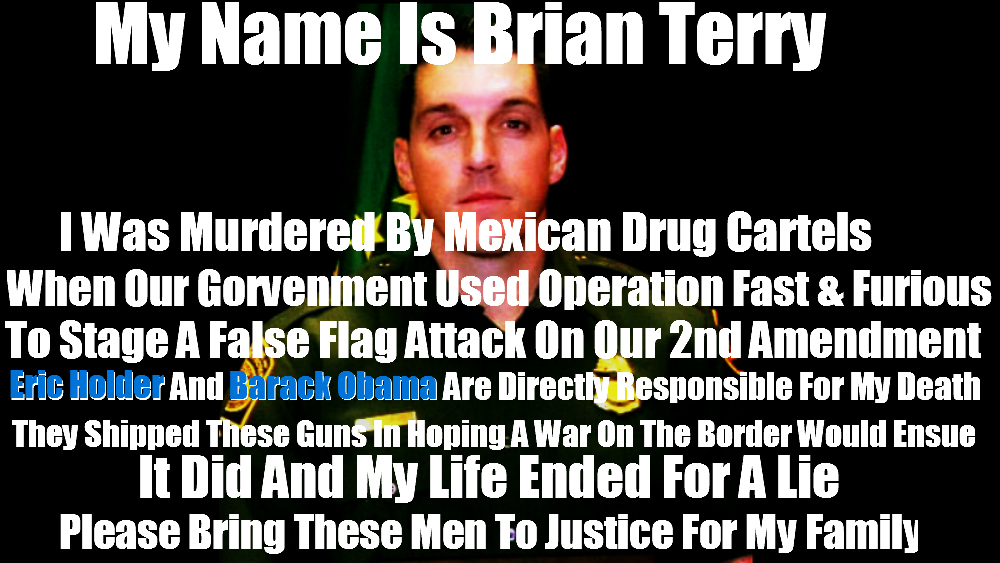 Just some Mexican guys out for a walk in the desert.

When a jury gathers next week for the trial of two men charged with the murder of a U.S. federal agent, it will not hear any details of how two guns found at the murder scene were part of a U.S. government-sanctioned weapon program, a federal judge has ruled.

Friday morning, U.S. District Court Judge David Bury agreed with U.S. prosecutors to keep the details of Operation Fast and Furious out of the upcoming trial for the murder of U.S. Border Patrol agent Brian Terry.

Terry was killed in a firefight with a crew of armed Mexican men who were scouting the desert in search of drug smugglers to rob. Two AK-47 variants were found at the crime scene. Those rifles were purchased in a gun-tracking operation overseen by the Bureau of Alcohol, Tobacco, Firearms and Explosives, Operation Fast and Furious. ATF officials had hoped weapons purchased at a Glendale gun store would eventually turn up in the hands of high-level Mexican drug traffickers. Instead, ATF lost track of more than 1,400 guns. The two found at Terry’s death were part of the operation, congressional investigators later found.

The U.S. asked the judge this summer to keep the details of Fast and Furious out of the murder trial, stating it was irrelevant.

Bury agreed. “I agree with one exception. I can’t find any relevance expect if the government should open the door,” he said.

If the government brings up the origins of the guns found, Bury ruled that defendants can then bring up Fast and Furious.

Bury ordered the defendants “not to refer to … or elicit any testimony regarding Operation Fast and Furious. Understood?”

On December 14, 2010, Border Patrol Agent Brian Terry was shot dead by a group of suspected drug cartel along the Mexican border in Peck Canyon, northwest of Nogales, Arizona. The guns used to kill Brian Terry were traced back to Operation Fast and Furious.

In September 2011 the Attorney General of Mexico confirmed 200 murders happened in Mexico as a direct result of Operation Fast and Furious.

In July 2013 A high-powered rifle lost in the Fast and Furious program was used to kill a Mexican police chief in Jalisco state.

Now this… A gun from the failed U.S. operation known as “Fast and Furious” turned up at the scene of a shootout between Mexican authorities and alleged cartel gunmen earlier this month, according to CNN. U.S. officials told CNN at least one AK-47-style gun that could be traced back to the failed gun-walking scheme was found at the scene. The shootout on Dec. 18 left five alleged cartel members dead in Puerto Penasco, a popular tourist site in Mexico.

On December 14, 2010, Border Patrol Agent Brian Terry was shot dead by a group of suspected drug cartel along the Mexican border in Peck Canyon, northwest of Nogales, Arizona. The guns used to kill Brian Terry were traced back to Operation Fast and Furious.

In September 2011 the Attorney General of Mexico confirmed 200 murders happened in Mexico as a direct result of Operation Fast and Furious.

Now this…
A high-powered rifle lost in the Fast and Furious program was used to kill a Mexican police chief in Jalisco state.
The LA Times reported, via Yid With Lid:

A high-powered rifle lost in the ATF’s Fast and Furious controversy was used to kill a Mexican police chief in the state of Jalisco earlier this year, according to internal Department of Justice records, suggesting that weapons from the failed gun-tracking operation have now made it into the hands of violent drug cartels deep inside Mexico.

Luis Lucio Rosales Astorga, the police chief in the city of Hostotipaquillo, was shot to death Jan. 29 when gunmen intercepted his patrol car and opened fire. Also killed was one of his bodyguards. His wife and a second bodyguard were wounded.

Local authorities said eight suspects in their 20s and 30s were arrested after police seized them nearby with a cache of weapons — rifles, grenades, handguns, helmets, bulletproof vests, uniforms and special communications equipment. The area is a hot zone for rival drug gangs, with members of three cartels fighting over turf in the region.

A semi-automatic WASR rifle, the firearm that killed the chief, was traced back to the Lone Wolf Trading Company, a gun store in Glendale, Ariz. The notation on the Department of Justice trace records said the WASR was used in a “HOMICIDE – WILLFUL – KILL –PUB OFF –GUN” –ATF code for “Homicide, Willful Killing of a Public Official, Gun.”

I think the Obama and his Adminstration have spent way to much time with Hollywood actors. You don’t bring blanks or bean bags to a gun fight. Especially, when you go up against Mexican Drug Cartels.

US Border Agent Brian Terry was shooting beanbags at cartel members before they shot him dead with assault rifles. (Truth about Guns)

For the first time the Obama Administration today admitted that Brian Terry and fellow border agents were firing beanbags and not bullets during their shootout with armed cartel members. FOX News reported, via Free Republic:

END_OF_DOCUMENT_TOKEN_TO_BE_REPLACED

Congressman John Boehner, the House Speaker better known for displays of weeping than of courage, is reportedly cutting a deal with Eric Holder which would provide a “mutually satisfactory” outcome in Barack Obama’s criminal, gun running endeavor Operation Fast and Furious.

END_OF_DOCUMENT_TOKEN_TO_BE_REPLACED

In April 2009 Barack Obama traveled to Mexico and blamed US gun sellers for violence south of the border. Obama told his Mexican audience, “This war being waged with guns purchased not here but in the United States.”  Just to be sure, a few months later the Obama Administration started running their own guns to Mexico, at least 2,000 guns.

END_OF_DOCUMENT_TOKEN_TO_BE_REPLACED

You know when the Department of Homeland Security has its priorities straight when Secretary Napolitano is creating a task force to battle climate change.

Something to note: Napolitano was at this conference just two days after Border Patrol Agent Brian Terry was murdered in the Arizona desert by bandits.