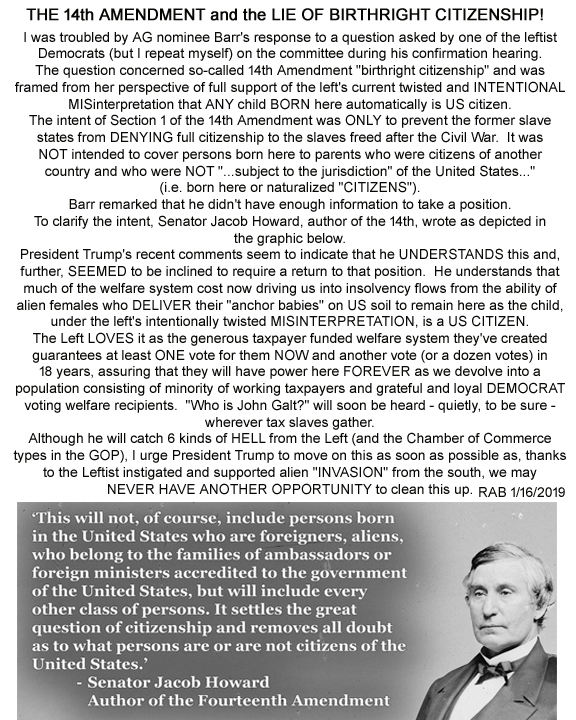 “The United States have not recognized a double allegiance. By our law a citizen is bound to be ‘true and faithful’ alone to our government.”

With the 2016 election heating up, many Americans are finding the opportunity to express anger over the nation’s illegal immigration problems.

Donald Trump, a long-shot as a presidential candidate (having never held public office), shot to the top of the polls after making seemingly incendiary remarks about illegal immigrants. I write “seemingly” because many believe his statements to be blunt truth, even if politically incorrect.

In addition to allegations of criminals coming across the southern border from Mexico, Trump is now broaching a question long hidden in the recesses of debate: Does the Constitution grant birthright citizenship to all born within the geographic borders of the United States? This question directly ties to immigration, as the babies of illegal immigrants are being granted immediate citizenship, thereby “anchoring” residency and citizenship rights to family members. Hence the term “anchor baby”. The numbers involved run into the millions, affect the nation in many ways, and cannot be overlooked. It’s time to challenge the conventional wisdom of birthright citizenship. Let me explain.

END_OF_DOCUMENT_TOKEN_TO_BE_REPLACED

Candidate Donald Trump’s recent proclamation that he is opposed to so-called “birthright citizenship” for the offspring of illegal aliens born in the United States has, like many of his campaign statements, set off hysterical paroxysms of outrage and protest. I do not support Donald Trump for President, but much of his appeal lies in the fact that he is willing to address taboo subjects in a way that the public—tired of candidates and elected officials cowed by rigid protocols of political correctness—finds refreshing. The topic of “birthright citizenship” is a perfect example. Within a week of issuing his immigration reform plan calling for the end of “birthright citizenship,” there has been more discussion (fueled by considerable popular interest) of this poorly understood aspect of immigration policy than I can remember in my lifetime. Whether or not one agrees with Trump’s platform, one has to concede that he is advancing a national conversation on a critically important issue.

On Face the Nation on August 24, Sen. Ted Cruz re-affirmed that he is opposed to “birthright citizenship” as a policy matter—a position he has held since 2011—and declared that it should be repealed, either by an act of Congress or a constitutional amendment (both of which are, in his opinion, “good faith positions”). Other candidates disagree, or decline to take a position.

The issue is whether children born in the United States—even if their parents are foreign nationals who entered this country illegally—automatically become citizens. Current law supposes that they do—a concept termed “birthright citizenship.” Many people erroneously think this concept is dictated by the Constitution or enshrined in a U.S. Supreme Court decision. Not so. Section 1 of the 14th Amendment—the Citizenship Clause—states that “All persons born or naturalized in the United States and subject to the jurisdiction thereof, are citizens of the United States and of the State wherein they reside.” (Emphasis added.) The origins of this language are a bit hazy, but it must be recalled that the purpose of the 14th Amendment was to correct the infamous Dred Scott v. Sandford decision (1857) and recognize citizenship for the newly freed slaves (but not members of Indian tribes living on reservations). The language of the Citizenship Clause derived from the Civil Rights Act of 1866, enacted by the same legislators (the 39th Congress) who framed the 14th Amendment. The Civil Rights Act of 1866 conferred citizenship on “All persons born in the United States, and not subject to any foreign power, excluding Indians not taxed….” (Emphasis added.) Foreign nationals resident in the United States, and children who become citizens of a foreign country at birth (by virtue of their parents’ citizenship) would obviously be excluded from this definition.

END_OF_DOCUMENT_TOKEN_TO_BE_REPLACED

Political bridge-building is usually considered a good thing, but when the “bridge” you are building is the abridgement of the separation of powers, not so much. More Obama Domestic Abuse: Now Look What You Made Me Do… on tap.

In an alarming development, word comes from Mark Levin and others in Congress that the President is prepping to raise the debt ceiling unilaterally. You know — usurping the power of the purse granted solely to Congress. That ladies and gentlemen, is impeachment worthy.

Mark Levin gets it and America better pay attention:

END_OF_DOCUMENT_TOKEN_TO_BE_REPLACED

Thanks to the Democrat Party, racial politics has become a full blown weapon.  As deconstructionists who wish to show America as being a racist nation so that they may better be able to put into place their own liberal agenda, the image of Trayvon Martin laying on the ground with a bullet in him has created a racial divide that is doing wonders for the liberal left agenda.

As race hustlers, who have made that case much larger for their own agenda, it is inevitable that the effects of the case will spill over into other issues, such as immigration.

Racial politics is a very destructive weapon, and the opponents of the U.S. Constitution are doing whatever they can to create an environment of rage in relation to race in America.  The “race card” tool is also one that the Left is using in regards to illegal immigration.  The issue of immigration, however, has little to do about immigration with these people as much as it has to do with changing America at its foundation, adding new voters to their cause, and betraying the Constitution of the United States.

END_OF_DOCUMENT_TOKEN_TO_BE_REPLACED

Constitutional law expert and professor, Dr. Herbert Titus, shines a 300-year-old light of truth on leftist lies and propaganda about Obama’s illegal presidency further undermining the liberal establishment’s criminal scheme to hide facts about Obama’s secret past. While the lame stream media continues to defend Obama, and his political opponents use his covert criminal acts as political currency at the expense of the American people, vintage America is preparing to unleash a particularly savage wrath upon a rogue, obstinate, liberal ruling class.

New York, NY – Apologists and abettors of the most prolific political crime in American history have attempted for more than five years to conceal the facts about the birth and life of the man known as “Barack Obama”. Now, as part of an ever increasing consensus and growing body of evidence, a formal declaration by one of America’s most experienced legal professionals and a highly respected practitioner of Constitutional law thrusts a dagger of truth into the heart of the obotic deception. “Barack Obama does not qualify as a natural born citizen to hold the office of the Presidency,” declares Dr. Herbert W. Titus, J.D., a Constitutional law expert with more than 30 years of experience serving as a juris counsel and partner with William J. Olson Attorneys in Washington D.C.

END_OF_DOCUMENT_TOKEN_TO_BE_REPLACED

Historians agree empires and presidencies die from imperial overreach. Now Barack Obama’s closest allies in the Democratic Party, the far-Left, and the media are encouraging him to take actions that will lead inexorably to his impeachment. The president’s hubris and lawlessness seem destined to collide with Washington’s tense polemical atmosphere in a showdown that will put his presidency on the chopping block.

The leaders of the House Democratic Caucus this week urged the president to usurp Congressional authority and order the government to continue borrowing money, (mis)using the 14th Amendment. Caucus Chairman John Larson of Connecticut called the provision “the fail-safe option” to assure Republicans do not hold the American people hostage.” Larson added House Democrats are “prepared to stand behind” Obama all the way.

END_OF_DOCUMENT_TOKEN_TO_BE_REPLACED

by 1dragon
One Nation Under Fraud

As an American you are asked to take up the mantle of spreading the truth, by
sending this message to everyone you know. Our way of life is in the
balance.

Obama is not a natural born
citizen, because his father is a foreign national.

He also unmasked all the shams used to obfuscate the
meaning, including misquoting case law, redefining the meaning as native born,
citizen at birth, and just plain citizen. Our founders were very clear and
although the meaning of citizen has changed through legislation and the 14th
Amendment, the meaning of natural born citizen has not changed, despite multiple
attempts in the last few years.

There is no gray area. Either members of Congress are liars or they are too stupid to serve in government.