Sometimes I get e-mails that I love to share. This is one of them. Is it Real or is it Memorex? The older and wiser I get, the more I come to understand that anything is possible, especially when it comes to our government.

Another piece falls into place…

When noticed, his staff said his ring was out for repairs.

No reason was given for the missing watch.

So it’s just a coincidence that Muslims are forbidden from wearing jewelry  during the month of Ramadan?

(think about that one)

Can’t possibly be that, because although he hasn’t gone to a Christian church service since entering the White House, we know he’s a committed Christian ’cause he said so during the campaign.

And how convenient to be “on vacation” in Hawaii over Christmas so he doesn’t have to have the Christmas photograph of him and his family attending Christmas services with a Bible in his hand—-his ringless and watchless hand.

…. yeah, and I’ve got a bridge to nowhere to sell you also.

Are the American people EVER going to start thinking for themselves?

The drivel the media are blathering about Obama’s 2012 race for reelection is absolute baloney! All those talking heads and print [so-called] journalists should be ashamed of themselves for prattling on about this unserious subject while studiously avoiding the urgent issues that threaten the very life of our country.

These are issues that a maniacal Nancy Pelosi, as House Minority Leader in the lame-duck session, is intent on cramming down the already-gagging throats of American voters who loathe her fetish with Marxism so much that on November 2 they decisively returned the House she had appropriated back to We the People. As columnist Ralph R. Reiland writes, it was “…the greatest defeat for a newly elected president in a midterm since…1922.”

Make no mistake about it, when the Obama-Pelosi-Reid-orchestrated disasters listed below take place, this triumvirate will applaud them, as any disaster that befalls our country fits neatly into their vision of Big Bad America. Yes, the very same America that brought them to the pinnacle of prominence, wealth, and power is the country they’re working overtime to destroy.

Here is just a sampling of what’s in store:

END_OF_DOCUMENT_TOKEN_TO_BE_REPLACED

The Obama administration’s first show trial for a violent Guantanamo Bay jihadi in a civilian court — a man who has never set foot in America — and endowing this enemy combatant with full citizenship-level Fifth Amendment rights is unraveling in the courtroom and putting America at risk. 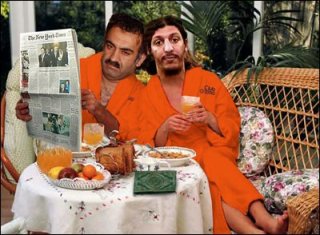 It would be a laughable, “I told you so” moment if it weren’t so dangerous.  Stopping these violent jihadis from killing Americans is the government’s job.  The Obama administration is putting American lives at risk and jeopardizing the integrity of our legal system which was not designed to handle war crimes.

END_OF_DOCUMENT_TOKEN_TO_BE_REPLACED

The CIA is training and equipping Sudan’s National Intelligence and Security Service (NISS) so that the radical Islamic agency may continue its acts of genocide in Darfur and strengthen its stranglehold on East Africa.

This allegation was affirmed by Sudanese officials who told The Washington Post that “it is normal for all intelligence agencies around the world to cooperate on matters of mutual benefit.”

The reports of an on-going relationship between the CIA and the Islamic terrorists in Sudan surfaced several weeks ago with the testimony of former US intelligence officials.

END_OF_DOCUMENT_TOKEN_TO_BE_REPLACED

But first; does one actually exist in our country?  From all appearances it would not seem that a judge who would rule fairly and constitutionally on the question of eligibility of Barack H. Obama to rule as President and Commander in Chief of our armed services can be found.

As reported online in the American Grand Jury article “Md. Judge Denies Request for Obama’s School Records” (that could include a copy of Obama’s birth certificate) September 02, 2010 it becomes obvious there are none.

Our collection of judges may have many, if not all, who could be in a position of being able to rule fairly and Constitutionally on such a question as Obama’s eligibility but finding just one who is not in fear of making such a ruling or is not in the pockets of those who favor leaving the question unanswered, as the presidential usurper does, is doubtful.  Just ask attorneys Phillip Berg or Orly Taitz who have seen judges turn on them for trying.

END_OF_DOCUMENT_TOKEN_TO_BE_REPLACED

You know, if Mr. Obama was as smart as he thinks he is, he would understand that the People question who he is and what he is because of what he is hiding. No President in history has ever sealed all of their files pertaining to their past.

Your religion has been in the news before and it continues today and with good reason. Your grand-father was a Muslim, your father was a Muslim, your step-father was Muslim and you were registered a Muslim when you went to school in Indonesia. You went on your trip through the Middle East apologizing for America being a success. You have repeatedly tried to re-write history by telling America that Muslims played a part in America’s past. As I have stated before, I don’t remember any Muslims traveling with Columbus, coming over on the Mayflower or signing the Constitution.

END_OF_DOCUMENT_TOKEN_TO_BE_REPLACED

According to the Associated Press, the Obama

administration will give away nearly $6 million of American tax dollars to restore 63 historic and cultural sites, including Islamic mosques and minarets, in 55 nations. See the State Department document here.

This is an outrage! Our country is broke. And can you imagine what the ACLU and others on the secular left would say if these monies had been spent to repair Christian churches? They would be screaming “separation of church and state!” Funding Islam on foreign soil with American taxpayer money? Not a whimper.

Secretary of State Hillary Rodham Clinton says the U.S. program to restore Islamic and other cultural sites in other countries is taxpayer money well spent.

Contact your member of Congress today! Ask your representative to immediately condemn this waste of taxpayer dollars and begin an investigation into why American taxpayers are footing the bill to rebuild Islamic mosques overseas.