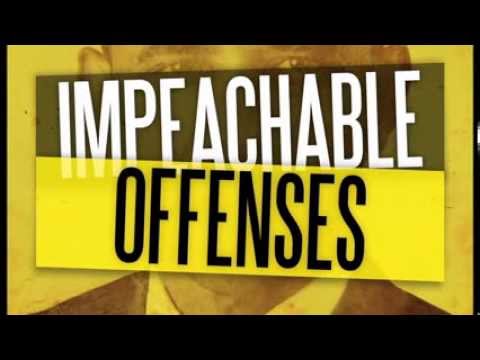 Although it was clear President Obama was mysteriously immune from impeachment, here are just 50 of the many actions he should’ve been impeached for.. This list is by no means complete as IT DOESN’T EVEN INCLUDE OBAMA’S NUMEROUS CRIMES DURING SPYGATE, but take a look..

01) Obama failed to force Eric Holder to resign following his ‘Fast & Furious’ and ‘AP phone records’ scandals and Congress’ finding that Holder was in ‘Contempt of Congress’!

02) Obama willfully deceived the American people by lying about Obamacare not being a tax solely for purposes of getting it passed in Congress then arguing it as a tax before the Supreme Court of the United States. Surprise, IT’S THE HIGHEST TAX INCREASE IN AMERICAN HISTORY; 21 NEW TAXES!

03) Obama amended, changed, altered, and modified the Obamacare law without consent of Congress.

04) Obama unilaterally issued to his friends, 1,200 waivers to Obamacare without approval from Congress.

07) Obama funded an anti-Netanyahu campaign effort in Israel to unseat Bibi Netanyahu.. A clear example of interference in a foreign election!

08) Obama funded a sworn enemy of the United States (the Muslim Brotherhood) towards winning a presidential election in Egypt.

09) Obama continued to aid and abet a sworn enemy of the United States (the Muslim Brotherhood) with F-16 fighter jets and over $250 million while at the same time citing ‘sequestration’ as the reason for closing White House tours and other domestic cuts.

10) Obama sued America’s States over their mandatory Voter ID requirements (The Supreme Court of the United States has already approved Voter ID in their April 2008 ruling)!

11) Obama signed an executive order that allowed Interpol to operate in US territory with impunity and without oversight by Congress, the courts, FBI or local law enforcement.

13) Obama allowed Iran to keep one of our sensitive reconnaissance drones by standing down any attempts to retrieve or destroy it.

15) Obama lied about the number of deportations of Mexican illegal immigrants by overstating them.

16) Obama barred Arizona from doing background checks on illegal aliens the day after the SCOTUS deemed such checks lawful!

17) Obama failed to treat the takeover of sovereign land in Arizona by the Mexican drug cartel as an Act of War!

18) Obama proclaimed his refusal to enforce Federal Law; the Defense of Marriage Act (DOMA) and U.S. Immigration Laws! He also requested the SCOTUS to overturn a Federal Law!

19) Obama lied about Obamacare enabling Americans to “keep your doctor” and “keep your healthcare plan” then signed into law the Unconstitutional government takeover of our health care system!

21) Obama illegally appointed progressive socialists, communists, Fascists and Marxists as “CZARS”, and in other key positions within our government.

23) Obama refused to release the long form PAPER copy of his birth certificate instead of a computer-generated one in PDF format only!

24) Obama masterminded a plot to flood Mexico with assault weapons in an attempt to shut down American firearms dealers (FFL’s).

25) Obama ordered the DHS’s purchases of large quantities of ammunition for the purpose of depleting the supply available to American citizens (De facto gun control)!

27) Obama lied to the American public for weeks about the Benghazi attack being triggered by a “protest over an Anti-Islam video” which we now know was a complete fabrication.

28) Obama and his Secretary of State Hillary Clinton REDUCED security on the Benghazi embassy prior to 09/11/12 even though that Embassy had been attacked twice beforehand and requested additional security numerous times!

29) Obama failed to ask the Libyan government for clearance to send fighter jets into Benghazi to intimidate the attackers!

30) Obama ordered a “stand down” of rescuing SEALs and our Ambassador under attack near our Embassy resulting in the deaths of four Americans because he was afraid any failed mission might negatively impact his re-election campaign!

31) Obama directed Susan Rice to lie about Benghazi on the Sunday news programs multiple times, and then he proclaimed “she has nothing to do with Benghazi”!

32) Obama said he wasn’t aware that Benghazi survivors were being prevented from speaking to Congress.

33) Obama refused to meet with Bibi Netanyahu of Israel, concerning the nuclear Iran threat, while instead appearing on various TV shows including The View!

34) Obama said “The future does not belong to those who slander the Prophet Mohammed”!. Shouldn’t our president be an ADVOCATE for free speech in America, instead of condemning it?

36) Although sworn to protect and defend the U.S. Constitution and all of it’s laws, Obama infringed on our Second Amendment rights by advocating gun control laws!

37) Obama illegally WEAPONIZED agencies such as the IRS in an attempt to destroy pro-Israel and conservative groups such as the Tea Party!

38) Obama denied that he knew anything about the IRS scandal!

39) Obama repeatedly lied to the American people by denying he knows details about scandals occurring within his own administration!

40) Obama used agencies such as the DOJ to illegally acquire and use phone records of the press for leverage in his re-election campaign!

41) Even though sworn to uphold federal law under the United States Constitution, Obama told Gov. Jan Brewer of Arizona that if her law enforcement officers call ICE to take custody of a suspected illegal immigrant, that the Feds won’t come pick them up or deport them!

42) Obama illegally pressured the ‘nonpartisan’ National Labor Relations Board (NLRB) to protect labor unions by strong-arming right to work states by illegally attempting to block the relocation of a private business.

43) Obama forced the closure of mostly conservative-operated automobile dealerships in favor of keeping open dealerships mostly run by donors to his campaign!

44) Obama pressured the Dept. of Energy to give his associates at Solyndra a loan for their lavishly appointed but failed project. Solyndra was a Deep State money-laundering operation!

46) Obama repeatedly downplayed Islamic extremism as the enemy in the War on terror by refusing to say ‘terrorist attack’ and removing all references to Islam from U.S. military training manuals. Obama’s subversive policies and unwillingness to profile Muslims prevented the FBI from stopping the Boston bombing!

47) Obama was derelict in holding any of his agency heads accountable for any of their crimes, including Janet Napolitano and Eric Holder.. These individuals were allowed by Obama to keep their jobs after having committed perjury before Congress and other, more serious crimes!

48) Obama permitted a Muslim cleric to desecrate Navy SEALs at their own memorial service.

49) Obama, without consent of Congress, unilaterally sent billions of dollars to Iran, including plane loads of laundered foreign cash delivered directly to Iran.

4 thoughts on “50 IMPEACHABLE OFFENSES COMMITTED BY PRESIDENT OBAMA, FOR STARTERS..”