For eight years Barack Obama promised to “fundamentally transform” America yet after just three years of a Trump presidency, the Age of Obama is an increasingly distant and negligible moment in U.S. history.

Clearly, a castle built upon sand and self-obsession does not a lasting legacy make…

Via The Washington Examiner:

How did Barack Obama’s policy legacy turn out to be so fleeting and rickety?

Hadn’t Obama’s ascent transformed a nation forever, stirring the American soul and sending thrills up the leg of the commentariat? Hadn’t his election, as Jesse Jackson Jr., then in Congress rather than on parole, noted, been “so extraordinary that another chapter could be added to the Bible to chronicle its significance?”

Not just anyone can win a Nobel Prize for their “extraordinary efforts to strengthen international diplomacy and cooperation between peoples” before ever engaging in a single act of mediation. Then again, this was a man who had promised to marshal the forces of all mankind, the men and women who’d failed to live up to his lofty expectations for the past 150,000 years, to finally start to “heal” the earth.

Bill Clinton might have felt your pain, but Obama, noted San Francisco Chronicle columnist Mark Morford in 2008, was a “lightworker,” imbued with the supernatural ability to intuit exactly what an entire nation was thinking. It was not “merely his youthful vigor, or handsomeness, or even inspiring rhetoric,” Morford preached (and gushed), it was that the new president was a “rare kind of attuned being who has the ability to lead us not merely to new foreign policies or health care plans or whatnot, but who can actually help usher in a new way of being on the planet, of relating and connecting and engaging with this bizarre earthly experiment.” (My goodness! Compare that groveling “Obama is God” example to how the media treats President Trump.)

Obama had arrived to sort out the dismal state of human affairs. After years of American conflicts abroad, the progressive Left had finally found a leader to end our wars for oil. Here was a man who would finally inhibit the excesses of Wall Street greed that had driven the nation into the abyss of another depression. On top of all of that, Obama would dislodge the institutionalist’s candidate, moving Democrats past the Clintons forever and into a transcendent new era. He was their Ronald Reagan. Better, even.

Except it never happened. And these days, leading Democrats hardly ever mention the man, and when they do, it’s typically to grouse about something he’s either done or failed to do.

Not even poor old Joe Biden really listens to the Lightworker anymore. The New York Times reports that Obama had warned his vice president, “You don’t have to do this, Joe, you really don’t,” while taking “pains to cast his doubts about the campaign in personal terms.”

Some pundits have theorized that Obama is concerned that a gaffe-prone Biden might sully his legacy. But does anyone really believe that Obama, even if Biden was at the top of his game, would back the antiquated one-time Blue Dog Democrat over one of the fresh-faced quasi-socialists running for the presidency?

It’s true that if Biden wins, he would begin his first term at 78 years old. While age is almost surely a factor in some of his recent stumbles — time spares no man — Biden’s years in the Obama administration may have obscured the fact that he wasn’t blessed with much ability in the first place. His four-decade gaffe-filled career as a senator had already been dotted with gaffe-filled presidential candidacies. Long before Obama salvaged Biden’s career as a way to moderate his ticket, a young and vigorous Delaware senator had been plagiarizing speeches and bragging about his grandiose, but wholly imaginary, accomplishments. Like many politicians, Biden is a man who often confuses great luck with great talent.

In an effort to ingratiate himself to a contemporary progressive base, Biden has been forced to rapidly shed 45 years of policy positions on abortion, immigration, and crime. Let’s face it: Until recently, Biden never saw a prison he didn’t want to fill. Once the straight-talking, Amtrak-riding, working-class hero, he now had little choice but to tether his fortunes to a former president, even if there was no reciprocation. Biden is the only one defending the Obama record.

Why wouldn’t he? Obama still enjoys around a 60% approval rating in the public generally, and that number spikes to over 90% among Democrats. A recent Pew Research poll found that baby boomers now consider Obama to be the best president in the past 100 years. 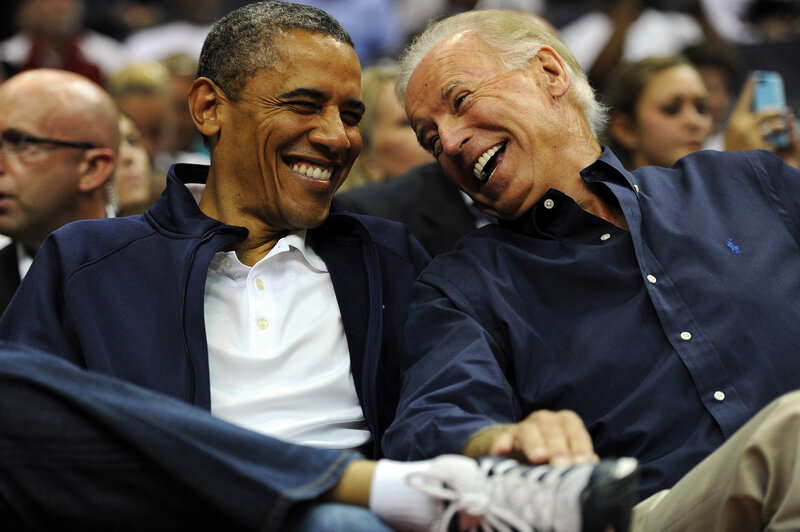 The thing is, while Obama has always been imbued with a unique ability to sell himself, he’s been abysmal at advocating for anyone or anything else. In his defense, it’s always easier to be passionate about something you truly love. And boy does Obama love himself.

You might remember that even as Obama was pulling off convincing electoral victories, the men and women selling his policy agenda were being tossed from their seats in droves. Over a thousand Democrats met this fate during the Obama years. The president would surrender the House, the Senate, and countless state houses during his term. Democrats are still sifting through the rubble.

“To my fellow Democrats. Be wary of attacking the Obama record,” Eric Holder, Obama’s one-time “wingman” attorney general, warned his party after Biden’s particularly brutal showing in the first round of the 2020 presidential debates. “Build on it. Expand it. But there is little to be gained, for you or the party, by attacking a very successful and still popular Democratic president.”

Popular, indeed. Holder’s placement of “very” in front of “successful,” though, feels more than a little desperate. I mean, how successful was Obama if Biden is the most notable manifestation of his legacy?

Holder had been irritated by the 2020 presidential hopefuls’ critiques of Obama’s record on immigration. Most of the broadsides against Biden were intended to weaken the front-runner. Then again, if Democrats are going to convince 2020 voters that President Trump’s deportation of illegal immigrants is another Kristallnacht, it’s going to be difficult to ignore the fact that Obama left the White House having deported far more illegal immigrants than any other president in history.

All Obama’s administration did was follow the law a bit more enthusiastically than its predecessors. We have to remember that Democrats were still feigning concern about unsecured borders and the rule of law back then. “If you cross the border illegally, you should be able to be sent back,” Biden reflexively pushed back during one debate, momentarily forgetting that this sort of rhetoric is frowned upon these days.

Perhaps even more problematic for the Obama legacy, however, is the Democrats’ increasingly dim view of the Affordable Care Act, Obama’s greatest and perhaps only genuine legislative accomplishment.

While the former president might have garnered international awards for fostering “cooperation between peoples,” he was a failure at advancing compromise with his fellow Americans. It cost him, even in victory.

Obamacare would be the first major national reform in modern history to be pushed through Congress without any real consensus, or even a single Republican vote, for that matter, and it would spark a conservative backlash that ended up paralyzing Washington for years.

D.C. paralysis can often translate into robust economic growth for the rest of the country, and when it did so, Obama was there to claim credit in ensuing years. Yet, the fallout effectively ended Obama’s legislative efforts two years into his presidency. And for what?

For the leftists who now dominate the Democratic Party, Obamacare had been, at best, a half-measure. They hadn’t even been able to slip a “public option” into the law. Obama had railed against the profit motive, and yet he empowered health-insurance swindlers to continue reaping rewards from their work. Keeping Obamacare would, as Kamala Harris argued, “allow insurance companies to remain with the status quo, doing business as usual, and that’s going to be about jacking up co-pays, jacking up deductibles.”

Change, not the status quo, had been Obama’s charge. Even as voters have warmed to the carcass of the ACA, which by now has been gutted by the courts, mismanagement, and Republican efforts, Democrats were turning against the legislation. Leading contenders such as Harris, Elizabeth Warren, and Bernie Sanders spoke of the healthcare law, which shaped eight years of national political discourse, as if it had been a complete waste of time.

Hell, even Obama, who had backed a single-payer plan before running for president in 2008, would talk about his baby as if it were a relic. “Democrats aren’t just running on good old ideas like a higher minimum wage,” the former president noted in a recent speech, “they’re running on good new ideas like ‘Medicare for all.’” Guess Obamacare didn’t fix things after all, and even its namesake won’t claim otherwise anymore.

If any other ex-president slagged his biggest legislative triumph, it might have been a big story. But Obama, as many conservatives had suspected, and most liberals journalists understood, was merely nudging policy in the right direction. “Obama was a technocrat disguised as a visionary,” George Packer once observed. But a more precise characterization is to say that Obama was a progressive visionary who was hamstrung by the workings of a democratic republic.

(And here is the big takeaway – the one the far-left media and academia still doesn’t want to openly admit:)

Despite all this, Obama always acted as if he was firmly entrenched on the high ground. The vulgarians have taken over these days, we’re told. It’s true that many saw a president who delivered thoughtful, uplifting words in that unique staccato, calling for “unity” and decency. Others saw the president abuse his power to, say, force devout Christians to buy abortifacients and contraception. Others still saw a man who hadn’t gone far enough. Whatever they saw, it’s evident now, even with the hagiographic treatment of Obama by media, that his presidency wasn’t a successful one — not for Democrats and not for the nation.

Barack Obama’s troubled lasting legacy is this – he weakened America’s standing abroad while dividing it terribly against itself here at home. Race/racism were not front-page issues in America because people didn’t give it much attention because they didn’t have to. Modern America is not a racist nation—it never has been.

Obama made race a front and center issue in nearly everything he did because it was his political crutch when his self-obsessed manner of governing was ever challenged. Soon, everything was “racist” everyone was a “victim” and every cause a “war.” America, under the preening guidance of Mr. Obama, became the equivalent of a perpetually tantrum-throwing child.

In comes President Trump who stares down these now reflexive (and false) cries of racism/victimization and calls them out for what they are—idiotic, immature, and weak-weak-weak.

And oh does the far-left media and D.C. swamp hate him for daring to tell them the truth regarding who they really are. 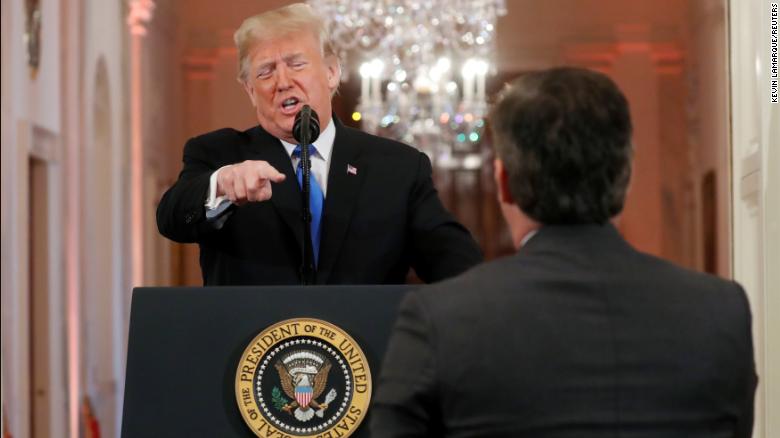