Does Ilhan Omar represent the Fifth Congressional District of Minnesota?  That’s her official job.  But buried in the back of her mind, ready to spring out in unguarded or stressful moments, seems to be the notion that her real country is Somalia.

Streiff of Red State notes that there is a pattern of her speaking of Somalia, which she left at about the age of 8, as her country, not the nation from which she draws a substantial salary and whose constitution she is sworn to protect.

Chris Berg on Twitter spotted a Freudian slip that Omar quickly caught, when she returned to MSP Airport last week, to be greeted by 100 or so cheering supporters.  The fact that she corrected herself is significant, indicating that she realizes that she must present a false front to her ostensible constituents in Minnesota.

LISTEN CLOSELY to @IlhanMN freudian slip here when she got back to MSP last night.
So does she identify as an American or a Somalian?
What say you? Plz share your Point of View 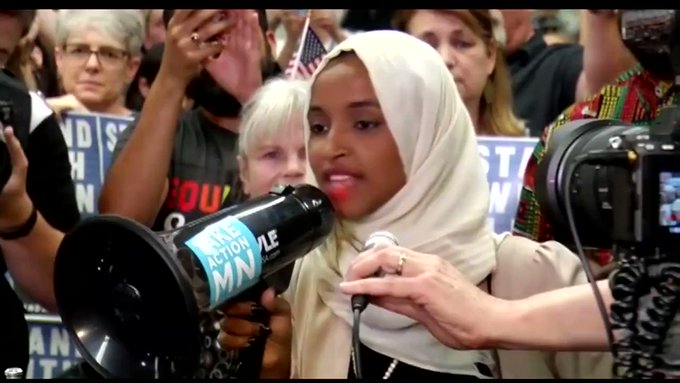 13.2K people are talking about this
And Streiff posts another example from 2015 in which, speaking to the “Revolution Somali Youth League,” she called Somalia “our nation.”

“You guys have the ability to impact where our nation is headed….”

3,278 people are talking about this

So, when President Trump tweeted about going back, perhaps he referred to the back of her mind.