When visiting Khurrum Wahid’s Facebook page, you see photos of what appears to be a clean-cut politician attending different events, posing with important politicos, standing with young people, and smiling broadly for the camera. Wahid is running for the position of City Commissioner of Coral Springs, Florida, and his Facebook page has been manufactured to show the perfect candidate for the public’s view. What is hidden behind this façade, though, is Wahid’s history – and present – of his involvement in radical Islam. It is this other side of Wahid that the voters need to recognize, so that they do not make a huge mistake come Election Day.

On June 18th, a ‘Special Election’ will be held for Coral Springs City Commission, Seat 2. The former Commissioner, Dan Daley, has left the seat vacant – following his win in a State House Special Election – and is heading to the Florida State Legislature, in Tallahassee. One of the individuals vying for his Commission seat is Khurrum Wahid. A February photo of Wahid, on his Facebook candidate page, has him posing with Daley and another recent candidate for Florida State House, Imtiaz Mohammad, who in December, slammed America and her citizens, saying “America [is] run on hate” and “American people are the most uneducated nation in the world.” Mohammad was part of a ‘host committee’ for a February fundraising event for Wahid.

Khurrum Basir Wahid is a Pakistani-born South Florida attorney, who has built his name on representing high profile terrorists. His past clients include: Rafiq Sabir, who received a 25-year prison sentence for conspiring to provide material support to al-Qaeda; al-Qaeda operative Ahmed Omar Abu Ali, who received a life sentence for plotting to assassinate President George W. Bush; Sami al-Arian, who sought to create a Palestinian Islamic Jihad (PIJ) infrastructure within the Tampa, Florida-area; and Miami imam Hafiz Khan, who was convicted of sending $50,000 to the Pakistani Taliban with the intent to murder American troops overseas.

Besides his controversial law practice, Wahid is the Co-Chairman of Emgage Action (formerly Emerge USA), an Islamist group he founded, in 2006, that attempts to pass its extremist agenda off as political advocacy. The group is part of the South Florida Muslim Federation, a consortium of South Florida’s radical Islamic organizations and terror-related mosques. Ammar Ahmed, the South Florida Director of Emgage, in February 2010, following a debate he participated in at a school, wrote on Facebook, “I hate white people” and joked that he “should have threatened to blow up the school.”

Emgage holds events at terror-linked mosques, like Tampa, Florida-based al-Qassam (a.k.a. Islamic Community of Tampa), which was founded by Sami al-Arian, and Pembroke Pines, Florida-based Darul Uloom, where “Dirty Bomber” Jose Padilla was a student; now-deceased al-Qaeda Commander Adnan el-Shukrijumah was a prayer leader; and current imam Shafayat Mohamed has claimed gay sex caused the 2004 Indonesian tsunami. As well, Emgage has sponsored speeches made by Islamic lecturer Sayed Ammar Nakshawani, who is a devotee of the deceased Ayatollah Ruhollah Khomeini and who has called for the destruction of Israel.

Prior to creating Emgage, Wahid served as a legal advisor for the national office of the Hamas-linked Council on American-Islamic Relations (CAIR) and a director of CAIR’s Florida chapter. Since its founding, in June 1994, CAIR has been associated with Hamas. CAIR was established as part of an umbrella group headed by then-global leader of Hamas, Mousa Abu Marzook, and CAIR has been cited by the US government for its involvement in the financing of Hamas.

The mosque Wahid attends is the Islamic Foundation of South Florida (IFSF). Wahid, as well, is the Registered Agent for IFSF’s corporation. On IFSF Youth Group leader Abdur Rahman al-Ghani’s Facebook page, al-Ghani labels Jews “demonic,” calls the US the “World’s Number One Terrorist Organization,” and says Muslims “will overtake the World.” 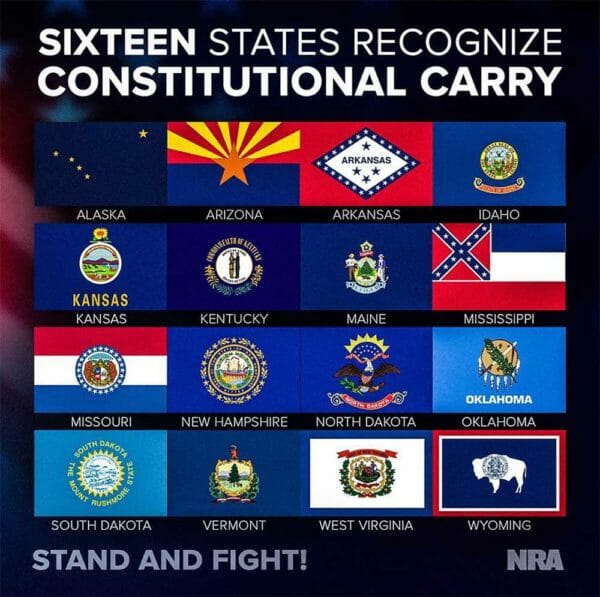 On Monday, 11 March 2019. Governor Matt Bevin of Kentucky restored Constitutional Carry to the State of Kentucky.

Bevin signed Senate Bill 150 into law Monday. It allows Kentuckians 21 and older who can lawfully possess a firearm to be able to conceal it without a permit.

Governor Bevin explained the law does not create a right, it only reaffirms the Constitution. From oann.com:

The governor emphasized the measure doesn’t grant the right to carry a gun, but instead he explained it reaffirms the constitution.

“This is a bill that recognizes as part of Kentucky law, once it is the law, once I have signed it, which I will, it recognizes the Second Amendment of the United States,” said Bevin. “That’s it, it doesn’t break new ground, it simply says that people do have the right to keep and bear arms.”

States started infringing on the Second Amendment when they restricted concealed carry after the Supreme Court ruled the Bill of Rights did not apply to the state governments in 1833.

In 1822, the Kentucky Supreme Court ruled that a ban on carrying concealed arms was unconstitutional under the Second Amendment and the Kentucky State Constitution in Bliss v. Commonwealth of Kentucky.

In Kentucky, a Constitutional amendment was deemed necessary to make the general carry of concealed weapons illegal. The Constitutional Amendment to allow the legislature to regulate the concealed carry of weapons passed in 1849,