NBC News’ Ken Dilanian reports that after two years of investigations, even Democrats are now agreeing: no collusion. A 21st-century take on Karl Marx and Friedrich Engels’ Communist Manifesto was introduced in the form of a nonbinding resolution introduced by Rep. Alexandria Ocasio-Cortez (D-N.Y.) and Sen. Ed Markey (D-Mass.). The resolution effectively does nothing other than express the sense that Congress should pass a so-called “Green New Deal” whose wholly unattainable goals would almost certainly wreak havoc on the economy and drive the United States further into debt.

The term “insane” understates how bad the ideas presented in this resolution really are. Both the Green New Deal resolution and the FAQ document released with it read like something concocted in a drunken haze in a college dorm room. Although it’s certainly imaginative, it’s not remotely close to serious public policy. Perhaps that explains why Rep. Ocasio-Cortez removed the documents from her congressional website.

Although the resolution isn’t a serious public policy proposal, conservatives and libertarians do need to take it seriously. Why? Because this is how far to the left the Democratic Party has drifted. Although some wave the banner of “democratic socialism,” others who share socialist ideals avoid the label that Rep. Ocasio-Cortez claims by identifying as “progressives” who support green policies. When one peels back the initial layer of green, the same tired and failed ideas of socialism are there.

The resolution begins with basic findings. Rep. Ocasio-Cortez and Sen. Markey take the most recent report from the United Nations’ International Panel on Climate Change (IPCC) as though it was handed down from God to Moses on Mount Sinai on stone tablets. Although humans do contribute to climate change, many of the IPCC’s previous claims have been proven wrong. Remember, it was just 2007 when the IPCC warned that the world had only eight years to avoid the worst effects of climate change. The most recent report, released in October 2018, claims that we have 12 years to avoid the worst of climate change. When proven inaccurate, just move the goalposts.

Eventually, Rep. Ocasio-Cortez and Sen. Markey offer a long list of things Congress should do in a so-called “Green New Deal.” The resolution is chock full of policy recommendations that radical environmentalists have long demanded. Rep. Ocasio-Cortez and Sen. Markey want the United States to “achieve net-zero greenhouse gas emissions” by eliminating fossil fuels. The Green New Deal FAQs document also states that the United States should also eliminate nuclear energy, although the resolution itself doesn’t include such language.

The goal of this aspect of the Green New Deal is to transition the economy to renewable energy. If that sounds too good to be true, that’s because it is. Under the Paris Agreement, from which the United States withdrew, Americans were expected to see $2.5 trillion in lost gross domestic product (GDP), the loss of some 400,000 jobs, and an increase in energy costs between 13 and 20 percent. On top of that, the U.S. has led the world in carbon emissions reduction since withdrawing from the agreement. The difference between the Paris Agreement and the Green New Deal is that the Paris Agreement, by comparison, wouldn’t have been nearly as economically destructive.

Americans have a love affair with their vehicles. But under the Green New Deal, that car you’re so proud of would be banned. Since the economy will transition away from fossil fuels, your gas-powered vehicle must be given up for an electric vehicle. Forget about the trade-in value; it’s not like the dealership can resell your old car.

Rep. Ocasio-Cortez and Sen. Markey would have Congress invest heavily in high-speed rail. Again, that may sound great, but high-speed rail has proven to be nothing short of a boondoggle in the United States. Take California’s high-speed rail system. This project is years behind schedule and far more expensive than originally projecting, now estimated to cost $100 billion. Although the Green New Deal promises to ensure that the power of eminent domain doesn’t abuse, Rep. Ocasio-Cortez and Sen. Markey fail to explain how they expect to protect private property while also building costly high-speed rail lines across the country, which would require land acquisition through eminent domain on a massive scale.

International travel would, presumably, become impossible. Those occasional steak dinners you enjoy might be a thing of the past, too. Although the resolution doesn’t explicitly say this, the Green New Deal FAQs document, no joke, states that the sponsors of the resolution “aren’t sure that we’ll be able to fully get rid of farting cows and airplanes that fast.” Cows, by the way, emit methane primarily through belching, not flatulence. Livestock represents nearly 3 percent of greenhouse gas emissions in the United States, according to the Environmental Protection Agency.

The Green New Deal resolution also includes other leftist policy priorities, such as guarantees of “high-quality health care,” “safe, affordable, and adequate housing,” and “economic security.” The resolution doesn’t explicitly state this, but the FAQs document states that the federal government will provide “economic security”  to those who are “unwilling to work.” This is socialism. If you’re completely able-bodied, but you’re too lazy to work, the producers in the economy — well, the few who are left under the Green New Deal — will pick up your tab. That’s not okay.

Finally, there’s the cost of this incoherent, ridiculous monstrosity. The Green New Deal resolution calls for heavy “investments” by the government, claiming that “World War II and the New Deal created the greatest middle class that the United States has ever seen.” Well, Rep. Ocasio-Cortez and Sen. Markey are very wrong about the New Deal. President Franklin D. Roosevelt’s Treasury secretary, Henry Morgenthau, Jr., told the House Ways and Means Committee in May 1939, “We have tried spending money. We are spending more than we have ever spent before and it does not work.”

In 2019, the Congressional Budget Office projects that federal spending will consume about 20.8 percent of GDP, or about $4.4 trillion. It appears that the sponsors of the resolution are suggesting that Congress more than double federal spending, pushing federal spending around $9 trillion to cover the cost of this unrealistic, incoherent, and absurd plan.

The Green New Deal has already drawn the support of several Democratic presidential hopefuls, including Sens. Cory Booker (D-N.J.), Kamala Harris (D-Calif.), Kirsten Gillibrand (D- N.Y.), and Elizabeth Warren (D-Mass.). After reading through the Green New Deal resolution and FAQs document, one has to wonder if these Democrats regret that decision.

by 1dragon
The Gateway Pundit
by Jim Hoft 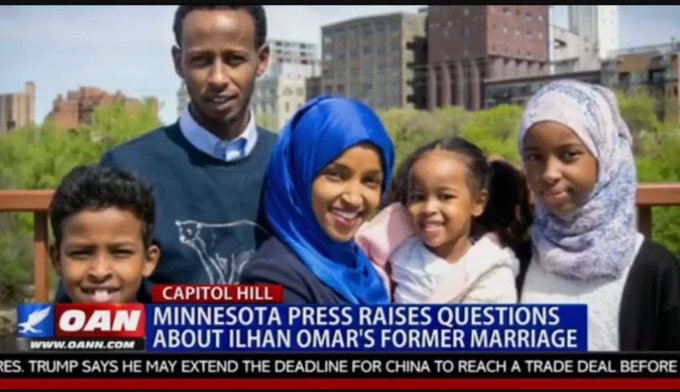 1,435 people are talking about this

Ilhan Omar built a vast coalition of East African voters to defeat the incumbent in Minneapolis.

The liberal media forgot to mention Ilhan was married to her brother.
Power Line reported:

A reader has written us to point out that the Somali website Somalispot posted information last week suggesting Omar’s involvement in marriage and immigration fraud. The post notes that Omar married Ahmed Hirsi in 2002. Hirsi is the father of Omar’s three children. Omar is depicted with Hirsi and their children on Omar’s campaign website here.

The post further notes that Omar married her brother Ahmed Nur Said Elmi in 2009, implying that the latter marriage assisted his entry into the United States. Her brother was a British citizen. “As soon as Ilhan Omar married him,” the post continues, “he started university at her [a]lma mater North Dakota State University where he graduated in 2012. Shortly thereafter, he moved to Minneapolis where he was living in a public housing complex and was later evicted. He then returned to the United Kingdom where he now lives.”

Ilhan Omar was elected to be a State Representative for District 60B November 8, 2016 and took her oath on the Quran. There are also proposals to give the military control of some public schools. Once Bolsonaro took office, the Ministry of Education issued new guidelines for textbook publishers that erased references to gender ideology and sexism. The ministry also eliminated its diversity department.

On the eve of his Jan. 1 inauguration, Bolsonaro tweeted his intentions. “One of the goals to get Brazil out of the worst positions in international education rankings is to combat the Marxist rubbish that has spread in educational institutions.” Education Minister Ricardo Velez Rodriguez vowed in his inaugural speech to end the “aggressive promotion of the gender ideology.”

In a poll published Jan. 8 by Datafolha, 59 percent of evangelical Christians said they did not approve of sex education being discussed at school. The poll, conducted Dec. 18-19, was based on 2,077 interviews. Conservative Catholics and evangelical Christians are a key supporters of the Bolsonaro government.

Bolsonaro is already feeling some pushback from Brazil’s teachers unions, who resent the president’s opposition to the legacy of leftist Paulo Freire, whose books and philosophy about education have been influential around the world. Freire, who died in 1997, was a founder of critical pedagogy. His work has been criticized for challenging traditional institutions, such as church and family, that intermediate between the state and individuals. Critical pedagogy asserts that teaching is inherently political and that the goal of education is political action and social critique.

During Bolsonaro’s presidential campaign last year, he said he wanted to go into “the Ministry of Education with a flamethrower to remove Paulo Freire.” As inspiration for reforming education, Bolsonaro appears to be relying on a U.S.-based Brazilian Olavo de Carvalho, who is known for opposing socialism.

In contrast to Freire, who was imprisoned briefly during a dictatorship in the 1970s, de Carvalho sees an educational benefit from religious and private schools. In a video on de Carvalho’s YouTube channel, he said, “The government does not have to educate anyone; it is the society that has to educate itself.” He added that he will fight to the death any proposals that the federal government is “the great educator.”

Education Minister Velez Rodriguez has said that not only schools but family and church are threatened by what he called a “crazy globalist wave.” Last week, he denounced his countrymen’s misbehavior while traveling outside of the country, telling Veja magazine, “Our kids and teenagers must receive citizenship education, which teaches how to act according to the law and morality.”

Velez told the newspaper Folha de S. Paulo that the Education Ministry is encouraging local officials to allow the police or military to operate their schools. Currently, the country has 13 schools run by the military that are intended for the children of soldiers. Military-run schools accepted some non-military children on the basis of merit, and have a reputation of being better than other public schools.

Brazil ranked 63rd of the 72 countries and regions in the 2015 Program for International Student Assessment, conducted by the Organization for Economic Cooperation and Development.

According to the group, Brazil has one of the largest shares of adults without secondary education. Schools are overcrowded, teacher salaries are low, and school buildings are often crumbling.

Caua dos Santos Borges, a 15-year-old public school student in Rio de Janeiro, said that in her experience teachers rarely spoke about politics in the classroom and gender had never felt like a core area of the curriculum.

“Once, a student asked the teacher if he supported Bolsonaro, but the teacher didn’t respond and changed the subject,” dos Santos Borges said.