On the September 18, 2018 Rachel Maddow show, Hillary warned us that Trump will “wholesale fire people” after the November 2018 elections.

Hillary, who “forgets” anything that contradicts truth and reality, must have forgotten that she fired the White House travel office so she could give the business to her pals. The White House memo that implicates her includes the following:

Mr. Watkins wrote that “we both know that there would be hell to pay if we failed to take swift and decisive action in conformity with the First Lady’s wishes.”

Hillary also “forgot” that during her co-presidency, she and Bill fired all 93 U.S. attorneys in one day.  Jeff Sessions was one of those fired by Janet Reno.

END_OF_DOCUMENT_TOKEN_TO_BE_REPLACED

Yet another group of migrants from a terrorist nation managed to infiltrate the United States through Mexico this week. Thankfully, the Border Patrol apprehended them, though it’s becoming a crisis largely ignored by the mainstream media. The men are from Bangladesh, a south Asian Islamic country that’s well known as a recruiting ground for terrorist groups such as the Islamic State of Iraq and Syria (ISIS) and Al-Qaeda Indian Subcontinent (AQIS). Earlier this year Judicial Watch reported on the epidemic of Bangladeshi nationals getting smuggled into the country via the porous southern border, especially through Texas, which is where this week’s group got nabbed.

The five men were walking near the Rio Grande when Border Patrol agents from the Laredo sector stopped them, according to a local media outlet. After questioning, federal agents confirmed the men are from Bangladesh and they were “processed accordingly.” The news brief reveals that the Laredo sector has apprehended 609 Bangladeshi nationals since the start of the fiscal year. Though already an alarming figure, it’s likely to grow until security along the southern border is adequate. In fact, the numbers have already increased dramatically in the short time since Judicial Watch reported on the crisis of Bangladeshi nationals entering through Mexico in May. At the time, the Laredo sector had recorded 209 Bangladeshi nationals apprehended at the border during the fiscal year. In a press release Customs and Border Protection (CBP) confirmed that “the Laredo Sector Border Patrol continues to have the highest apprehension of Bangladeshi Nationals compared to other Border Patrol Sectors.”

This is not to be taken lightly. Back in 2016 the State Department warned of a “significant increase in terrorist activity” in Bangladesh, most notably carried out by ISIS and AQIS. That year ISIS claimed responsibility for 18 attacks in Bangladesh, including a July 1 attack on a restaurant in Dhaka’s diplomatic enclave, which killed 22 people. The terrorists spared hostages who could demonstrate that they were Muslim by reciting verses from the Koran, according to the State Department. “The other attacks were generally machete attacks on individuals from minority groups or law enforcement entities,” the agency said. Earlier this year the Treasury Office of Foreign Asset Control (OFAC) added ISIS-Bangladesh to its sanctions list by inserting the group in the government’s growing Counter Terrorism Designations list. It is part of a broader government plan to defeat ISIS by, among other things, denying access to the U.S. financial system.

A multitude of news and academic reports have also documented the growing terrorism threat in Bangladesh. The country has a large amount of Islamist violence, according to a report published by the Combating Terrorism Center at West Point, and is plagued by illicit financial transfers typically used by terrorist groups. “It is suspected that militants regularly tap into these illegal money flows to fund their operations,” the report states. “More than $1 billion in taxable goods is smuggled into the country from India, and analysts believe that some of this money ends up in the hands of terrorist groups. This is also the case with small arms sales, drugs and counterfeit U.S. dollars that enter Bangladesh from neighboring Myanmar and the Golden Triangle.” Last year a Bangladeshi man (Akayed Ullah) in the U.S. with a chain migration family visa tried to detonate a pipe bomb in a crowded New York subway corridor.

Besides Bangladesh, a growing number of illegal aliens from terrorist nations—including Pakistan and Afghanistan—have tried to enter the U.S. through Mexico in the last few years. In 2015 Judicial Watch reported that dozens of them were held in a Texas Immigration and Customs Enforcement (ICE) processing center after coming to the U.S. illegally through Mexico. One of the detainees who is a national of Bangladesh said he arrived in El Paso after traveling from South American to Juarez, Mexico. At the time, the U.S. had just issued a terrorism alert warning that militants in Bangladesh may be targeting westerners. Years ago, Judicial Watch also reported that Mexican drug cartels are smuggling foreigners from countries with terrorist links into a small Texas rural town near El Paso. The foreigners are classified as Special Interest Aliens (SIA) by the U.S. government.

Ruh Roh…hope the statute of limitations does not apply here.

When Clinton was running for president in 2008, she had a private server installed at her home in Chappaqua, New York. The domains clintonemail.com, wjcoffice.com, and presidentclinton.com, which were registered to a man named Eric Hoteham, all pointed to that server. In 2013, a Denver-based IT company called Platte River Networks was hired to manage the server, but wasn’t cleared to work with classified information. The company executives received death threats for taking on the contract. It was later discovered that multiple private servers were used for Clinton’s email.

Clinton used a BlackBerry phone to communicate during her tenure as secretary of state, including sending and receiving emails through her private server in New York. The State Department expressed concern about the security of the device. Clinton had requested the NSA provide a strengthened BlackBerry, similar to the one used by President Obama. But, her request was denied. Instead, the NSA requested that Clinton use a secure Windows Phone known as the Sectera Edge, but she opted to continue using her personal BlackBerry. 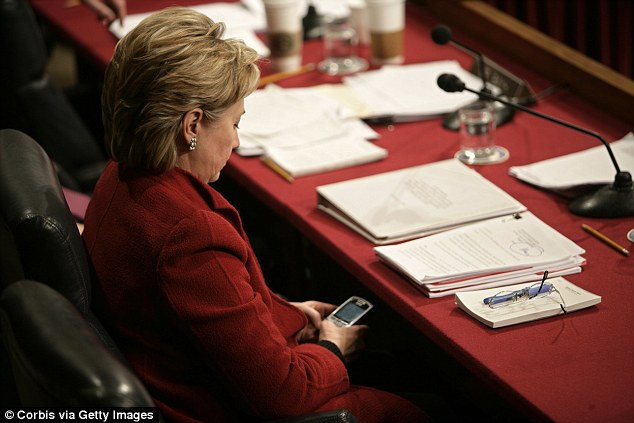 The classified material Hillary Clinton sent and received using an unsecure, private email server included correspondence with foreign leaders, according to documents obtained from the State Department by a government watchdog group.

Judicial Watch, which has called on Attorney General Jeff Sessions to order “an honest criminal investigation” of Clinton’s email practices while she was secretary of state, now awaits a federal judge’s Sept. 28 deadline for the State Department to finish sorting through the emails.

Comey, apparently without consulting then-Attorney General Loretta Lynch, told reporters in July 2016 that Clinton was careless in using her private email account for official business and transmitted classified information, but did not commit prosecutable offenses. President Donald Trump, who defeated Clinton in the November 2016 election, fired Comey in May 2017.

The FBI had uncovered 72,000 documents as part of its 2016 investigation into Clinton’s use of the private email server while serving as secretary of state under President Barack Obama from Jan. 21, 2009, to Jan. 31, 2013.

Judicial Watch, a Washington-based nonprofit that describes itself as promoting “integrity, transparency, and accountability in government,” last month released two new batches of Clinton emails (here and here) that it pried loose from the State Department.

Besides five instances of classified materials, the group said, the newly released Clinton emails contain messages about a meeting with billionaire financier George Soros and a memo to Clinton about a foreign government from a former top aide to her husband when he was president.

It is not clear whether State will meet that deadline.

In its FOIA request filed initially in March 2015, Judicial Watch sought all emails sent or received by Clinton in her official capacity as secretary of state, “as well as all emails by other State Department employees to Secretary Clinton regarding her non-‘state.gov’ email address.”

The tens of thousands of Clinton emails include messages sent to her by a longtime aide, Huma Abedin. The FBI found emails from Abedin on the laptop of her estranged husband, former Rep. Anthony Weiner, D-N.Y., prompting Comey to briefly reopen the FBI probe days before the election on Nov. 8, 2016.

One chain of emails from Abedin, with the subject “Invites for the week,” refers to a two-hour meeting in Southampton, New York, with Soros, founder and chairman of Open Society Foundations, a New York-based international institution known for financing progressive political causes.

The emails referring to Soros do not include dates, but Judicial Watch investigators deduced they were written before November 2011, and perhaps as long ago as early 2009, based on individuals involved in the exchange and the timing of certain events. It is not clear whether the meeting took place.

Five messages in the just-released batch of Clinton emails include classified material, according to Judicial Watch.

For example, on June 7, 2011, Clinton received classified information on her unsecure email account from former British Prime Minister Tony Blair with regard to Blair’s Middle East negotiations with Israel, the Palestinians, and the French. Blair also forwarded the information to Jack Sullivan, who was Clinton’s deputy chief of staff.

On Jan. 26, 2010, Sullivan sent classified information through his own unsecure BlackBerry to Abedin’s State Department email address, information that he previously sent to Clinton’s and Abedin’s unsecure @clintonemail.com accounts.

The email, classified as confidential, concerned negotiations between the United Kingdom and Northern Ireland and included a “call sheet” Clinton received before making a call to political leaders in Northern Ireland.

Redacted portions appear to have contained the names of members of the left-wing Irish political party Sinn Fein, according to Judicial Watch. The Sinn Fein members had been invited to a meeting, but its purpose is not clear.

Northern Ireland was also the subject of a June 13, 2009, email from Sullivan to Clinton that was classified as confidential and almost entirely redacted by the State Department.

As previously reported, Clinton also received emails from Sid Blumenthal, a confidant and former senior adviser to President Bill Clinton, her husband. The Obama administration had barred Blumenthal from serving in the State Department under Clinton.

Yet the email messages obtained by Judicial Watch show that Blumenthal advised Hillary Clinton on government policy. In an April 8, 2010, memo that included information classified as confidential, for example, Blumenthal encouraged her to develop relations with the new government in Kyrgyzstan.