Flopping Aces
By John Velisek
CIA officials, including the upper echelons, are required to be apolitical.  The main purpose of the CIA is to gather intelligence on America’s enemies and guarantee the safety and security of the citizens of this country. The administration of CIA chief John Brennan came nowhere near meeting this standard. Brennan used the CIA to lies for political ideological goals. This has been shown earlier when Brennan used the CIA to conduct illegal surveillance of the Senate Intelligence Committee and then lied about it. This the same investigations that Brennan lied to Senator Feinstein about, and Brennan later apologized to the leaders of the SIC.

This the same Brennan who coerced the FBI into investigating this sham of Trump-Russia collusion using the unverified Steele dossier. In Brennan’s own words “Just because it is unverified doesn’t mean it isn’t true. A sad idea pushed by a biased has been that was trying to hold on to his job through a Hillary administration. Lying to the Security Intelligence Committee as stated above, it is now known that it was Brennan who passed on and spoke of the Steele dossier to Harry Reid and other Democrat leaders, fed allegations that remain unverified to the FBI and fed information detrimental to President Trump to the press.

This is the same Brennan that lied about NSA surveillance of American citizens and only avoided a perjury trial because he resigned, and the statute of limitations ran out because of obfuscation from the Obama administration. Brennan even had the audacity to proclaim he just gave the “least untruthful answer”. For anyone else, a lie like this would land them in jail. But the Obama administration and the sycophantic media ignored this crime, once again.

The administration of the CIA under the orders of Brennan operated as an offshoot of the Hillary campaign. Using spies and connections in England and Estonia, Brennan weaponized the CIA with the phony intelligence obtained through these sources in his attempt to delegitimize the Trump candidacy, to try and cause maximum political damage on the conservatives, and led a multiagency smear campaign that has led the government to end up in a sham of a Special Council investigation being used by the leftists to affect the midterms.

It was John Brennan who proudly admitted voting for Communist Party leader Gus Hall, and even know supports such fellow progressive socialists as Andrew McCabe, James Comey, and his partner in crime at the highest level, James Clapper. This is the same John Brennan who invited a plethora of communist subversives into the highest positions of the CIA. Brennan talks of corruption in the Trump presidency, but fails to mention and will not discuss the political corruption of the “Resistance” which he helped to get started and continues to push lies, innuendo, and double talk. To those like Brennan, even those still in government, the thought of legality is second to the thought that the ends justify the means in the ideology of leftist thought. They have yet to understand the juvenile antics of those in government and the media are not making a difference, The only difference is the #WalkAway movement which they claim are Russian bots but are actually millions of honest Americans who are tired of the lies.

In March of 2016 The Moscow Times reported the John Brennan, still, head of the CIA made a secret visit to Moscow. At the time he met with the FSS the successor of the KGB, of which the man being demonized by Brennan, Vladimir Putin was a part.

It was in the summer of 2016 when British spy Robert Hannigan passed material to John Brennan. Brennan then passed this information to the progressives socialists on Capitol Hill. After beefing the “Gang of Eight” this same information was then passed to the New York Times, which dutifully emblazoned the front pages of their liberal rag with this information.

One of the main reasons for Brennan’s animus towards President Trump was his sympathies towards the Muslim Brotherhood and his college days were spent a year in Cairo learning about the Muslim sharia law and high-end courses in Middle East Studies. He applied for and received the station chief position in Riyadh, Saudi Arabia.

His background and sympathies for the Muslim outlook was also a primary reason for the intense dislike he felt for Michael Flynn. It was Brennan who instigated the investigation of Michael Flynn after he had already been cleared by the FBI. It was Brennan who released the confidential transcripts of Flynn’s conversations with the Russian ambassador and made sure the press, long in Brennan’s pockets because of earlier leaks, to spread the supposed lies to Mike Pence by Flynn.

The latest unhinged tirade from this Muslim/socialist sympathizer is laughable. This self-important narcissist now claims “America will triumph over you…”

Brennan also sent an aggressive threatening tweet to both Paul Ryan and Senate Majority Leader Mitch McConnell claiming they will bear the “responsibility of the harm done to our democracy is President Trump does not stop his disastrous path”. First, we are a Republic, not a democracy, a difference any competent CIA Director would understand. Second, the path President Trump is following, less government control, lower taxes, and border security, is the one the majority of Americans back and understand. His tweet pertained to the definitive proof that the FBI had an informant in the Trump campaign.

Perhaps this man needs to go back to American History in about the sixth grade. President Trump was elected by the people of this country contrary to what Brennan, Clapper, and all the others ensconced in the Deep State believe. He had already called for the executives in the Trump administration to refuse the orders of the President if they didn’t agree with the order. There is no doubt that Brennan and the others will continue to move forward in the adolescent ranting of impeachment and a coup to lead to civil war. It is all they have. They couldn’t beat Trump, they can’t turn his supporters (a group growing every day) against him, and no one listens to their lapdogs in the media anymore.

There is so much more to this web that Brennan has achieved. Passing the information to Harry Reid, who then wrote an open letter to James Comey which also happened to end up with the New York Times filled with lies and unverified innuendo. Or other agents and intelligence officials who were invested in a Clinton victory like former deputy of the CIA Mike Morell.

30 years CIA field operations officer Gene Coyle said the “Brennan is known as the greatest sycophants in the history of the CIA and a big supporter of Hillary Clinton. What has not been made clear if the John Brennan, along with a multitude of others are no longer part of any governmental decision process, and as such should have the clearances they are still using to leak to the press dismissed?

Thinking they are our betters, they understand that the media and those still in place will do the best they can to protect them. Drawing out the Mueller sham of an investigation until after the midterms will allow the progressive socialists to shut down the investigations in Congress. Then the Stalinist “show trials and investigations will begin. The impeachment process based on the banshee caterwaulings of Mad Mouthy Maxine Waters will move forward if these slimy animals are allowed to take over Congress. 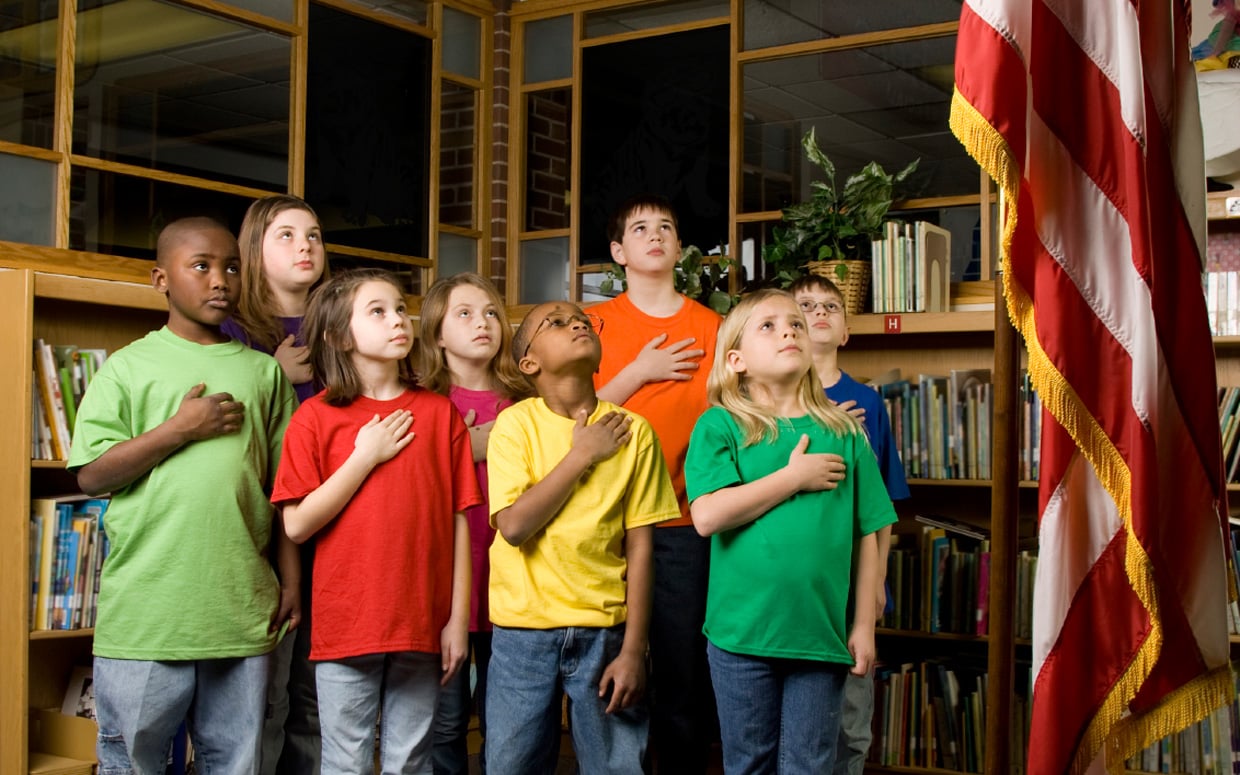 An Atlanta elementary school announced that students will no longer have to say the Pledge of Allegiance during morning meetings, and will instead recite a ‘Wolf Pack Chant’.

Lara Zelski, the principal of Atlanta Neighborhood Charter School, said in a press release on Tuesday that it has become ‘increasingly obvious’ over the past years that more and more of the school community were not standing or reciting the pledge.

‘Students will continue to lead the meeting by asking our community to stand to participate in our wolf pack chant together,’ the school said.

Zelski said students who wish to recite the pledge can do so at another point during the school day in their classroom.

‘This decision was made in an effort to begin our day as a fully inclusive and connected community,’ she said. ‘There are many emotions around (the pledge) and we want everyone in our school family to start their day in a positive manner.’

School officials said teachers and a K-5 leadership team will work with students over the next few months to create a school pledge everyone can say in the morning.

‘This pledge will focus on students’ civic responsibility to their school family, community, country and our global society,’ Zelski said.