I like to wait for the dust to clear before opining on events.  Not everyone does. The bodies of the victims of the Parkland shooting weren’t cold before democrats clawed their way to the front of TV cameras. A nice touch. Of course, obama had to be heard.

Left wing news outlets leaped at the report that Cruz was a member of a white nationalist group.

Just one problem. He is not a member of the Republic of Florida.

Leon County law enforcement sources told the Tallahassee Democrat that they could not find information linking Cruz, 19, to the Republic of Florida Militia, as claimed by the group’s self-proclaimed leader Jordan Jereb.

His comments to the Anti-Defamation League and The Associated Press set off a media firestorm Thursday at about midday that Cruz was connected to the alt-right, white nationalist group.

“We are still doing some work but we have no known ties between the ROF, Jordan Jereb or the Broward shooter,” Jordan said.

(Why would a white supremacist kill so many white people?)

The media was pranked and swallowed it whole.

The “leader” of the group, Jordan Jereb, explained it this way. 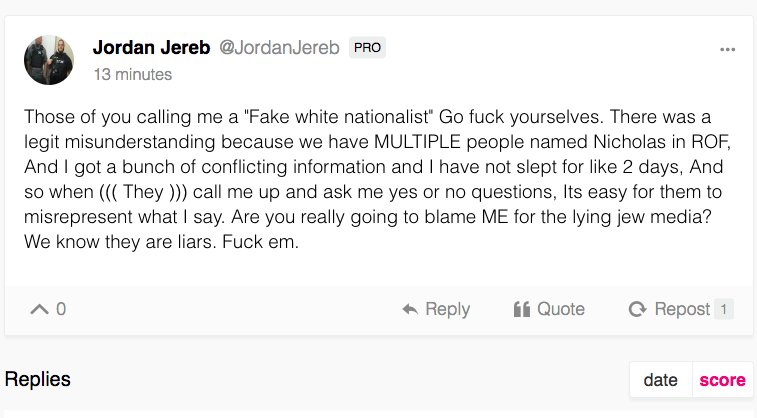 ABC News: There have already been 18 school shootings in the US this year: Everytown

WaPo: No, there haven’t.

What is true is that the FBI was tipped off about Cruz last year.

PARKLAND, Fla. (Reuters) – The Federal Bureau of Investigation was warned in September about an ominous online comment by the 19-year-old man accused of killing 17 people at his former high school but was unable to locate him, an agent said on Thursday.Authorities said the ex-student, identified as Nikolas Cruz, walked into the Marjory Stoneman Douglas High School in Parkland, near Miami, on Wednesday and opened fire with an AR-15-style assault rifle in the second-deadliest shooting at a public school in U.S. history.

Unable to locate him? He was all over Instagram:

The other Stephen Miller tells us why:

For the record, have a look at what the Republic of Florida is all about: This sounds a lot more like Bernie Sanders than it does Sean Hannity.

And of course, the left blamed Trump.

The radical Islamic scholar that Hillary Clinton let back into the U.S. after a lengthy ban over terrorist ties is in jail on rape charges. This week a judge in France denied bail for Clinton’s pal, Tariq Ramadan, the grandson of Muslim Brotherhood founder and Hamas funder Hassan al Banna. Ramadan, a professor at Oxford University, was arrested in Paris last week and charged with raping two Muslim women. Both women were raped in France, according to a European news report. The first one, a 40-year-old disabled Muslim convert claims Ramadan raped and beat her in the southeastern city of Lyon in 2009 and the other, a 41-year-old feminist activist, says Ramadan raped her in Paris in 2012.

A respected Swiss newspaper, Tribune de Genève, has also reported that Ramadan seduced and had sexual relations with teenage girls at a Geneva school where he once taught. The women say Ramadan told them they were special before having sex with them in the back of his car. One of the women was 14 at the time and the others were 15 to 18 years old. They say Ramadan used his authority as their teacher to seduce them. Oxford University placed Ramadan on a leave of absence after the rape allegations surfaced as well as other accusations of assault and sexual harassment. “Professor Ramadan’s teaching, supervising and examining duties will be reassigned, and he will not be present at the University or College,” reads a statement issued by Oxford in early November. “The University has consistently acknowledged the gravity of the allegations against Professor Ramadan, while emphasising the importance of fairness and the principles of justice and due process.”

As Barack Obama’s Secretary of State Clinton, a self-proclaimed women’s rights activist (her Hillary for America policy included confronting violence against women and has a section on sexual assault) went to bat for Ramadan. As part of an Obama administration effort to pursue a better relationship with Muslim communities, Clinton signed special orders to allow the reentry of two radical Islamic academics whose terrorist ties had for years banned them from the United States. One of them was Ramadan. As the nation’s chief foreign affairs adviser, Clinton exercised her exemption authority to allow Ramadan and South African sociologist Adam Habib, a critic of U.S. foreign policy in the Middle East, back into the country. The State Department had repeatedly denied their visa claiming the men present a national security threat.

Ramadan, one of the European Muslim world’s most prominent scholars, was the better known of the two. He openly supports the Palestinian terrorist group Hamas, has worked for Iran and donates money to terrorist causes. His grandfather founded the Muslim Brotherhood, an influential Islamist group that advocates terrorism against Israel and the west and is known as the parent organization of Hamas and Al Qaeda. A few months before Clinton approved his U.S. visa, a Dutch university fired Ramadan over his extremism and his work for the Islamic Republic of Iran. The move capped the beloved Muslim professor’s assessment that London subway bombers were justified in acting out against their oppressors because the “British government is helping Iraqi people to be killed.” A well-known French author who has studied Ramadan extensively said the scholar is undoubtedly an agent of radicalization.

Clinton’s special waiver allowed Ramadan to visit four American cities after being banned from the U.S. for six years. He arrived in New York for a tour that included New Jersey, Chicago, Detroit and Washington. Permitting the controversial scholar to enter the U.S. was part of a broader government mission to create a new and improved relationship-based on mutual interest and mutual respect-with Muslims around the world.