Something profound is happening throughout Iran, and the Western mass media are just not reporting it.

For some time now, protests by ordinary Iranians have become a daily routine.  These protesters include workers who have not been paid wages or have become redundant; savers who have lost their savings in Iran’s many quasi-banks, which are infested with corruption and embezzlement; people concerned about the environmental disaster Iran is fast becoming; people protesting rising prices; retired pensioners whose retirement funds have been plundered by successive administrations; and low-income people who can no longer make ends meet.

These protesters are across the spectrum of Iranian society.  The protests are getting larger, and their chants are becoming more radical.

In the early days of the 1979 revolution, which swept the mullahs to power in Iran, the protests were far less frequent, with far fewer protesters in isolated religious cities, ignored by the mainstream population of Iran.  Yet the Western mass media never missed an opportunity to report on the smallest and the most insignificant of those early protests, creating a hype that eventually gained momentum.

Thankfully, today, we do not have to rely on the politically biased Western correspondents based in Iran, who seem too scared to upset the Islamic Republic authorities and report on anything other than the good cop, bad cop scenarios of “moderates” against “hardliners.”  Today, we have social media.  Every citizen is a potential reporter with a camera, and news travels faster than the foreign correspondents and “echo chambers” can say “moderates in Iran.”

In recent weeks, the protesters have been chanting more radical slogans: “Death to Rouhani,” “Down with dictatorship,” and chants that express their yearning for the happier days before the 1979 revolution.

Iranian pensioners, who were protesting against their dwindling pensions, chanted in Isfahan, “What a mistake we made by taking part in the revolution.”  On Thursday, protesters in the holy city of Mashad chanted, “Reza Shah, bless your soul,” referring to the founder of the Pahlavi dynasty, Reza Shah the Great, the modernizer of Iran and the nemesis of the Shia clerics in Iran. 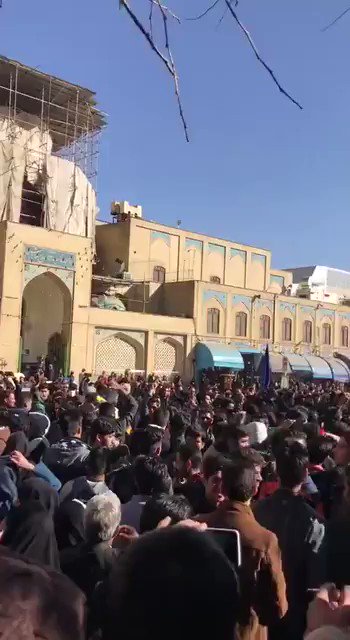 Protesters in Iran chant “Reza Shah, Bless Your Soul” – referring to Reza Shah the Great, the founder of the Pahlavi dynasty, the nemesis of the clerics, the moderniser of #Iran

The protesters are also chanting against the judiciary, whose corruption and abuse of power have made it the most unpopular institution in the Islamic Republic – and that takes some doing.

Videos on social media clearly show that society is vehemently tense.  The population is angry and has had enough.  Most important of all, the people are not scared anymore.  They openly mock the security forces, and they are finding strength in their numbers.

On top of these protests, there is the new phenomenon of Restart, begun by a former popular game show host on Iranian State TV, Seyed Mohamad Hosseini, now in exile in America.  The former host called for everything that represents the regime to be attacked, be it a mosque, a Baseej base, or a police station, and that protesters use anything they can get hold of – a sledgehammer, an ax, a Molotov cocktail – to restart the country Iran was before it became an Islamic republic.

Followers of Hosseini film themselves carrying out the attacks and finish by saying, “Long live Restart, and long live Hosseini.”  The first such video was an attack on a mosque during the holy month of Moharram, an unthinkable act in Iran before Ayatollah Khomeini took over.  Yet such is the hatred the clerics have created among Iran’s youth toward Islam that even a mosque in a holy month is not safe from being set on fire.  Restart videos posted on the social media are no longer isolated attacks; they are happening more and more throughout Iran.

It is not the first time the nascent days of a revolution pass by unnoticed by the “experts,” think-tanks, diplomats, reporters, and the rest.  Almost every revolution takes these people by surprise.  One of my favorite such cases is the example of the U.S. embassy in Budapest, who cabled one month before the 1956 Hungarian uprising, “There is no chance of an uprising here.”

Whether the current dissatisfaction by the Iranian population will snowball to a full-blown revolution and whether the regime still has the stamina and the capability to crack down on protesters remain to be seen, but the increasing frequency of protests and the growing radicalization therein certainly deserve more coverage in the media – at least as much as those early isolated small protests that led to the 1979 Islamic revolution in Iran.

One thought on “Western media are ignoring a revolution in Iran”