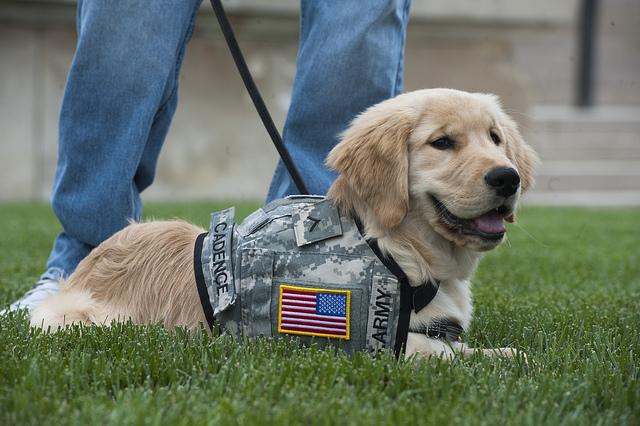 A program that prepares service dogs for permanent placement with wounded veterans and their families has been booted from Fort Belvoir and Walter Reed without explanation, the program’s executive director says.

GERMANTOWN, Md. — The Warrior Canine Connection, a program that uses an army of volunteer puppy raisers, dog trainers and veterans to prepare service dogs for wounded veterans and their families, has been partnering with military facilities in the D.C. region since 2009.

But suddenly — and without explanation — that came to a stop, says Warrior Canine Connection Executive Director Rick Yount.

He said his trainers and puppy raisers at Fort Belvoir and at two locations on the campus of the Walter Reed National Military Medical Center, were told on Oct. 27th to vacate their offices that afternoon.

“At two o’clock in the afternoon, I received a phone call saying there was a stop work order. There was no explanation whatsoever as to why that was the decision,” Yount said.

Asked if there had been an issue with the program, problems with staff or an incident at either of the military sites, Yount said he hasn’t heard anything.

“We’re trying to get answers. Why would — all of the sudden — a program be halted that was serving patients?” Yount asked.

If a dog had bitten someone or if there had been an incident, he said he could understand why there would be concerns about the program or even an interruption in the activities that his staffers and volunteers provide. “We’ve heard absolutely nothing” he said.

Warrior Canine Connection had two offices at the Bethesda campus, one at the National Intrepid Center of Excellence and one at Building 11. Public affairs officials at both facilities have been contacted. Jimmie Cummings at Fort Belvoir said he was trying to track down information on the contract, which Yount said was not set to expire until 2019.

The Warrior Canine Connection training model has volunteers visit with young puppies to socialize them when they are just weeks old. Then the training begins. Volunteer puppy raisers get training on how to handle the dogs at Fort Belvoir and Walter Reed. Veterans have been taking an active part in the training so that eventually the dogs that “graduate” the program can be placed for a life of service alongside a wounded warrior.

Some veterans told him that knowing they’d be visited by the dogs and training with them gave them a reason to get out of bed in the morning.

“There’s no question that this program saves lives” he said, cradling a future service dog “Lou” in his arms.

by 1dragon
Sultan Knish
by Daniel Greenfield
Vicente Adolfo Solano declared in Spanish, standing in front an ISIS flag. “In the name of Allah and our leader, Abu, we are going to defeat you.”

Solano, a 53-year-old Honduran living in Miami, seemed like an unlikely candidate to join ISIS.

But there he is on video lashing out at President Trump. Solano was resentful over his “temporary immigration status”. Hondurans living in the United States had been automatically converted to “refugees” after Hurricane Mitch in 1999. Temporary Protected Status for the eighteen year hurricane refugees expires in Jan 2018. And President Trump appears unwilling to extend it any further.

Even if Solano was here under TPS, he should still have been deported due to his criminal record. But instead he remained here, and was so furious at the country that had taken him in that he joined ISIS.

END_OF_DOCUMENT_TOKEN_TO_BE_REPLACED

How do they do it? I am not the first to compare the Clintons to Harry Houdini, the great magician and escape artist, but Bill and Hillary make him look like a rank amateur.

No law seems to touch them. No regulation seems to control them. No prosecutor wants to take the risk of holding either Clinton accountable for anything. OK, Bill was impeached by a Republican House, but not convicted in the Senate.