After 8 years of Obama’s lies and failures leading to genocide.

Last week Secretary of State Rex Tillerson announced that ISIS’s “fraudulent caliphate in Iraq and Syria is on the brink of being completely extinguished,” and credited “an aggressive new strategy led by the president.” President Trump trusted his military to carry out a robust strategy to quickly eliminate ISIS’s control of territories from which it could plan and direct terrorist attacks worldwide. As Defense Secretary Jim Mattis explained last May, “First, he delegated authority to the right level to aggressively and in a timely manner move against enemy vulnerabilities. Secondly, he directed a tactical shift from shoving ISIS out of safe locations in an attrition fight to surrounding the enemy in their strongholds so we can annihilate ISIS.”

Former President Barack Obama had allowed the ISIS cancer to metastasize in the first place, leading to the killing, maiming, kidnapping and sexual enslavement of many thousands of innocent men, women and children. That is because Obama initially considered ISIS a “J.V. team” and then failed to prosecute a meaningful counter-strategy to quickly eliminate the ISIS scourge before its killing machine could become a regional and then a global threat. There has been huge slaughter and a global security threat unleashed thanks to Obama’s handling of ISIS, and the reverse of that trend under President Trump.

When Obama left office in January 2017, after years of ISIS expansion and atrocities, the ISIS threat was finally beginning to recede in his slow war of attrition. However, ISIS still held on to significant territories in Iraq and Syria. While Obama slow rolled the fight against ISIS under overly restrictive rules of engagement that centralized tactical decision-making in the White House, President Trump has taken the gloves off. As commander-in-chief, he set the overall strategy and trusted his military to carry out their battle plans in the field with minimum interference and second-guessing. As a result, ISIS is finally on the run. ISIS territory has been reclaimed at a faster rate under President Trump than under Obama, with nearly a third of the territory taken by ISIS in Iraq and Syria since 2014 recovered during the first six months of the Trump administration. ISIS is on the verge of losing any remnant of control it has clung to in Raqqa, its de facto capital in Syria, since being largely routed from there last month. Earlier this month, ISIS lost control of its last major urban stronghold in Iraq, Hawija. Monthly revenue for ISIS in Iraq and Syria dropped about 49 percent from the third quarter of 2016 to the second quarter of 2017.

In Syria, where the six-year-old civil war has claimed about 500,000 lives, civilian deaths decreased during the first half of 2017 as compared to the same period in 2016 — from 6567 to 5381, according to the Syrian Network for Human Rights. In June 2016, 1271 civilians were killed as compared to 848 civilians in June 2017. Thus, as the Trump administration was fighting ISIS more aggressively, while at the same time punishing the Syrian regime for its chemical attack in contrast to the Obama administration’s passivity, civilian deaths in Syria were actually dropping.

ISIS’s rise all started when, against military advice, Obama precipitously removed all U.S. combat troops from Iraq in 2011, creating a vacuum which allowed the defeated remnants of al Qaeda in Iraq to regroup and morph by 2014 into the self-declared caliphate of the Islamic State (i.e., ISIS). Obama did nothing as ISIS expanded its tentacles in Iraq and Syria. The same month in 2014 that ISIS seized Falluja, a city in Anbar Province, Iraq, and parts of Ramadi, the province’s capital, is when Obama dismissed ISIS as akin to a “J.V. team.” By that time, ISIS had controlled “more than 34,000 square miles in Syria and Iraq, from the Mediterranean coast to south of Baghdad,” according to figures cited by CNN.

In June 2014, ISIS took over the northern Iraqi city of Mosul. Finally, Obama began to take notice and ordered limited air strikes against ISIS, initially in Iraq and then in Syria. He said the goal was to work with a global coalition to “degrade and ultimately destroy” the militants. However, a year later, at a news conference held on June 8, 2015 following a G-7 summit meeting in Germany, Obama admitted that “we don’t have, yet, a complete strategy” to confront the threat posed by ISIS. 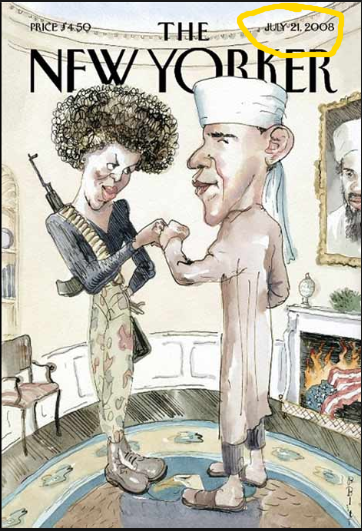 Moreover, Obama continued to deny that ISIS fighters were inspired by their Islamist ideology. At a prayer breakfast in February 2015, Obama sought to deflect attention from ISIS’s religiously motivated atrocities by referring to the centuries old Crusades and the Inquisition. “And lest we get on our high horse and think this is unique to some other place,” Obama said, “remember that during the Crusades and the Inquisition, people committed terrible deeds in the name of Christ. There is a tendency in us, a sinful tendency, that can pervert and distort our faith.”

. Instead of castigating Christians for long ago events and engaging in moral relativism, Obama should have spent his time and attention devising an effective strategy to combat the genocide against Christians and other religious minorities inflicted in the name of Islam during his watch. Yet he could not even bring himself to utter the words “Islamic terrorism.”

While Obama fiddled, the Middle East was burning. ISIS targeted religious minorities with forced conversions, expulsions, death or captivity, particularly Christians. ISIS made its anti-Christian intentions clear in its magazine Dabiq: “We will conquer your Rome, break your crosses, and enslave your women, by the permission of Allah, the Exalted.”

A report dated March 9, 2016 submitted to former Secretary of State John Kerry by the Knights of Columbus and In Defense of Christians, entitled Genocide against Christians in the Middle East, laid out the particulars of the horrors ISIS was inflicting upon the dwindling Christian population. The report cited, for example, an estimate by Melkite Catholic Archbishop Jean-Clément Jeanbart of Aleppo, placing “the number of Christians kidnapped and/or killed in his city as in the hundreds, with as many as ‘thousands’ killed throughout Syria.”

In 2011, there were approximately 1,250,000 Christians in Syria. There were less than 500,000 in 2016. Some of those Christians not killed by ISIS have been forced to pay a tax to the Islamic terrorists. ISIS has also destroyed churches and Christian shrines. However, Obama never sought to protect Christians who were being massacred and displaced. Indeed, he sharply criticized the suggestion that persecuted Christians be given preference for admission as refugees. He said that “when I hear political leaders suggesting that there would be a religious test for which person who’s fleeing from a war-torn country is admitted… that’s shameful.” Obama added: “That’s not American, it’s not who we are.”

In Obama’s last full calendar year in office, 99 percent of the 12,587 refugees from Syria admitted to the U.S. were Muslims, while less than 1 percent were Christians. Estimates of the Christians’ proportion of the total population of Syria have ranged from 5 to 10 percent since the onset of the Syrian civil war. Muslims made up 87% of Syria’s total population. Thus Muslims were being admitted to the United States in a greater proportion than even their huge majority percentage of the total population in Syria itself. Obama clearly discriminated against Christians and other non-Muslim minority religious groups who needed refugee status protection the most, while vastly favoring the one group of refugees from Syria and other Middle Eastern countries who needed protection the least– Sunni Muslims.

After declaring that Christians have “been horribly treated” by the refugee program under Obama, President Trump has sought to reverse the Obama administration’s disgraceful discrimination against Christian refugees. Unfortunately, he has been stymied to date by the courts.

The best way for President Trump to stop the genocide being perpetrated by ISIS on Christians and other religious minorities will be to continue on his course of completely annihilating the monster that Obama’s feckless policies allowed to grow out of control in the first place.