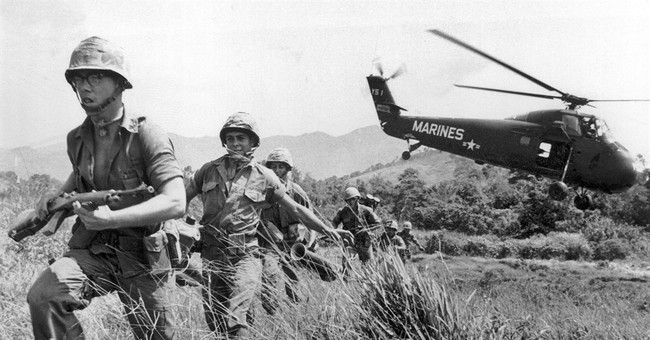 Almost a half-century ago, in 1968, the United States seemed to be falling apart.

The Vietnam War, a bitter and close presidential election, antiwar protests, racial riots, political assassinations, terrorism and a recession looming on the horizon left the country divided between a loud radical minority and a silent conservative majority.

The United States avoided a civil war. But America suffered a collective psychological depression, civil unrest, defeat in Vietnam and assorted disasters for the next decade — until the election of a once-polarizing Ronald Reagan ushered in five consecutive presidential terms of relative bipartisan calm and prosperity from 1981 to 2001.

It appears as if 2017 might be another 1968. Recent traumatic hurricanes seem to reflect the country’s human turmoil.

After the polarizing Obama presidency and the contested election of Donald Trump, the country is once again split in two.

But this time the divide is far deeper, both ideologically and geographically — and more 50/50, with the two liberal coasts pitted against red-state America in between.

Century-old mute stone statues are torn down in the dead of night, apparently on the theory that by attacking the Confederate dead, the lives of the living might improve.

All the old standbys of American life seem to be eroding. The National Football League is imploding as it devolves into a political circus. Multimillionaire players refuse to stand for the national anthem, turning off millions of fans whose former loyalties paid their salaries.

When the bullets started flying in Las Vegas none of the police officers took a knee.

SNL’s Michael Che called President Trump a “Cheap Cracker.” If a conservative comedian referred to President Obama with a racial slur on national TV would they still have a job?

After 8 years of Obama’s lies and failures leading to genocide.

Last week Secretary of State Rex Tillerson announced that ISIS’s “fraudulent caliphate in Iraq and Syria is on the brink of being completely extinguished,” and credited “an aggressive new strategy led by the president.” President Trump trusted his military to carry out a robust strategy to quickly eliminate ISIS’s control of territories from which it could plan and direct terrorist attacks worldwide. As Defense Secretary Jim Mattis explained last May, “First, he delegated authority to the right level to aggressively and in a timely manner move against enemy vulnerabilities. Secondly, he directed a tactical shift from shoving ISIS out of safe locations in an attrition fight to surrounding the enemy in their strongholds so we can annihilate ISIS.”

Former President Barack Obama had allowed the ISIS cancer to metastasize in the first place, leading to the killing, maiming, kidnapping and sexual enslavement of many thousands of innocent men, women and children. That is because Obama initially considered ISIS a “J.V. team” and then failed to prosecute a meaningful counter-strategy to quickly eliminate the ISIS scourge before its killing machine could become a regional and then a global threat. There has been huge slaughter and a global security threat unleashed thanks to Obama’s handling of ISIS, and the reverse of that trend under President Trump.

END_OF_DOCUMENT_TOKEN_TO_BE_REPLACED

What did NBC News know, and when did it know it?
After Harvey Weinstein and Ben Affleck, no one’s looking worse in this Hollywood sex scandal than NBC “News.”

The Peacock Network has gone chicken!

They had the Weinstein story, cold, and first, but they spiked it, to protect their fellow traveler, the gross 300-pound Democrat schlockmeister.
I know, you are “saddened and angry,” as Ben Affleck would put it, by this news.
After all, this is the same very ethical network that has employed, or continues to employ, such extinguished “journalists” as Brian Williams, the Rev. Al Sharpton, Low IQ Mika, Comrade Chris Matthews, F. Chuck Todd, Chelsea Clinton and Joe “Deliverance” Scarborough, as well as the noted fiction writer Mike Barnicle.
When the news breaks, they fix it. If it’s news to you, it’s news to them. The Peacock Network has gone chicken.
NBC News has always had a soft spot for millionaire Democrats accused of rape. Almost 20 years ago, they had the first on-camera interview with Juanita Broaddrick, who credibly accused Bill Clinton of raping her, but that story was spiked on orders of … Brian Williams.