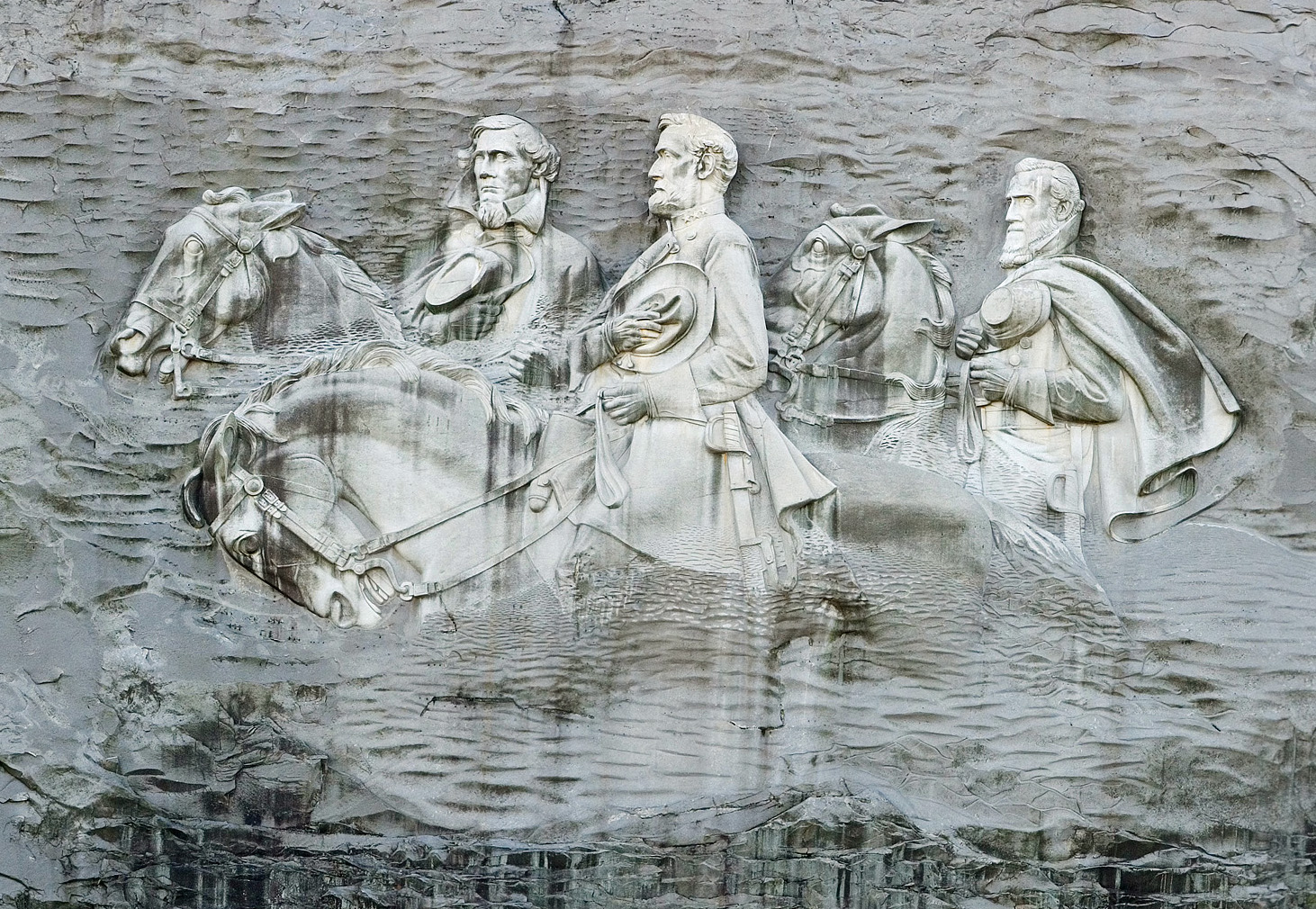 Although a fight currently waged against metal and mortar, the glee attending the left’s dismantling of New Orleans’s Confederate statuary has taken on the stink of bloodlust.  Down go the statues of Beauregard, Davis, and Lee; up come the cries for those of Jackson, Washington, and Jefferson to follow.  Never mind who owned a slave and who didn’t; among them were men who, at the certain risk of their lives, liberty, and sacred honor, brought about that document that’s served to liberate mankind generally.

Perhaps ironically, it was 18th-century slaveholders among those now under attack who did more than anyone in history to end slavery.  With human bondage now resurgent on certain parts of the world, one feels compelled to inquire what the Confederate monument destroyers are doing to abolish it.  Google that, and you’ll find that they have little argument with slavery as pursued by its third-world practitioners.  This may be because the know-nothing ninjas of the regressive left regard slavery as less criminal than are those dead white males who established the right of all to freely pursue happiness.  With that the case, it’s not just a handful of old American icons who are to be laid low by the Caterpillar’s blade; nor is it just that American history itself is slated to be reworked into a Spanish-language comic novella of Approved Ideology (bad as that is).  Rather, it’s that our Taliban-toadying leftists intend to reduce the Constitution and its Bill of Rights to the same rubble that the Bamiyan Buddhas now occupy.

It’s in the pursuit of this aim that Beauregard’s statue has fallen – for he and the others who are to follow now form the Constitution’s guardians.  To slander and revile them is to slander and revile it, and to physically strip them away from history and law is to do no other than expose it to the same fate.

Just as leftists hate the founders for their elevation of mankind to a state of freely functioning citizens, they hate the document created to codify the idea that principle rather than passion serves as the wellspring of liberty.  The left is all about passion – mercurial, virtue-signaling, subjective, contradictory, hypocritical, and fashion-driven passion.  Leftists might talk a good game, but in keeping with the Leninist doctrine of ends justifying means, they’ll freely abandon whatever noble principle they espouse one day to accomplish some nefarious goal the next.  That’s how those who pretend to advocate for women and gays come to support Islamist doctrine; how those who pretend to advocate for free speech and non-violence become violent in free speech’s denial; and how those who espouse equality before the law have come to have the most restrictive view of who is to be tolerated as most any of us have seen in a lifetime.

So by all means, let us switch out Lee for Che and tear down U.S. Grant for H.C. Minh.  While we’re at it, let’s give the statues of Washington and Jefferson the same earthward tumble that planted Saddam’s bronze proboscis in the turf.  “Après eux, le deluge,” as Napoleon might have said of this phenomenon – to which Churchill might have added that we’re neither at “the beginning of the end, nor even the end of the beginning” of its pursuit.  For once the founders have felt the bulldozers’ bite, and after the schools bearing their names, and the currency bearing their likenesses, have been given the Stalinist heave-ho, the Constitution, the Bill of Rights, and the rule of law itself will be easy pickings.

BROOKLYN (CBS) – If the secret to a happy marriage is finding the right person, we can all stop looking. At least, according to “sologamists.” They’re part of a growing relationship trend, in which people are tying the knot to themselves.

Erika Anderson is one of them.

“I would describe it as women saying yes to themselves,” Anderson said. “It means that we are enough, even if we are not partnered with someone else.”

In many ways, the 37-year-old bride looked like any other on her wedding day. She wore a white dress and had a bouquet. Anderson looked stunning with the Brooklyn bridge and New York City skyline behind her.

Except when she walked down the aisle, no one was waiting for her. That’s just the way she wanted it.

Anderson said she grew tired of people asking why she was still single. So, in front of family and friends she married herself.

Self-marriage—or sologamy—is growing. Partly because it’s popping up in pop culture, like when an episode of ‘Sex and the City’ floated the idea.