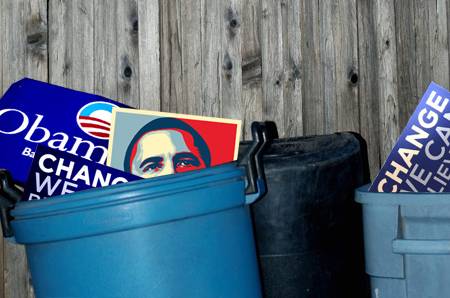 President Obama has no intention of fading away as Republican presidents typically do when they leave office.

Richard Nixon, Gerald Ford, Ronald Reagan, George H.W. Bush, and George W. Bush completed their presidencies and were then more or less silent on their successors’ performance in office.

However, Democrat former presidents Jimmy Carter and Bill Clinton are constitutionally incapable of shutting up and Americans have long suffered their bloviations.

Barack Hussein Obama, like Carter and Clinton, is a Democrat who adores the sound of his own voice.

President Barack Obama on Sunday started mapping out his vision of Democrats’ path back — and all but pledged to be part of it himself.

[…] Obama urged congressional Democrats not to follow Senate Majority Leader Mitch McConnell’s (R-Ky.) model of lockstep resistance against him eight years ago, but to quickly activate all over the country and avoid “micro-targeting.”

This came as Obama expressed a version of confidence about Trump that on Sunday had him saying, “reality will force him to adjust how he approaches many of these issues,” even as he revealed that he’d told the president-elect in their post-election Oval Office meeting to hire “a strong White House counsel” to help prevent the conflict-of-interest and corruption issues that many see potentially starting to take shape as Trump and his children continue to mix business dealings and transition policy decisions.

And though Obama said he wouldn’t get involved in every fight — including some fights likely to be about Trump and the Republican majorities in Congress ripping out his legacy — he very deliberately refused to say he’d hold to the tradition of presidents avoiding public comment or political attacks on their successors.

“I want to be respectful of the office and give the president-elect an opportunity to put forward his platform and his arguments without somebody popping off in every instance,” Obama said, but “as an American citizen who cares deeply about our country, if there are issues that have less to do with the specifics of some legislative proposal or battle but go to core questions about our values and our ideals, and if I think that it’s necessary or helpful for me to defend those ideals, then I’ll examine it when it comes.”

Obama’s robust self-esteem guarantees he’ll be in our lives for years to come.