Who believes that the Democrat attorney general will indict the Democrats’ only chance to win the presidency in November? If the powers-that-be wanted to do their job, they could have indicted Hillary Clinton by now.

Unsurprisingly, Attorney General Loretta Lynch won’t commit to following the FBI’s recommendation in the case of Hillary Clinton’s emails, however, she promised an independent review during a hearing Wednesday, when asked during a House hearing Wednesday.

You can take that to the bank.

“If the FBI makes the case that Hillary Clinton mishandled classified information and put America’s security at risk, will you prosecute the case? Do you know of any efforts underway to undermine the FBI investigation,” Rep. John Carter of Texas asked Lynch at the House hearing Wednesday.

Lynch didn’t say anything new about the inquiry, except to confirm that she has yet to receive any request from her staff to act one way or another on the case. She also said there is no pressure being put on the FBI as they investigate with 150 agents working on the case.

“With respect to our investigation into how information was handled by the State Department, how they handled classified information, as I’m sure you know that matter is being handled by career, independent law enforcement agents, FBI agents as well as the career, independent attorneys in the Department of Justice. They follow the evidence. They look at the law. And they’ll make a recommendation to me when the time is appropriate,” Lynch said.

“That matter is being handled by career independent law enforcement agents — FBI agents — as well as career independent attorneys in the Department of Justice,” Lynch told a House Appropriations subcommittee. “They follow the evidence, they look at the law and they’ll make a recommendation to me when the time is appropriate.”

“This will be conducted as every other case, and we will review all the facts and all the evidence and come to an independent conclusion as to how to handle it,” she maintained.

Does anyone believe this? Anyone? Anyone?

Lynch has donated $10,000 over the years to Democrat candidates to say nothing about her sworn testimony during her confirmation hearings that she serves at the pleasure of the president not the American people or the Constitution. 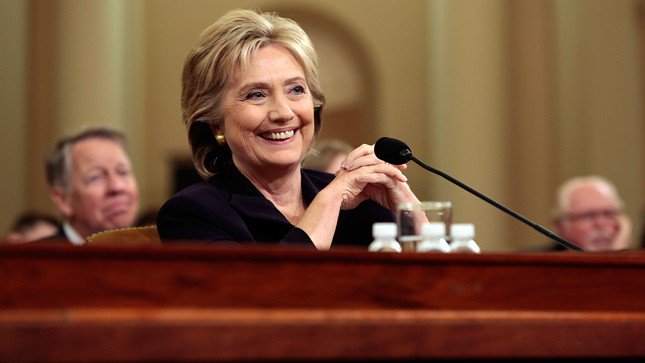 Jim Comey, head of the FBI doesn’t give a “rip about politics” allegedly.

Bets anyone? Hillary should have been indicted by now.

Hillary sure doesn’t seems worried. She is constantly up Obama’s butt telling him how perfect his ideas are and mimicking him during debates.