Speaking barely a day after the horrific terrorist attack in California, Obama-appointed Attorney General Loretta Lynch said at the annual Muslim Advocates annual Dinner that critics of Islam “will be prosecuted” if speech about Islam “edges” towards violence:

Attorney General Loretta Lynch on Thursday warned that the Justice Department could take aggressive action against people whose anti-Muslim rhetoric “edges towards violence and told the Muslim community that â€œwe stand with you in this.”

Lynch made it clear that she shares those concerns, but vowed to use the DOJ to protect Muslims from discrimination and violence. Noting the rise in violence against Muslims and mosques in the wake of the Paris attacks, Lynch added that, “When we talk about the First amendment we [must] make it clear that actions predicated on violent talk are not American. They are not who we are, they are not what we do, and they will be prosecuted.”

“My message not just to the Muslim community but to all Americans is ‘We cannot give in to the fear that these backlashes are really based on,'” Lynch said.

On the Muslim Advocates web site advertising the dinner and Ms. Lynch as the keynote speaker, it says under her photo that she is going to discuss the “priorities of the U. S. Department of Justice, particularly its efforts to combat anti-Muslim hate and discrimination”:

If you think it’s bad that Obama is threatening YOUR right to free speech, it’s not going to get any better if Obama gets his way in bringing tens of thousands of Muslims into the country as “refugees.”

How much things have changed within the last decade. 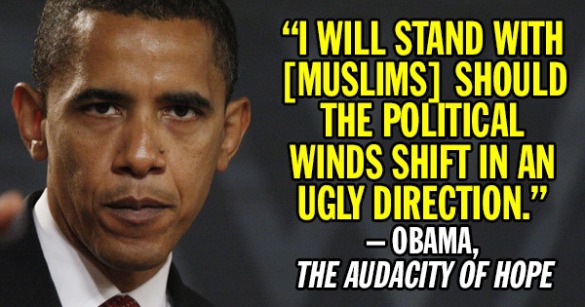