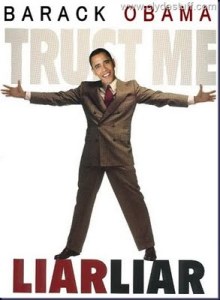 Now that the media have shown their eagerness to expose the “lies” of presidential candidate Ben Carson, they might want to review some of the nuggets they overlooked in the rise of Barack Obama. To be sure, there is no going back, but future generations of journalists might benefit from seeing how shamelessly the fourth estate transformed itself into the Democrats’ fifth column.

25.  “If I am the Democratic nominee, I will aggressively pursue an agreement with the Republican nominee to preserve a publicly financed general election.” Obama made this pledge in September 2007. He broke it in June 2008. He told the Washington Post he still supported the idea of public financing, but the current system was “broken” and favored Republicans who had “become masters at gaming” it. The media yawned.

23.  “We’ll have the negotiations televised on C-SPAN.” No fewer than eight times candidate Obama promised to air health-care negotiations on C-SPAN. Remember watching them?

22.  “Qaddafi threatens a bloodbath that could destabilize an entire region.” This was pure bunkum. The left has been selling “bloodbaths” successfully since the Spanish Civil War.

21.  “I intend to close Guantanamo, and I will follow through on that.”  Still waiting on this one.

20.  “But the debate is settled. Climate change is a fact.” Now if Obama could just get those 30,000 dissenting scientists an ObamaCare exemption, maybe he could shut them up.

19.  “This administration has done more for the security of the state of Israel than any previous administration.”  Barbra Streisand may have bought this nonsense, but Benjamin Netanyahu was not even tempted.

17.  “I’ve written two books. I actually wrote them myself.” Obama was that rare literary genius who couldn’t get his nouns and verbs to match.

16.  “The person I saw yesterday was not the person that I met twenty years ago.” If the media had discovered the “person” in question, Jeremiah Wright, before Iowa — and how did they miss him? — Hillary Clinton would likely be president.

15.  “My father left my family when I was two years old.” The “two years” created the illusion of a blessed multicultural union, but the mom hightailed it to Seattle within weeks of the birth.

14.  “My parents shared not only an improbable love. They shared an abiding faith in the possibilities of this nation.” In truth, about the only thing they shared was the Baby Daddy’s sperm — if that.

13.  “Under our plan, no federal dollars will be used to fund abortions, and federal conscience laws will remain in place.”  Believing Obama cost Democratic congressman Bart Stupak his career.

11.  “I believe that marriage is the union between a man and a woman.” The polls proved a more authoritative source than God on this one.

10.  “We’ve got shovel-ready projects all across the country.” Nearly three years after saying this, Obama conceded, “Shovel-ready was not as.. uh.. shovel-ready as we expected.” The audience burst out laughing. The unemployment rate at the time stood at 9.1 percent.

9.  “I didn’t set a red line.” Obama said this in regards to Syria after explicitly setting a “red line” and having his staff confirm the same. This double talk had the Norwegians looking up the number of the local repo man.

8.  “Not even a smidgen of corruption.” Obama shocked even O’Reilly with the sheer effrontery of this lie about the IRS scandal.

7.  “The Fast and Furious program was a field-initiated program begun under the previous administration.” The president told this whopper after spokesman Jay Carney got his knuckles rapped for telling the same lie.

6.  “No more secrecy.” Edward Snowden would seem to have a different take on this.5.  “Here’s what happened. You had a video that was released by somebody who lives here, sort of a shadowy character.” If nothing else, lying about the death of four valiant Americans helped rehabilitate Richard Nixon.

4.  “We revealed to the American people exactly what we understood at the time.” Lying about the original Benghazi lie only compounded the shame.

2.  “Transparency and the rule of law will be the touchstones of this presidency.” This double-barreled promise has been violated more wantonly than a goat at a Taliban bachelor party.

1. “I do solemnly swear (or affirm) that I will faithfully execute the Office of President of the United States, and will to the best of my Ability, preserve, protect and defend the Constitution of the United States.” Oh, man, Obama had his hand on the Bible for this one. May God have mercy on his soul.