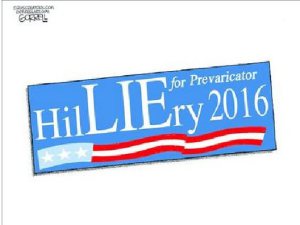 Does this woman have any shame?

Democratic presidential contender Hillary Clinton took offense to remarks by House Majority Leader Kevin McCarthy that the ongoing House select committee investigation into the Benghazi attacks is hurting her campaign, and used members of the U.S. military as political pawns in disparaging the probe.

Clinton appeared Wednesday on MSNBC’s “PoliticsNation” and told host Al Sharpton that McCarthy’s comment “demonstrates unequivocally that this was always meant to be a partisan political exercise.”

She then claimed the pursuit for answers to why four Americans died in the attack is somehow an affront not only to those who lost their lives, but to all members of the military.

“I feel like it does a grave disservice and dishonors not just the memory of the four that we lost, but of everybody who has served our country,” Clinton said.

But veterans weren’t buying the political spin that it’s disrespectful to expect Clinton to answer for her role in Benghazi.

A number of vets took to social media to denounce Clinton’s “flippant” attitude about Benghazi. Here’s a sampling of responses from Twitter: