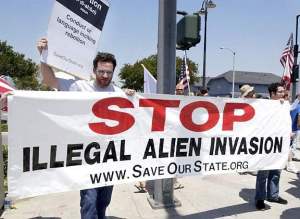 Photo via US Daily Review

Shortly before the dramatic rulings out of the Supreme Court this past week, the court made a very important decision to not hear a case and it resulted in the continuation of a policy where people here illegally can register to vote without proof of citizenship merely by using a federal form instead of a state form.

People here illegally can now get driver’s licenses in some states and they can apply for assistance, opening up avenues where they could easily register to vote.

The case, Kobach, et al. v. Election Assistance Commission (EAC), was not heard by the Supreme Court, presumably because they want another court decision on it, but as a result, the law stands and anyone can use the federal form to register without proof of citizenship.

“Arizona citizens can continue to participate in voter registration drives without worrying about not having proof of citizenship documents,” Shirley Sandelands, of the League of Women Voters of Arizona, said in a statement Monday.

The Supreme Court’s inaction on this case leaves in place the decision of the 10th Circuit Court of Appeals which ruled the EAC did not have to modify its form to meet state’s laws.

By not hearing the case, the Supreme Court effectively upheld the decision of the 10th Circuit Court of Appeals, which ruled against Arizona and Kansas in November 2014, saying the EAC did not have to modify its form to meet state laws. Under the federal form, would-be voters need only swear under penalty of perjury that they are citizens.

“This is a very big deal,” University of California Irvine Law Professor Rick Hasen wrote on his election law blog Monday. “Kobach had the potential to shift more power away from the federal government in administering elections toward the states,” he added.

The Supreme Court appears to be in the business of buoying up laws that support an overreaching executive that has previously shown disdain for states’ rights.

Every time a foreigner votes illegally, s/he is stealing the vote of one American.