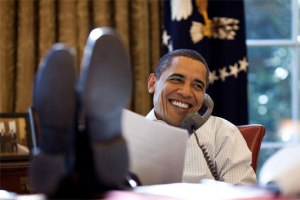 Tragically and with full malice aforethought, the beauty, simplicity and essential to thought subject of Logic is no longer taught in the US Public school system. As a note, little else that matters is now taught either. It was taught when I attended school. For the purposes of this column, I will deal with two forms of logic, as defined by the current 0n-line Merriam-Webster Dictionary: “a particular mode of reasoning viewed as valid or faulty” and “interrelation or sequence of facts or events when seen as inevitable or predictable.” I hope that these will assist those people who still cannot – according to their own words seem to fathom why Barack Hussein Obama does what he does and says what he says. Note: Too many of these (many high profile) and, ostensibly, Conservative individuals seem to be extremely well-educated but – due to their statements of incredulity over Obama’s actions or lack thereof – are quite apparently lacking the power of even the most basic practice of logical reasoning. That leaves us with Occam’s Razor or “the solution amongst competing hypotheses with the fewest assumptions [the one that possesses the most facts] should be selected.” Obama is destroying the USA and replacing its legal citizens with Muslims and other illegals, in order to create a new country of his making.. Logic requires rational reasoned thought…not emotion and false premises. Thus…I shall attempt to explain it to them for yet one more time. The rest of you – Conservatives specifically – understand perfectly well what’s going on.

END_OF_DOCUMENT_TOKEN_TO_BE_REPLACED

(Washington, DC) – Judicial Watch announced today that the Obama administration finally turned over hundreds of pages of documents about the military response to the September 11, 2012, terrorist attack on the U.S. Special Mission Compound and other facilities in Benghazi.  The documents, which are heavily blacked out (redacted), confirm that the U.S. Military, through its U.S. Africa Command (AFRICOM) drafted orders for a military response to the attack, specifically “to protect vital naval and national assets.”  Other documents suggest that the military, hours after the attack, tied the assault to a group supporting “an Islamic state” that wanted to attack U.S. interests in Libya in retaliation for a drone strike on an al-Qaeda leader.