A few months ago, we reported on a potential situation out of California that many speculated would point to the possibility of Michelle Obama running for Dianne Feinstein’s Senate seat. Feinstein was rumored to be retiring after 2015. 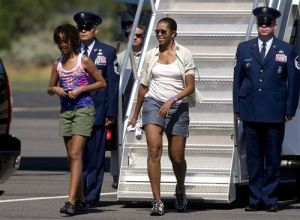 Real estate brokers in California even spoke about a fantastic estate that the Obamas had in escrow – a $4.35 million dollar custom-built home that had all the luxuries necessary for a liberal senator to reside quite happily.

The rumor cooled once Feinstein announced she wasn’t retiring anytime soon. But it heated right back up last week when California’s other liberal senator, Barbara Boxer, announced she was no longer seeking office as of 2016. (H/T TPNN)

This may have been the plan all along, but again, it’s only speculation at this point. When the Obamas say goodbye to the White House next year, the very specific reports coming from high-end real estate professionals strongly point to a move to the Golden State.

The Wall Street Journal recently reported that handlers for the Obamas were scouting properties in the Palm Springs area.

Should this all happen and should Michelle run for office, the chances of her securing a seat are probably quite good. The scenario is somewhat reminiscent of former first lady Hillary Clinton’s successful senate win in New York – with the only difference being that her husband was still president at the time.

To get even more hypothetical, should Michelle win the seat and spend twelve years or so in the Senate, she could entertain the possibility of a presidential run, depending on her popularity at the time.

The thought of any of this happening is enough to make any conservative queasy. But with Sen. Boxer’s recent and somewhat unexpected announcement, it’s better to start preparing for the possibility rather than having it sprung on American voters out of nowhere.

We’ll be keeping track of any developments in this situation very, very closely.

2 thoughts on “BREAKING: This News Could Mean America Might Face a “Senator Michelle Obama””