From the “Mountain out of a Molehill” files comes the story of how outraged the left is over the picture of Trig Palin standing on the family dog.

“OUTRAGEOUS!” scream the ninnies on the left:

“It’s odd that anyone — let alone a mother — would find it appropriate to post such a thing, with no apparent sympathy for the dog in the photo.”

“Then again, PETA, along with everyone else, is used to the hard-hearted, seeming obliviousness of this bizarrely callous woman.”

And there was more:

She pointed to an interview Palin gave in 2008 at a farm while turkeys were slaughtered in the background as an example of past differences between the animal rights group and the former vice presidential candidate.

Anyone who’s ever lived a Thanksgiving knows turkeys are never slaughtered for food. God forbid.

The so-called “Friends of Animals” piled on:

“It’s no surprise to Friends of Animals that Sarah Palin is so insensitive she thinks a Black Lab should be tolerant of a child who isn’t told to not put his full weight on top of the dog’s back by standing on him,” President Priscilla Feral said in a statement. “How lazy of Sarah Palin not to move the dog out of the way and teach her child the right lessons.”

Ironically, PETA had no such contempt for Ellen DeGeneres, PETA’s Woman of the Year in 2009, who once posted this image: 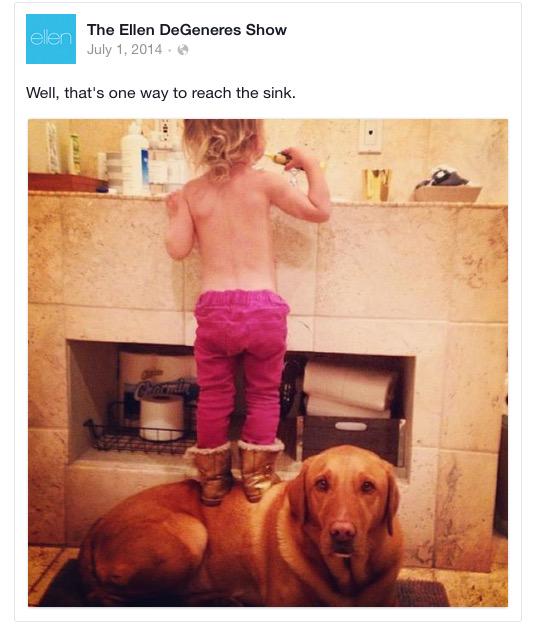 Not one to suffer idiocy well, Sarah Palin fired back:

Palin pointed out that PETA has never said anything about a photo the organization’s “Woman of the Year” Ellen Degeneris posted of a little girl similarly using a dog as a booster to reach the sink. She also noted that PETA was also conveniently silent when President Barack Obama admitted to having actually eaten dog meat. 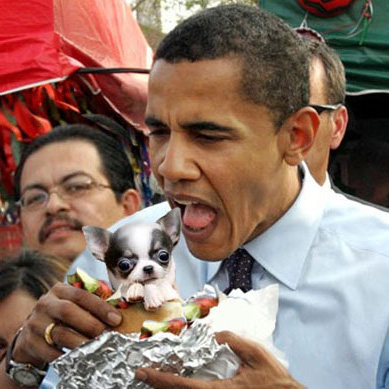 She continued the pounding:

Aren’t you the same anti-beef screamers blogging hate from your comfy leather office chairs, wrapped in your fashionable leather belts above your kickin’ new leather pumps you bought because your celebrity idols (who sport fur and crocodile purses) grinned in a tabloid wearing the exact same Louboutins exiting sleek cowhide covered limo seats on their way to some liberal fundraiser shindig at some sushi bar that features poor dead smelly roe (that I used to strip from our Bristol Bay-caught fish, and in a Dillingham cannery I packed those castoff fish eggs for you while laughing with co-workers about the suckers paying absurdly high prices to party with the throw away parts of our wild seafood)? I believe you call those discarded funky eggs “caviar”.

I am a lifelong dog owner. I can hardly remember a time when I did not have a dog. I love dogs. Our kids all stood on the larger dogs and laid on our dogs and pulled their ears and poked them. The dogs loved the kids. This “outrage” is pure crap. It’s politics, pure and simple. It bald hypocrisy. If not for double standards, the left would have no standards. Even an idiot can see that the Palin dog is not in any discomfort and if the dog truly were being hurt I guarantee you it would move.

The fact that that dog stays right there is testament to both the dog and the family. That dog is one of the family and is treated as such.

When I read the asinine comments from PETA, FoA and the left wingers at Politico, a couple of things become immediately apparent. Most of the dimwitted comments come from people who 1. don’t have kids, 2. don’t own a dog and never have, and 3. they are frequently adolescents who know everything about everything without the benefit of experienced anything.

Sarah should have had Trig stand on a pile of aborted fetuses.

The left would have cheered. PETA would have made Palin Woman of the Year 2015.

Did I mention I belong to PETA?

People Eating Tasty Animals, that is.