What has happened to America?  Please show these numbers to anyone that does not believe that the United States is in decline.  It is time for all of us to humble ourselves and face the reality of what has happened to our once great nation.  For those of us that love America, it is heartbreaking to watch the foundations of our society rot and decay in thousands of different ways.  The following are 50 facts that show how far America has fallen in this generation, but the truth is that this list could have been far, far longer…

#1 According to a survey that was just conducted, only 36 percent of all Americans can name the three branches of government.

#3 Even if you include same-sex couples in the numbers, the marriage rate in the United States is at a 93 year low.

#4 For the first time ever, single Americans make up more than half the U.S. population.

#5 31.1 percent of American young adults in the 18 to 34-year-old age bracket are currently living with their parents.

#6 One out of every ten teen girls in America engages in “self-harm”.  Cutting and burning are the most common forms that this “self-harm” takes.

#8 A different survey discovered that 64 percent of American men of all ages view pornography at least once per month.

#10 One survey discovered that 25 percent of all employees that have Internet access in the United States visit sex websites while they are at work.

#12 An astounding 30 percent of all Internet traffic now goes to adult websites.

#15 Americans consume a whopping 80 percent of all prescription painkillers.

#17 Approximately 60 million Americans have a problem with alcohol addiction.

#19 Of all the major industrialized nations, America is the most obese.  Mexico is #2. 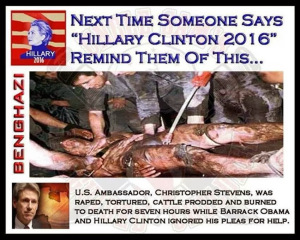 stevens being tortured in bengazi1, while Washington dithered

NEXT TIME ANYONE CALLS FOR ANY PROGRESSIVE MARXIST DEMOCRAT OF OFFICE, REMEMBER CHRISTOPHER STEVEN AND THE 13 HOURS HE SUFFERED AT THE HANDS OF THE PEOPLE OBAMA AND CLINTON FUNDED!

A U.S. security team in Benghazi was held back from immediately responding to the attack on the American diplomatic mission on orders of the top CIA officer there, three of those involved told Fox News’ Bret Baier.

Their account gives a dramatic new turn to what the Obama administration and its allies would like to dismiss as an “old story” – the September 11, 2012 Benghazi attacks that killed U.S. Ambassador Christopher Stevens and three other Americans.

Speaking out publicly for the first time, the three were security operators at the secret CIA annex in Benghazi…

“But a police source raised the question of why the men — who had earlier been seen walking along a track near bushland off New Illawarra Rd — were at a location clearly marked as restricted Commonwealth land.” Why indeed? Were they “sightseeing,” as other Muslims discovered in sensitive areas have claimed? Will Australian police monitor the movements of these men in the future, or would that be “Islamophobic”?

END_OF_DOCUMENT_TOKEN_TO_BE_REPLACED

Hats off to the highly esteemed countermoonbat Ann Barnhardt:

The message has become all the more appropriate since these billboards went up along I-70 in Junction City, Kansas in 2010. This is no time to let up.

Previously unpublished correspondence between Hillary Clinton and the late left-wing organizer Saul Alinsky reveal new details about her relationship with the controversial Chicago activist and shed light on her early ideological development.

Clinton met with Alinsky several times in 1968 while writing a Wellesley college thesis about his theory of community organizing.

Clinton’s relationship with Alinsky, and her support for his philosophy, continued for several years after she entered Yale law school in 1969, two letters obtained by the Washington Free Beacon show.

END_OF_DOCUMENT_TOKEN_TO_BE_REPLACED

There were dozens of Americans that were in Benghazi on that fateful night in September of 2012, when four Americans were murdered in a terrorist attack.  Very few have come forward to share their version of events though.

You would think that all of these people would want to tell their story, particularly in light of so many unanswered questions about that night.  But President Obama has used an “orchestrated strategy” to censor Benghazi survivors and their families, with many of them “gagged” by non-disclosure agreements, or silenced by threats.  Sadly, more than a dozen of those brave souls have died over the past two years, without the chance to share their story.

Now Texas Congressman Louie Gohmert is confirming some of the suspicions surrounding the quiet survivors and witnesses of Benghazi, claiming that some of them have been threatened to keep quiet about what they know, according to Fox News.

END_OF_DOCUMENT_TOKEN_TO_BE_REPLACED

One small issue, she refers to Ali Muhammad Brown as a “lone wolf” killer. Except he was not, and a lot of media is missing that he did his jihadi killing of teenager Brendan Tevlin with the help of at least two other men. Why is this especially disturbing? Because 10 years ago, Brown was a member of a terror ring recruiting American converts to jihad.

It can not be denied or ignored any longer. Islamic terrorists such as ISIS, Boka Harram, Hamas etc, have declared war on all infidels ( non-Muslims) world-wide.

I pray that every American man, woman and child finally accept the fact that there are millions of Muslims dedicated to eliminating freedom and taking over the world in the name of Allah.

This article presents the preaching of Islamic leaders and actions of their fanatic followers. They make their fanatic obsession very clear. One world. One religion, ruled by Islamic law.

My question to you: How many times must you hear their own words before you realize that hoards of barbaric fanatic Muslims will joyously slaughter you and your family?