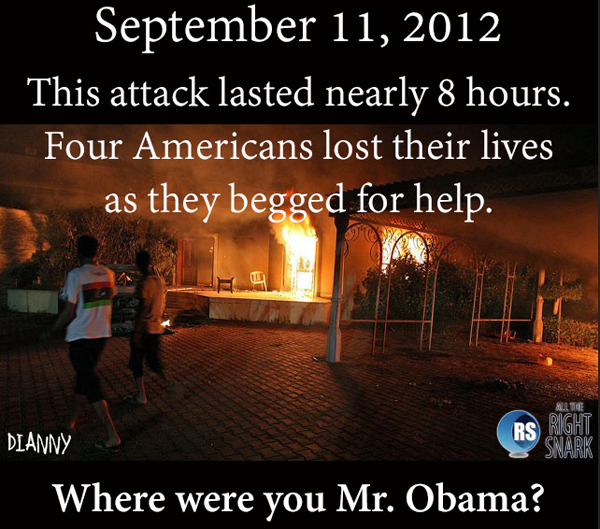 Sean Smith, a 34-year-old information management officer…emailed a friend: “Assuming we don’t die tonight. We saw one of our ‘police’ that guard the compound taking pictures.” Hours later, he was dead.—Chris Stephen “US consulate attack in Benghazi: a challenge to official version of events”

”…we have four dead Americans. Whether it was because of a protest or because guys outside for a walk one night decided togo kill some Americans. What difference at this point does it make?” —Former Secretary of State Hillary Clinton

“I’d like to convey the following message to Obama. Listen, Obama: We are Egyptian women. You are listen, Obama? Shut up your mouth, Obama. Shut up your mouth, Obama! Our message to you, you donkey: No matter what you do, we will not restore the ousted president [‘Muslim Brotherhood’ leader Mohammed Morsi].”—Anonymous Egyptian woman on viral video

Former Secretary of State Hillary Clinton’s Kabuki theater performance last year of faux outrage was one for the books, no doubt. On second thought…perhaps it was not phony outrage after all: how dare the Senate question her—her. The nerve.

In any event, not only did she dutifully provide the various media propaganda outlets with an emotive performance worthy of Hitler (”The indignation. And then, the tears in her eyes….”), but along the way she managed to plant not just one, but two, red herrings designed to mislead and misdirect: that is, the Benghazi attacks were the result of (1) protests, or (2) guys out for a walk.

Alas for Ms. Clinton, neither of her red herrings stands up to much scrutiny. Perhaps if they did it would indeed not make much of a difference which one caused the attacks in Benghazi on 9/11/12—but the real reason(s) make a great deal of difference.

Would you say that an element within the US government aiding and abetting America’s enemies during a time of war makes a difference? I would, and essentially that is what we are dealing with here.

I am not referring to the arms shipments to the Syrian rebels that were funneled from Libya via Turkey and Lebanon (although that is, or rather should be, of great concern to Congress). What I am chiefly concerned with is the aborted prisoner swap of Ambassador Stevens for “Muslim Brotherhood” icon Sheikh Omar abdel Rahman (the “Blind Sheikh”)—currently serving a life sentence in the US for his role in the deadly 1993 WTC bombing.

For those of you who may not know, the imprisonment of the “Blind Sheikh” is very much a cause  célèbre amongst Muslims, at least among its more radical factions. For example, according to a “CBS News” article:

Al Qaeda’s current leader, Ayman Al-Zawahri, has repeatedly invoked Rahman [the “Blind Sheikh”] as a reason for kidnapping and killing Westerners. In an undated two-hour videotape posted last October on militant forums, he said that abducting nationals of “countries waging wars on Muslims” is the only way to free “our captives, and Sheik Omar Abdel Rahman.”

In the months leading up to the 9/11/12 attack in Benghazi there were numerous disturbances tied directly to the imprisonment of Rahman. (In fact the riot in Cairo that occurred just prior to the Benghazi attacks, and was blamed on a video, was originally a “Free Rahman” rally that was hijacked by thugs supposedly irate over said video).  In an article posted in early July 2012 (”Outrage builds as Egypt presses for release of blind sheik behind ‘93 WTC attack”), Perry Chiaramonte reported that:

In Cairo, President-elect Mohamed Morsi proclaimed to hundreds of thousands of supporters in Tahir Square on Friday that he will gain the release of Rahman…. “It’s disgusting for a head of government to state in his inaugural speech that a man who attempted to commit mass murder should be freed,” Rep. Peter King, R-N.Y., told FoxNews.com. “The fact that he said this in his first speech says to me that this is from the heart….”

If you are unaware of former Egyptian President Morsi’s ties to the “Muslim Brotherhood” (MB), or the MB’s history of Islamic jihad (both the overt and stealth varieties), then I suggest that you get cracking on your homework—time’s a wastin’. You might want to research the MB/CIA connection and/or the MB/Obama connection while you’re at it. Keep in mind that there is a plethora of inaccurate and misleading information on the Web—caveat emptor.

The idea that Morsi and the MB were involved with the attacks in Benghazi is nothing new. Flames were still smoldering and smoke wafting when Walid Shoebat posted a video made during the attack which had one of the attackers shouting ”Don’t Shoot us! We were sent by Morsi!” Egyptian Cynthia Farahat has pointed out that the words were spoken “in the dialect of Upper Egypt.”

We are dealing here with the plaintive cry of someone who was expecting a cakewalk, being confronted with deadly armed resistance courtesy of former SEALs Glen Doherty and Tyrone Woods. That was not the way things were supposed to go down. (A third man, David Ubben, a State Department diplomatic security agent, was severely injured while on the rooftop with Woods and Doherty, but he, like all of the other survivors of the Benghazi attack, has been muzzled and hidden away by the Obama Administration—now why would the Obama Administration do that do you suppose)?

Articles suggesting that the Benghazi attacks were the result of a kidnapping attempt gone awry began surfacing not long after 9/11/12. The scenario was this: with the collusion of certain elements within the US government, Ambassador Stevens was to be kidnapped and held in ransom for the “Blind Sheikh.” In due time Stevens would be exchanged for Rahman, and everyone goes home happy. Morsi is happy, Rahman is happy, Obama is happy, Clinton is happy…everybody’s happy, happy, happy. Except it didn’t work out that way—darn SEALs.

Initially I treated the Stevens/Rahman swap as nothing more than an interesting possibility—but then as the Obama Administration’s stonewalling became ever more frantic and grim, I began to think that the kidnapping/swap scenario was more and more probable. I am now (after a lot of sifting wheat from chaff) at the point where I consider it to be a certainty.

Perhaps the biggest factor in my coming to accept the veracity of the Stevens/Rahman swap scenario has been its acceptance by Four-Star Admiral James “Ace” Lyons (USN ret). Among his many accomplishments, ADM Lyons was Commander in Chief of the US Pacific Fleet (“the largest single military command in the world”), and you can believe me when I tell you that the US Navy does not hand out four stars and command of its Pacific Fleet to just anyone that comes down the pike.

I do not personally know ADM Lyons, but I think that one can safely assume that he is a no nonsense hard charger, with both feet planted firmly on the ground (or sea, as the case may be). In short, when ADM Lyons says that the Benghazi attack on 9/11/12 was the result of a plan to swap Ambassador Stevens for the “Blind Sheikh,” I would say that you can take that to the bank.

Although ADM Lyons is retired, I believe that I am not going out on a limb when I say that he is still plugged into a network of “movers and shakers” in the know. He would not have made the claims that he has regarding Benghazi unless he was d—n good and sure that they were legit.

In a recent article by him sub-titled “The event was no surprise, and the massive cover-up appalls,” ADM Lyons writes:

According to my source’s in-country contacts, there never was any intention to kill Stevens. He was supposed to be kidnapped and held as a hostage in exchange for the release of the blind sheik, Omar Abdel Rahman. It should be recalled that this was the No. 1 objective of then-Egyptian President Mohammed Morsi in his Washington visit in 2012.

In an interview held a little over a year ago, ADM Lyons explained when and where he first went public with his beliefs regarding the attempted kidnapping—it was on the “Lou Dobbs Tonight” television show:

Lou asked me, “What do [you] think went on? What [do you] suspect happened?” I said, “Well, if I had to speculate, I believe this was a bungled…kidnapping attack, to kidnap Ambassador Stevens, and hold him in exchange for the Blind Sheikh.” You know there’s been a lot of pressure, certainly from Morsi; that’s one of his objectives, to get the Blind Sheikh released. Now, again, [Dobbs] asked me what I thought, and I speculated, because nothing else made sense to me. We know that Ambassador Stevens was concerned over his safety there. I mean, why would he stay there—first of all, why was he even there on the night of 9/11/12? You have the significance of the date of 9/11—most places, people hunker down. Then we had a lot of not only tactical, but strategic warning of this attack.

The Obama Administration (with the all too willing collusion of “journalistic” propaganda outlets) has surrounded the Benghazi story with lies, obfuscations, and blatant cover-ups, all designed to muddy the waters and hide the truth—and Congress will not ferret out the truth unless “we the people” hold their feet to the fire, and do it with a will.

What we have in the “Beltway Bubble” these days is a viper’s nest of traitors. To paraphrase Sir John Harrington: when a government is permeated with treasonous behavior from top to bottom, who is going to call it treason?

I have neither the time nor space to connect the dots right now regarding the ongoing stealth jihad underway in the good ol’ US of A. Suffice it to say that America has had the wool pulled over its eyes for some time, and unless “we the people” tear off our blindfold, we will wake up to find that we are in the same situation as “Eurabia,” and I don’t know about you, but “Amerabia” is not the country that I want to pass on to future generations.

At some point “we the people” have to stop pointing our fingers at “them,” and put the responsibility for the mess our country is in upon our own shoulders, and be about the serious business of cleaning house. Insisting on hearing the truth about Benghazi would be a good place to start.

3 thoughts on “The Benghazi Difference”