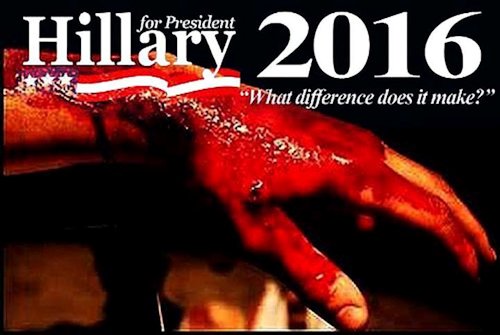 The only difference between Hillary and Obama is Hillary wears pantsuits.

Scandal after scandal, coupled with an ongoing contempt for the law and the Constitution, demonstrated by high-level officials and the president himself, point to one deeply troubling conclusion: the Obama administration may be the most corrupt administration ever inflicted on the American public. And while the mainstream media have done a remarkable job deflecting much of that reality, even they cannot keep up with the avalanche of disturbing revelations that arise, seemingly on a daily basis.

END_OF_DOCUMENT_TOKEN_TO_BE_REPLACED

A  self-professed jihadist who screams “alahu akbar” while murdering 13 people is  actually not engaging in jihad.

So  says a military judge in the trial of Nidal Hasan who attacked a gathering at  Fort Hood in November of 2009, killing 13  soldiers and wounding 40.

END_OF_DOCUMENT_TOKEN_TO_BE_REPLACED

NEW YORK – President Obama’s half-brother in Kenya could cause the White House more headaches over new evidence linking him to the Muslim Brotherhood in Egypt and establishing that controversial IRS supervisor Lois Lerner signed his tax-exempt approval letter.

In a news report on Egyptian television of a Gebali speech, translated by researcher Walid Shoebat, Gebali said she would like “to inform the American people that their president’s brother Obama is one of the architects of the major investments of the Muslim Brotherhood.”

As the military (with the support of secular groups that don’t want an Islamist state) battles the Muslim Brotherhood in Egypt and Americans argue over how to react, we should look back at history to understand why we should support the military as the lesser of two evils and hope for its success.  Those who know the history of the Muslim Brotherhood and see the murderous attacks it has launched on the homes, businesses, schools, and churches of Coptic Christians, who represent about 10 percent of the population, will recognize that we have seen this type of behavior before.

The Brotherhood is simply using the same tactics and ideology of the political party that it allied itself with in the 1930s and 40s: the Nazi Party.  What is happening to the Coptic Christians being beaten, kidnapped, and killed all over Egypt is similar to what happened to Jews in Germany during Kristallnacht on November 9-10, 1938, when Jews were killed and beaten and their homes, stores, schools, and synagogues ransacked, looted, and demolished in Germany and Austria.