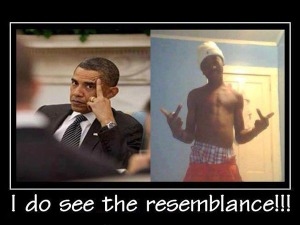 Consider the following regarding the  city of Detroit:

It takes an hour for police to respond to a 911  call.

Only a third of its ambulances are  drivable.

One-third of the city has been  abandoned.

Evidently 50 years of governance by compassionate  Obama community organizer types have driven out the business class and now there  is no one left to rail against.

Make that, “If Obama had a country, it would look  like Detroit”

There have been many lawsuits challenging Barack Obama’s eligibility to be President—most based on the fact that Obama is not a natural born citizen, his father being a Kenyan. Other lawsuits challenge the validity of Obama’s PDF long-form birth certificate, riddled with strange anomalies like multiple layers and eight different fonts.

The lawsuits have all crashed and burned in flames for two reasons: 1. The court hearing the lawsuits have treated the cases as a joke instead of a valid question of Constitutional requirements. And 2. The plaintiffs haven’t had Reed Hayes on their side.

END_OF_DOCUMENT_TOKEN_TO_BE_REPLACED

Some of the best pronuncements of a person’s soul are brief and in her own words. Here they are, with just two snippets pull-quoted below.

Three minutes of reality about the Obamunists’ proposed ambassador of Antiamerica to the United Nations, Samantha Power:

1. Mourned is how old, authentic America are the “free and independent states” as declared in our national charter: “There’s the United States, which doesn’t allow itself to be hemmed in by international law.”

2. (Stammering for the way to say it): “If the war on terrorism is the defining event of our time, can we really persist in having no country from the Middle-East, no country with much of an Islamic tradition at all, represented on the Security Council in any kind of permanent way? It needs attention.”

And, ironic how she as well as Obama decried America’s aggressiveness overseas. That is, before they came into power to spread their “disruption,”as Obama and Frances Fox Piven refer to it — for the sake of empire according to global hegemonists’ plans under the false banner of “responsibility to protect.” And what a surprise, so much Muslim Brotherhood influence in and out of D.C….

Remember when Obama famously (or infamously) said “If I had a son, he’d look like Travyon”?

That was March 2012, right after an altercation between George Zimmerman and Trayvon Martin ended in Martin’s shooting death. Presidents do not typically interject themselves so personally in murder cases like this.

While this case has been used in all kinds of political ways to further various agendas, Truthstream Media has preferred not to report on it because, overall, we feel it is purposefully being pushed in the 24/7 news cycle to distract people from the bigger, more tyrannical issues taking place in high levels of government that are directly impacting every single one of us living in this country every day.

In short, this really isn’t about Martin himself or even race, as much as some would like to make it out to be.

Now that Zimmerman has been found not guilty and the shooting ruled a self-defense, Obama has come forward to take his personal involvement in Trayvon’s death one step further. It’s splashed all over the news today that Obama held a press conference on it, where he clarified his son statement with, “Trayvon Martin could have been me 35 years ago.”

END_OF_DOCUMENT_TOKEN_TO_BE_REPLACED

In a letter to Zimmerman’s attorney, former Local 6 legal analyst Mark O’Mara, Pompano Pats in DeLand said it’s offering a free firearm to Zimmerman after hearing media reports that he could not obtain his Kel-Tec PF-9 from authorities.

“Upon receiving your confirmation that he is well within his legal rights to concealed carry, our company would like to offer Mr. Zimmerman a free firearm. We currently have the same model in stock, or he could (choose) another weapon suitable for concealed carry,” the letter states.

It also says, “We have read numerous reports of death threats against your client and believe no good would come from harming him.”

The letter, which also says the company is not trying to make a political statement, was signed by Pompano Parts President Pat Johnson.

After Saturday’s not guilty verdict was read, rallies, marches and demonstrations in support of Martin have been held across the county and many more are scheduled this weekend.