Barack Obama has “already held more re-election fundraising events than every elected president since Richard Nixon combined.” Yet, despite the fact that he has been campaigning almost non-stop since the 2010 election, aside from trying to steal credit from the SEALs for killing Osama Bin Laden, you very seldom hear Obama talk about his record. This is especially noteworthy because like him or hate him, Obama has passed a lot of legislation. 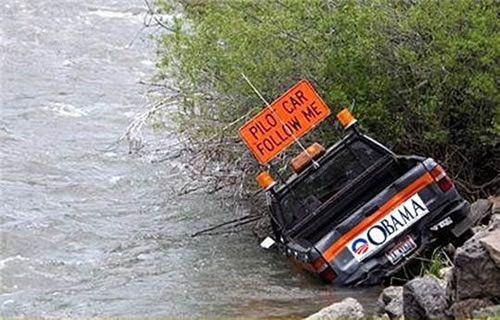 So, if Barack Obama has such an extensive record, why is it that Republicans are the ones that are always talking about it while Obama tries to steer the conversation to anything else? Simple: Obama is a failed President.

2) Obama spent hundreds of millions in taxpayer dollars to promote the Chevy Volt and said he had a goal of seeing a million electric cars in the U.S. by 2015. If that was going to happen, Volts would be flying off the showroom floor as opposed to the meager 7,700 that were sold last year — before production was halted this year.

3) Judging by the number of times Barack Obama attacked George W. Bush for high gas prices and Obama’s insistence that alternative fuels are a viable alternative to gasoline, you’d expect plentiful, cheap gas at under $2.00 a gallon as opposed to more than a doubling of the price of gas to $3.80 per gallon.

4) If Obama’s decision to set a timetable in Afghanistan and ignore the recommendations from the generals about how many troops to send made sense, we’d be winning, not losing in Afghanistan.

5) Mexican criminals are supposed to be in jail today because of Operation Fast and Furious. Instead, the Obama Administration ended up putting guns that were used to kill more than two hundred Mexicans and an American citizen in the hands of Mexican cartels while Eric Holder may be about to face contempt charges because he refuses to cooperate with the congressional investigation.

6) Hillary Clinton famously pressed the “reset” (overcharge) button with the Russians. Had that worked, Russia wouldn’t be helping Iran build nuclear weapons and threatening to make pre-emptive attacks on our missile defense sites.

7) Obama spent more than 75 billion dollars of taxpayer money to directly address the mortgage crisis outside of the hundreds of billions that he (along with Bush) injected into the system via TARP. So, is it handled? Is the housing market back? Have “too big to fail” Freddie and Fannie been forced to dramatically reduce the number of mortgages they hold to help prevent a future crisis? No, on all counts. Although the mortgage crisis was the decisive factor that helped Obama permanently pull ahead of McCain in the end, Obama has done very little of significance to help most homeowners over the long term or to prevent a future housing crisis.

8) Obamacare was supposed to reduce the deficit, give almost universal coverage, and everyone was supposed to be able to keep his own health care plan if he wants it. Yet, according to the CBO “it will add 700 billion dollars to the deficit over its first 10 years, 3-5 million people will lose their health care, and 30 million people still won’t have health coverage.”

9) When he was running for office, Obama said, “I refuse to leave our children with a debt they cannot repay, and that means taking responsibility right now, in this administration, for getting our spending under control.“ So, our AAA rating should still be in place, the deficit should be significantly lower than in the Bush years, and we should be closing in on a balanced budget by now.

10) The unemployment rate has been mired above 8% for more than 3 years now. However, according to the Obama Administration’s own projections, the unemployment rate should be all the way down to 5.5% by now because of the nearly trillion dollar stimulus it pushed through with no Republican votes in the House and only three Republican votes in the Senate